Comments (0)
Add to wishlistDelete from wishlist
Cite this document
Summary
The paper "The Trend Analysis and Future Income Levels in BRIC Countries" presents the aftereffects of the economic boom which have raised the income brackets in Brazil, Russia, India, and China. It seems the BRIC Countries' middle-class income bracket will surpass the G7 countries' one…
Download full paperFile format: .doc, available for editing
HIDE THIS PAPERGRAB THE BEST PAPER97% of users find it useful 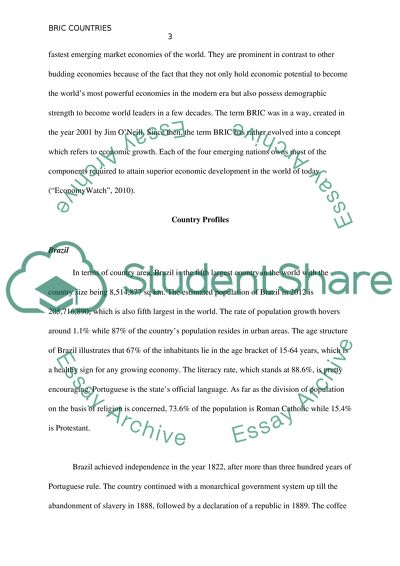 Download file to see previous pages The term BRIC was in a way, created in the year 2001 by Jim O’Neill. Since then, the term BRIC has rather evolved into a concept which refers to economic growth. Each of the four emerging nations owns most of the components required to attain superior economic development in the world of today.
In terms of country area, Brazil is the fifth largest country in the world with the country size being 8,514,877 sq km. The estimated population of Brazil in 2012 is 205,716,890; which is also the fifth largest in the world. The rate of population growth hovers around 1.1% while 87% of the country’s population resides in urban areas. The age structure of Brazil illustrates that 67% of the inhabitants lie in the age bracket of 15-64 years, which is a healthy sign for any growing economy. The literacy rate, which stands at 88.6%, is pretty encouraging. Portuguese is the state’s official language. As far as the division of population on the basis of religion is concerned, 73.6% of the population is Roman Catholic while 15.4% is Protestant.
Brazil achieved independence in the year 1822, after more than three hundred years of Portuguese rule. The country continued with a monarchical government system up till the abandonment of slavery in 1888, followed by a declaration of a republic in 1889. The coffee exporters used to politically control the country until Getulio Vargas assumed power in 1930. In the year 1985, Brazil acquired freedom from the military and populist rule. Ever since it has set itself on the expedition of industrial and agricultural development.
The economy of Brazil revolves around hefty and well-managed sectors of agriculture, manufacturing, mining, and services; which have made Brazil an economic leader in South America. Since the year 2003, Brazil has gained strength on a macro-economic basis, with the piling up of foreign reserves in addition to the betterment of debt position. Brazil has been one of the initial economies to demonstrate a recovery after the 2008 recession. By securing the position of the world’s seventh biggest economy in 2011, Brazil has been able to comfortably outshine United Kingdom (“CIA”, 2012). ...Download file to see next pagesRead More
Share:
Tags
Cite this document
(The Trend Analysis and Future Income Levels in BRIC Countries Term Paper, n.d.)
The Trend Analysis and Future Income Levels in BRIC Countries Term Paper. Retrieved from https://studentshare.org/macro-microeconomics/1397006-briefly-describe-the-economy-of-the-bric-countries

In th...
8 Pages(2000 words)Case Study
sponsored ads
Save Your Time for More Important Things
Let us write or edit the term paper on your topic "The Trend Analysis and Future Income Levels in BRIC Countries" with a personal 20% discount.
GRAB THE BEST PAPER

Let us find you another Term Paper on topic The Trend Analysis and Future Income Levels in BRIC Countries for FREE!