Comments (0)
Add to wishlistDelete from wishlist
Cite this document
Summary
The circumstances within the life of Sofia Petrovna brought to life the Russian mindset reality during the Stalin purges. According to the…
Download full paperFile format: .doc, available for editing
HIDE THIS PAPERGRAB THE BEST PAPER91.8% of users find it useful 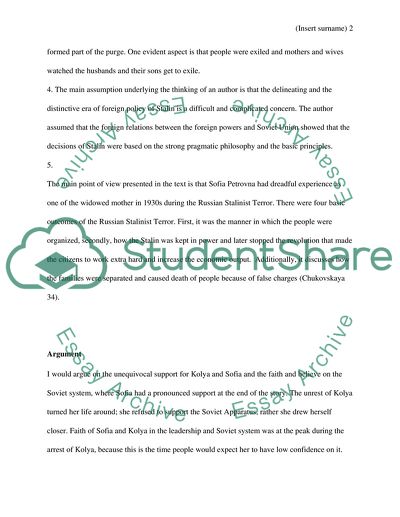 Sofia Petrovna Critical Reading The key question that the addresses is the necessity and importance of women to carry out socially useful work (Chukovskaya, 87). The circumstances within the life of Sofia Petrovna brought to life the Russian mindset reality during the Stalin purges. According to the author, the character of Sofia is demonstrated to be than of an intelligent and diligent woman who loved her work as typewriter working at the publishing house.
2
The most important information in the book is a fictional account of Lydia Chukovskayas depiction on the useful life of Sofia. Sofia Petrovna was a wealthy doctor who genuinely tried to adjust to the Soviet manner of life. Additionally, the author portrays the communist lifestyle; despite having roots as an upper class background, she accepted the communist party.
3.
The main conclusion in the article is that there are awful realities that exist in Great Purge of Stalin. There are two perspectives that one can take in portraying the people’s struggle that formed part of the purge. One evident aspect is that people were exiled and mothers and wives watched the husbands and their sons get to exile.
4. The main assumption underlying the thinking of an author is that the delineating and the distinctive era of foreign policy of Stalin is a difficult and complicated concern. The author assumed that the foreign relations between the foreign powers and Soviet Union showed that the decisions of Stalin were based on the strong pragmatic philosophy and the basic principles.
5.
The main point of view presented in the text is that Sofia Petrovna had dreadful experience as one of the widowed mother in 1930s during the Russian Stalinist Terror. There were four basic outcomes of the Russian Stalinist Terror. First, it was the manner in which the people were organized, secondly, how the Stalin was kept in power and later stopped the revolution that made the citizens to work extra hard and increase the economic output. Additionally, it discusses how the families were separated and caused death of people because of false charges (Chukovskaya 34).
Argument
I would argue on the unequivocal support for Kolya and Sofia and the faith and believe on the Soviet system, where Sofia had a pronounced support at the end of the story. The unrest of Kolya turned her life around; she refused to support the Soviet Apparatus, rather she drew herself closer. Faith of Sofia and Kolya in the leadership and Soviet system was at the peak during the arrest of Kolya, because this is the time people would expect her to have low confidence on it.
Works Cited
Chukovskaya, Lydia. Sofia Petrovna. Illinois: North Western Press, 1967. Read More
Share:
Tags
Cite this document
(“Sofia Petrovna, by Lydia Chukovskaya Assignment Example | Topics and Well Written Essays - 500 words”, n.d.)
Retrieved from https://studentshare.org/history/1664354-sofia-petrovna-by-lydia-chukovskaya

CHECK THESE SAMPLES OF Sofia Petrovna, by Lydia Chukovskaya

...? The character chosen is Celie’s stepdaughter-in-law, Sofia. Although a main character, she is often ignored or dismissed by many readers. Sofia is dismissed often due to her strength and stubbornness. When compared next to the main character, Celie, Sofia comes off as crude. However Sofia is one of the characters in The Color Purple that grows, but never really loses her core personality. She is strong. Sofia is the opposite of Celie’s character. Celie has a soft outside, but an inner strength. Sofia has a harsh outside, but a compassionate inner side that emerges as the book progresses. Sofia did not conform to the...
2 Pages(500 words)Essay

Relationships between individuals were profoundly altered by the experience of terror and genocide. Using Lydia Chukovskaya's

...formula: prisoners lose human traits. Free people were losing their best qualities. Conclusion In conclusion, it is necessary to state that in the times of terror human relationships are altered due to the fact that people are afraid of losing their lives. Fear changed the normal interpersonal relationships in Auschwitz and in Soviet Union of 1930s. However, irrespective of the similarity, the two cases are quite different. In Auschwitz people understood (if not accepted) the change because they were prisoners who were losing human traits. On the contrary, people of Soviet Union did feel the change in relationships but they could not understand why free people acted in that way. Works Cited Levi, Primo. Survival in Auschwitz. New York:...
5 Pages(1250 words)Term Paper

IN THE ESTATES OF NICKY AND LYDIA GRAY

...In The E s of Nicky And Lydia Gray It appears that Nicky Gray and Lydia Gray were not married and had no children. The Will left by them is subject to the provisions of Wills Act 1837, Administration of Estates Act 1925, and Inheritance (provisions for Family and Dependants) Act 1975. As per s.32 (1) of the Administration of Estates Act 1925, funeral expenses, debts and liabilities of the deceased are a first charge on their estate. Accordingly, joint funeral expenses, expenses for reception incurred by John Gray and proportionate cost of the mausoleum for 2 bodies contracted for by their cousin Maud should be equally shared by recovering from the estates of Nicky Gray and Lydia Gray before other debts if any are paid. However... in...
10 Pages(2500 words)Case Study

Distinguishing Any Parallels and Variations within The Texts, Discuss To What Extent Female Power Could Be Said To Exist In The Colour Purple [Alice Walker] A

...). “Modesty is invisibility,” said Aunt Lydia. ‘Never forget it. To be seen – to be seen is to be penetrated (p. 28).” Having established here some of the basic parallels and contrasts, there is a prevailing theme of misogamy. Women, in either story, are basically for that of the male pleasure. This leads to yet another parallel in the two works, since each work presents women in a light of pre-flight, escape from the circumstances that hold them enslaved. Although in Atwood’s story, the notion of a male relationship for the young Red is not an unthinkable one; she is not adverse to the idea of the male touch, and even considers men in a “rescue,” scenario, and quickly develops a fondness for the Commander’s...
7 Pages(1750 words)Essay

Advice Sofia and her father on the legal position

...David Jones was a coin dealer who specialised in American coins, and traded under the "HOCKLEY COINS". Sofia Ali was looking to buy a present for her father, who was a keen coin collector. One day Sofia visited "HOCKLEY COINS" and asked to see a selection of American coins. Her Father had mentioned that he would like to acquire an example of a "Birmingham cent". Apparently, at the turn of the century various American coins were minted in Birmingham and these coins bore the letter "B" in their inscription. "Birmingham" coins were a rarity, with a market value considerably higher than non Birmingham coinage of the same period. David Jones showed her an 1885 cent coin which bore the letter "B" in the...
6 Pages(1500 words)Essay

...﻿Harriet Jacob’s Work by Lydia Maria Child Harriet Jacobs was a slave girl, who put down the trials and tribulations of her life in her memoir entitled “Incidents in the life of a slave girl, written by herself.” The book is a heart wrenching narrative of the life of Jacobs, marked by exploitation, especially sexual, at the hands of her master. Jacobs was the first writer to expose this unsavory aspect of a young girl slave, who was an easy prey for her male masters. These incidents were written under the pen name of Linda Brent, and upto the 20th century, it was generally accepted that the book had been authored by Lydia Maria Child. Child was a white abolitionist editor who was recruited to edit this...
2 Pages(500 words)Essay

...Compare/Contrast: Ken and Lydia and Tyler & Holly Solomon by Robert Mapplethorpe While the late 20th century witnessed a shift away towards photography as a major means of artistic expression, a number of artists continued to push the medium forward. One of the most seminal photographers during this was period Robert Mapplethorpe. Mapplethorpe’s work explores a wide array of subject matter including flowers, celebrities, and a thematic concern with homosexuality (Veith). His work has been both heralded for its incisive social commentary, as well as criticized as being exploitative and sensational. This essay compares and contrasts two of Mapplethorpe’s work Ken and Lydia and Tyler, and Holly Solomon....
2 Pages(500 words)Essay

The Fisher King and Lost in Translation

...and open-firing on a crowd in a yuppie restaurant. It turns out that Robin Williams was there with his wife, and it was because of Jack’s advice that Robin Williams’ wife was killed by gunfire. Here the diegetic sounds at the beginning are canned but very relevant to the story. One can see too that the lyrics to the song ‘Hit the Road Jack’ seem on hindsight to have been a premonition of things to come for the man. He would literally hit the road after being traumatized by the shooting in the restaurant, realizing that is was his advice on radio that led the man to commit the crime. He had been undone by a sense of guilt, and went on a downward spiral (Martino; Gilliam). In a later scene, with Jack trying to get Parry hooked up with...
5 Pages(1250 words)Essay

...Real World Negotiation 2 Introduction Sofia and I have been friends for a long time. We are close friends, so we share secrets about our personal lives. Sofia’s boyfriend, Echo, and I are also good friends. Some years back, after dating Echo for a year, Sofia told me about a party that she had attended and apparently kissed some random guy. It remained a secret between us. Months later, I received a call from Sofia. Amid sobs, she told me of her discovery that Echo was still communicating with his ex-girlfriend. That was against Sofia’s wish and Echo understood that. She had seen Echo’s emails to her on his personal computer. The pair,...
2 Pages(500 words)Assignment

Read Fallen Forests by Lydia Huntley Sigourney (pages 46-47) Compare and contrast the language and themes of Fallen Forests, The Compost, and Song of the Redwood. How do these authors interpret man's interactions with nature How do they expect

... Lydia Huntley Sigourney and Walt Whitman about Nature and Its Value As it is known, the preservation of the environment and the natural balance is one of the urgent problems of modern society. Various authors have considered this topic, focusing on certain aspects of the relationship between humans and nature. Such poems as “Fallen Forests” by Lydia Huntley Sigourney and “This Compost” and “Song of the Redwood Tree” by Walt Whitman make the reader think about the intrinsic value of nature and responsibility of people towards nature. Both authors demonstrate their love for nature, but one can point out the main difference between them. Sigourneys language is rather apocalyptic, because the author focuses on the negative effects... people are...
2 Pages(500 words)Essay
sponsored ads
Save Your Time for More Important Things
Let us write or edit the assignment on your topic "Sofia Petrovna, by Lydia Chukovskaya" with a personal 20% discount.
GRAB THE BEST PAPER

Let us find you another Assignment on topic Sofia Petrovna, by Lydia Chukovskaya for FREE!