Comments (0)
Add to wishlistDelete from wishlist
Cite this document
Summary
The economics of the US was undergoing a big blow from the depression that did not seem to end and the rates of unemployment were an all-time high similarly to the prices of food and other commodities. The Roosevelt’s administration came up with the aspect called “New…
Download full paperFile format: .doc, available for editing
HIDE THIS PAPERGRAB THE BEST PAPER94.2% of users find it useful 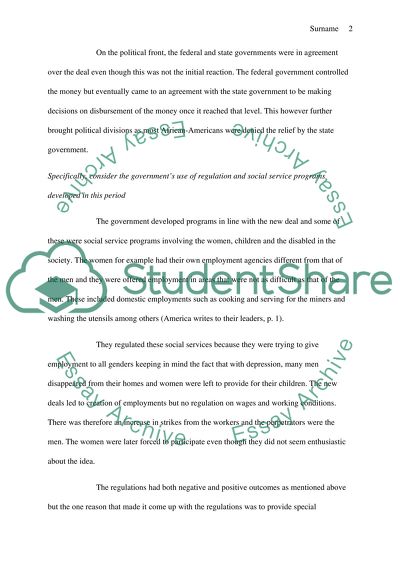 The New Deal How did the New Deal reshape American politics and economics between 1929 and 1940?
The economics of the US was undergoing a big blow from the depression that did not seem to end and the rates of unemployment were an all-time high similarly to the prices of food and other commodities. The Roosevelt’s administration came up with the aspect called “New deal” which featured a series of changes and improvements in the government both federal and state and which would in turn better the lives of the people and counteract the effects of the depression. The new deal was done in two phases and both had effects on the economic and political wellbeing of the Americans.
On an economic front, the lives of the Americans started improving as they gained employment even though the wages were still lower and the working conditions were deplorable (I am Marching, p. 3). Employment was created through the numerous projects the federal government authorized through various acts. There were acts such as Works Progress Administration (WPA) which offered jobs to hundreds and thousands of the unemployed working in the projects such as building bridges, post offices and schools amongst many others. There was the Federal Emergency Relief Administration set up to provide relief in terms of money through the local governments among many others (Out of Many, p. 634).
On the political front, the federal and state governments were in agreement over the deal even though this was not the initial reaction. The federal government controlled the money but eventually came to an agreement with the state government to be making decisions on disbursement of the money once it reached that level. This however further brought political divisions as most African-Americans were denied the relief by the state government.
Specifically, consider the government’s use of regulation and social service programs developed in this period
The government developed programs in line with the new deal and some of these were social service programs involving the women, children and the disabled in the society. The women for example had their own employment agencies different from that of the men and they were offered employment in areas that were not as difficult as that of the men. These included domestic employments such as cooking and serving for the miners and washing the utensils among others (America writes to their leaders, p. 1).
They regulated these social services because they were trying to give employment to all genders keeping in mind the fact that with depression, many men disappeared from their homes and women were left to provide for their children. The new deals led to creation of employments but no regulation on wages and working conditions. There was therefore an increase in strikes from the workers and the perpetrators were the men. The women were later forced to participate even though they did not seem enthusiastic about the idea.
The regulations had both negative and positive outcomes as mentioned above but the one reason that made it come up with the regulations was to provide special considerations to different categories of people in the government. The social services programs provided relief food and money to the most needy and helpless in society ensuring they did not die of hunger while the others went to work or to seek employment.
Work Cited
Faragher, John, Mari Buhle, Daniel Czitrom and Susan Armitage. Out of Many, volume 2 (6th Ed.). New York: Prentice Hall, 2008.
Iowa, Elkader. Americans write to their leaders. 1934.
Sueur, Meridel. I am marching. 1934. Read More
Share:
Tags
Cite this document
(“Journal Assignment Example | Topics and Well Written Essays - 500 words - 16”, n.d.)
Retrieved from https://studentshare.org/history/1661605-journal

...Electronic commerce al affiliation Electronic commerce The drastic development in information technology has resulted into significant effects in the use of computer. Cyber bullying and harassment, through the use of computers, has become common in this information and digital age, resulting into unethical behaviors. Computer harassment involves the use computer to cause disturbance, or pose threats as a result of differences in race, color, gender, disability, or sexual orientation. On the other hand, cyber bullying entails the use of computers to cause psychological harm to others through threats, resulting into adverse effects on their lives and also career. There has been an increase in cyber bullying and computer harassment... commerce...
1 Pages(250 words)Essay
sponsored ads
Save Your Time for More Important Things
Let us write or edit the assignment on your topic "Journal" with a personal 20% discount.
GRAB THE BEST PAPER

Let us find you another Assignment on topic Journal for FREE!