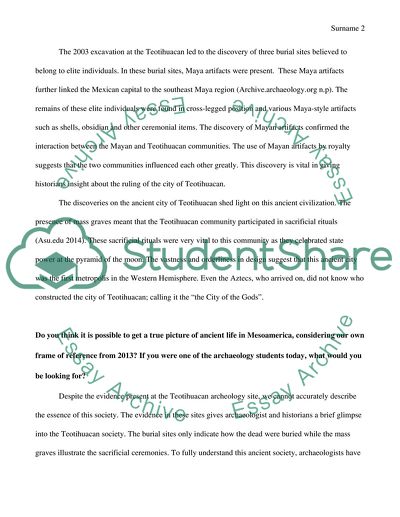 The Pyramid of the Moon excavation project at the ancient of Teotihuacan Historians regard the ancient ofTeotihuacan as the first Mexican city. The city had two great pyramids: the pyramid of the sun and the pyramid of the moon. Excavation aiming at unlocking the secrets of the pyramid of the moon started in 1998. The first secret that the excavation uncovered was a burial chamber of an early ruler of the city (Archive.archaeology.org n.p). The ruler’s burial site was ceremonial as it contained burial offerings in the form of artifacts such as obsidian, birds, greenstone figurines and other quality offerings. In addition to this burial site, more than 1200 other burials took place at the site.
The archeologists further discovered how the city came into being; through a lava-tube cave. These caves and other physical features, according to the archaeologists, symbolized the gods and ancestors of Mesoamerica (Archive.archaeology.org n.p). Other than their religious significance, the features were also used as a focal point for settlement and other activities. The city expanded at a fast pace during the second century until the A.D 600. The city was later torched down around A.D 750 by invaders (Archive.today n.p).
The archaeologists, from their findings, concluded that the city’s residents were multiethnic and worshipped a goddess. The discovery of the burial site was the breakthrough of 1999, which was after the discovery of various mass graves from 1982 to 1989.
The 2003 excavation at the Teotihuacan led to the discovery of three burial sites believed to belong to elite individuals. In these burial sites, Maya artifacts were present. These Maya artifacts further linked the Mexican capital to the southeast Maya region (Archive.archaeology.org n.p). The remains of these elite individuals were found in cross-legged position and various Maya-style artifacts such as shells, obsidian and other ceremonial items. The discovery of Mayan artifacts confirmed the interaction between the Mayan and Teotihuacan communities. The use of Mayan artifacts by royalty suggests that the two communities influenced each other greatly. This discovery is vital in giving historians insight about the ruling of the city of Teotihuacan.
The discoveries on the ancient city of Teotihuacan shed light on this ancient civilization. The presence of mass graves meant that the Teotihuacan community participated in sacrificial rituals (Asu.edu 2014). These sacrificial rituals were very vital to this community as they celebrated state power at the pyramid of the moon. The vastness and orderliness in design suggest that this ancient city was the first metropolis in the Western Hemisphere. Even the Aztecs, who arrived on, did not know who constructed the city of Teotihuacan; calling it the “the City of the Gods”.
Do you think it is possible to get a true picture of ancient life in Mesoamerica, considering our own frame of reference from 2013? If you were one of the archaeology students today, what would you be looking for?
Despite the evidence present at the Teotihuacan archeology site, we cannot accurately describe the essence of this society. The evidence in these sites gives archaeologist and historians a brief glimpse into the Teotihuacan society. The burial sites only indicate how the dead were buried while the mass graves illustrate the sacrificial ceremonies. To fully understand this ancient society, archaeologists have to look for concrete evidence such as their building structures, types of settlement, trading sites and other descriptive evidence.
The aforementioned archaeological evidence is more descriptive and reliable than the burial sites and artifacts. To fully understand a society, one has to know how they interacted with each other through trade and other economic activities. The religious beliefs and practices are also vital in understanding how the Teotihuacan society lived.
In conclusion, archaeologists should gather more evidence regarding the Teotihuacan society in order to fully understand the civilization.
.
Works Cited
Archive.archaeology.org,. New Tomb At Teotihuacan - Archaeology Magazine Archive. N.p., 2014. Web. 20 Oct. 2014.
Archive.archaeology.org,. Maya Goods In Teotihuacan Tomb -Archaeology Magazine Archive. N.p., 2014. Web. 20 Oct. 2014.
Archive.today,. Teotihuacan Home Page. N.p., 2014. Web. 20 Oct. 2014.
Asu.edu,. Defining Teotihuacan - Findings Shed New Light On Ancient City. N.p., 2014. Web. 20 Oct. 2014. Read More
Share:
Tags
Cite this document
(“Assignment Example | Topics and Well Written Essays - 500 words - 176”, n.d.)
Assignment Example | Topics and Well Written Essays - 500 words - 176. Retrieved from https://studentshare.org/history/1661599-assignment