Comments (0)
Add to wishlistDelete from wishlist
Cite this document
Summary
“In the Union army, over 179,000 African American men served in over 160 units, as well as more serving in the Navy and in support positions” (Escott). In their attempt to safeguard…
Download full paperFile format: .doc, available for editing
HIDE THIS PAPERGRAB THE BEST PAPER94% of users find it useful 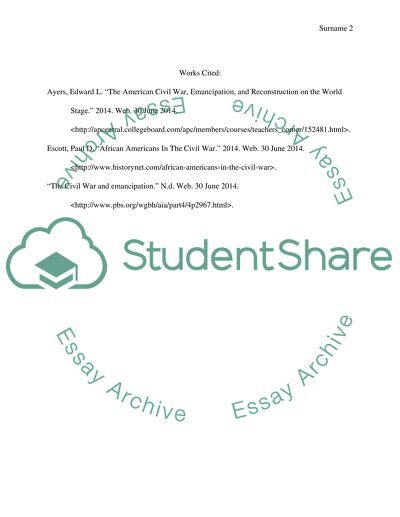 Q Ans. The status of slavery started to change with the victory of the Republicans in the elections. “In the Union army, over 179,000 African American men served in over 160 units, as well as more serving in the Navy and in support positions” (Escott). In their attempt to safeguard the supremacy of white men and continue the black slavery, fundamentalist Southerners selected secession whereas the Northerners were of the view that the Union’s collapse will bring the likelihood of a democratic republican government to an end. These events led to the Civil War and set the stage for the termination of slavery in America. The goal of antislavery Republicans was to restore the Union and abolish slavery. They wanted the war to continue until the attainment of these goals. Originally, Lincoln did not recognize emancipation as the war’s goal, but he was burdened by the escape of several slaves in the South (“The Civil War”). With the fate of the Union being at stake, Lincoln was primarily committed to save the Union. His prime concern was to save the Union with or without freeing the slaves. Events led to the surrender of Lincoln to the antislavery republicans’ pressure. This made slavery the prime factor in Civil War and made the abolition evolve as a strategy to preserve the Union and put an end to the rebellion. Therefore, the president drafted emancipation’s general proclamation which was finally issued on 22 September 1862 and signed and approved by Lincoln on 1 January 1863. Abolitionists were concerned after the war that since the emancipation proclamation was derived from the wartime powers of Lincoln, its power might wane. End of slavery in the US was an event of global significance (Ayers).
Works Cited:
Ayers, Edward L. “The American Civil War, Emancipation, and Reconstruction on the World
Stage.” 2014. Web. 30 June 2014. .
Escott, Paul D. “African Americans In The Civil War.” 2014. Web. 30 June 2014.
.
“The Civil War and emancipation.” N.d. Web. 30 June 2014.
. Read More
Share:
Tags
Cite this document
(“War 1812 Assignment Example | Topics and Well Written Essays - 250 words - 1”, n.d.)
War 1812 Assignment Example | Topics and Well Written Essays - 250 words - 1. Retrieved from https://studentshare.org/history/1651282-war-1812

CHECK THESE SAMPLES OF War 1812

...? The War of 1812  SSG Eric Harrington  25N3O-004-11  The War of 1812 Introduction: One of the long forgotten and least talked about wars in the history of America is the War of 1812 (historycentral.com, n.d.). The War of 1812 happened between Great Britain and the United States. The war commenced on June 1812 and continued up to the spring season of 1815, despite the fact that the war was theoretically terminated in December 1814 with a peace treaty signed in Europe. The war mainly took place along the border of Canada...
6 Pages(1500 words)Essay

...The Mexican war of 1812 Introduction The Mexican war of 1812 falls among the fiercest wars recorded in the history of America. John Freemont, the then chosen commander got orders from Washington DC to attack the Mexican convert. Several causes led to the War of 1812 between United States and British Empire (United Kingdom and Britain’s Indian allies) from 1812 to 1815. Historians assert that the trade restrictions imposed by Britain in order to impeded United States from trading with France agitated the US since they were illegal under the existing international law. Britain was engaged in...
3 Pages(750 words)Essay

...Order: 284756 The War of 1812 Though both France and England placed a host of restrictions on American trade with the "enemy", the British policy of impressments proved most egregious to the United States (Roark, et al; pp. 218). "Between 1807 and 1812, around 2,500 men were captured by British commanders and impressed into Royal Naval service." (Roark, et al; pp. 218). Events reached a crisis point when three American sailors were killed when a British frigate fired on the Chesapeake, an American ship that had picked up some British deserters, in American territorial waters (Roark, et al; pp.218). Though many Republicans clamored for war, the American Army and Navy were...
4 Pages(1000 words)Essay

...War of 1812 The war of 1812had a great impact on national identity of the nation and its unity, self-determination and sovereignty. The war of1812 can be characterized as one of the milestone events in American history which led to formation of the state and the nation. It is considered that this war is the second War of Independence as it has similar roots and consequences for the American nation1. The historical significance of the war of 1812 is that it opened new opportunities for the American people to fight for personal freedom and liberty, independence and self-governance. Similar to the...
2 Pages(500 words)Essay

...Battle of Thames – 5 October 1813 The Battle of Thames took place in Thames, Ontario, near Moraviantown which was home to Delaware Indians who had become Christians. The battle took place on 5 October 1813 and while it was a small battle in military terms, the outcome had many serious consequences for the overall War of 1812 (The Royal Canadian Geographical Society, 2011). The War of 1812 had initially stemmed from a litany of complaints based on British blockading of Europe under Napoleon. The Americans had vessels stopped and searched; civilians and soldiers were taken from ships and some were even forcibly taken into British service. As well, the economy of the...
2 Pages(500 words)Assignment

...War 1812 Studies so far conducted contend 1812 war was quite a transformative event for the US. Although a number of Americans were against the nation’s decision of going to the war, at its conclusion most of them felt more rejuvenated than before (Cantor). This is because through the war, US realized that it ought to make a number of changes in the field regarding state’s security. It is due to this fact that to date US has global recognition of having the most powerful military force. This is because after the war US replaced state militias, most of which were unreliable, with an army that was not only skilled but also...
1 Pages(250 words)Assignment

...The War of 1812 War is definitely one of the most harmful events possible but sometimes war can turn into an efficient fundamental for further development of some side of the conflict. The War of 1812 was that kind of war which laid the groundwork for postwar economic growth of the United States. The history of the war is full of different aspects but the fact is that war can be called the second one for independency of the United States as it actually strengthened the country on world political and economic arenas. The War of 1812 is an armed conflict between the United States (including some territories of modern Canada) and the United Kingdom of Great Britain and Ireland in the times of the Napoleonic Wars. The issue of the war... , except...
2 Pages(500 words)Essay
sponsored ads
Save Your Time for More Important Things
Let us write or edit the assignment on your topic "War 1812" with a personal 20% discount.
GRAB THE BEST PAPER

Let us find you another Assignment on topic War 1812 for FREE!