Comments (0)
Add to wishlistDelete from wishlist
Cite this document
Summary
In international politics, a sphere of influence is the claims by one state to predominantly, or exclusively have the control over a foreign territory. The Gulf of Guinea is an example of a sphere of influence that was between Germany and Great Britain.
A proxy war is a war…
Download full paperFile format: .doc, available for editing
HIDE THIS PAPERGRAB THE BEST PAPER93.5% of users find it useful 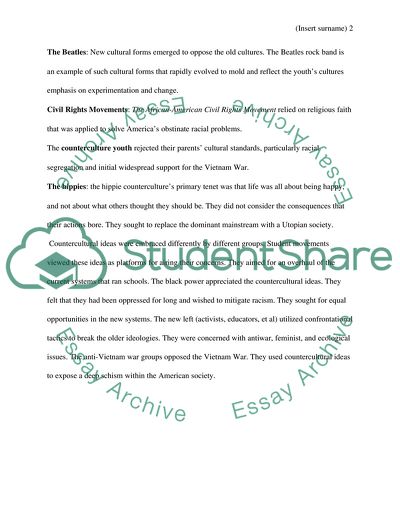 History and political science history Introduction In international politics, a sphere of influence is the claims by one state to predominantly, or exclusively have the control over a foreign territory. The Gulf of Guinea is an example of a sphere of influence that was between Germany and Great Britain.
A proxy war is a war instigated by a major power, which does not itself participate. In the 2nd world war, the US government funded mujahedeen rebels in Afghanistan as part of an American proxy war against the Soviet Union.
After the 2nd World War, Europe faced famine and economic crisis. The United States, through the Marshall Plan, proposed to rebuild the continent in the interest of a healthy world economy and political stability.
Discussion
Counterculture refers to a group whose beliefs are different from those of the common majority (Misiroglu, Gina p 24). The Free Speech Movement at the University of California: A socially fortunate group of students started identifying themselves as having different interests with regard to the requirements of practices and interests of the university’s corporate sponsors.
The Vietnam War: the younger generation viewed itself as a class that wished to create a diverse society.
The Beatles: New cultural forms emerged to oppose the old cultures. The Beatles rock band is an example of such cultural forms that rapidly evolved to mold and reflect the youth’s cultures emphasis on experimentation and change.
Civil Rights Movements: The African-American Civil Rights Movement relied on religious faith that was applied to solve America’s obstinate racial problems.
The counterculture youth rejected their parents’ cultural standards, particularly racial segregation and initial widespread support for the Vietnam War.
The hippies: the hippie counterculture’s primary tenet was that life was all about being happy, and not about what others thought they should be. They did not consider the consequences that their actions bore. They sought to replace the dominant mainstream with a Utopian society.
Countercultural ideas were embraced differently by different groups. Student movements viewed these ideas as platforms for airing their concerns. They aimed for an overhaul of the current systems that ran schools. The black power appreciated the countercultural ideas. They felt that they had been oppressed for long and wished to mitigate racism. They sought for equal opportunities in the new systems. The new left (activists, educators, et al) utilized confrontational tactics to break the older ideologies. They were concerned with antiwar, feminist, and ecological issues. The anti-Vietnam war groups opposed the Vietnam War. They used countercultural ideas to expose a deep schism within the American society.
Work Cited
Misiroglu, Gina. American countercultures an encyclopedia of nonconformists, alternative lifestyles, and radical ideas in U.S. history. Armonk, N.Y.: Sharpe Reference, 2009. Print. Read More
Share:
Tags
Cite this document
(“History Assignment Example | Topics and Well Written Essays - 250 words - 28”, n.d.)
History Assignment Example | Topics and Well Written Essays - 250 words - 28. Retrieved from https://studentshare.org/history/1635890-history

...Diplomacy was a foreign policy that was pursued by President William Howard Taft and Secretary of State Philander C. Knox in 1909-1913. Its goal was to create stability and order promoting American Commercial interests and using private capital to further U.S. interests abroad. It was successful in the Caribbean and Central America but failed in Mexico, the Dominican Republic, Nicaragua, and China. It grew out of President Theodore Roosevelt's peaceful intervention in the Dominican Republic by guaranteeing loans made to foreign countries. It is a form of colonizing the finances of struggling countries to ensure that the U.S. is protected from other Powers...
2 Pages(500 words)Essay
sponsored ads
Save Your Time for More Important Things
Let us write or edit the assignment on your topic "History" with a personal 20% discount.
GRAB THE BEST PAPER

Let us find you another Assignment on topic History for FREE!