Comments (0)
Add to wishlistDelete from wishlist
Cite this document
Summary
The four most important points made by Holliday are: the history of gold mining; its evolution, especially in terms of equipment; challenges and issues related to gold mining; and the future of the industry.
A lot of people do not really understand how gold mining begun in…
Download full paperFile format: .doc, available for editing
HIDE THIS PAPERGRAB THE BEST PAPER98.5% of users find it useful 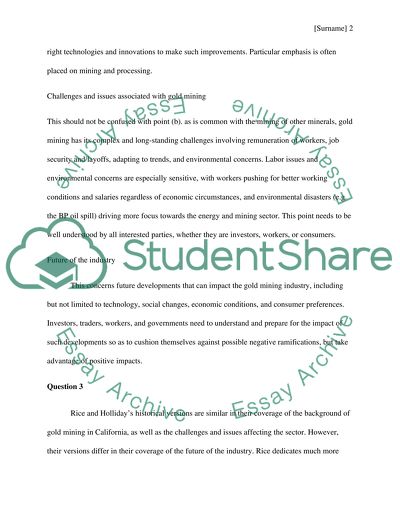 [Due History 4th Week Question The four most important points made by Holliday are: the history of gold mining; its evolution, especially in terms of equipment; challenges and issues related to gold mining; and the future of the industry.
Question 2
History of Gold Mining
A lot of people do not really understand how gold mining begun in California. Although some may think that the history is not important, that mindset is what prevents current stakeholders from coming up with appropriate solutions for the current challenges facing the industry. Understanding its history provides an aerial view of the whole sector, giving anyone who is interested in solving its problems now and in the future a good starting point.
Evolution of the industry
The industry has undergone numerous changes since its conception. From primitive equipment and technologies to the current state-of-the-art tools and technologies, understanding this transition enables any interested party to know the areas of improvement, and identify the right technologies and innovations to make such improvements. Particular emphasis is often placed on mining and processing.
Challenges and issues associated with gold mining
This should not be confused with point (b). as is common with the mining of other minerals, gold mining has its complex and long-standing challenges involving remuneration of workers, job security and layoffs, adapting to trends, and environmental concerns. Labor issues and environmental concerns are especially sensitive, with workers pushing for better working conditions and salaries regardless of economic circumstances, and environmental disasters (e.g. the BP oil spill) driving more focus towards the energy and mining sector. This point needs to be well understood by all interested parties, whether they are investors, workers, or consumers.
Future of the industry
This concerns future developments that can impact the gold mining industry, including but not limited to technology, social changes, economic conditions, and consumer preferences. Investors, traders, workers, and governments need to understand and prepare for the impact of such developments so as to cushion themselves against possible negative ramifications, but take advantage of positive impacts.
Question 3
Rice and Holliday’s historical versions are similar in their coverage of the background of gold mining in California, as well as the challenges and issues affecting the sector. However, their versions differ in their coverage of the future of the industry. Rice dedicates much more time to the history, evolution, and challenges, with a slight coverage of the future of the sector. Holliday, on the other hand, adopts a more detailed and comprehensive approach to the aspect, delving in a discussion of how technologies, social and economic conditions will affect the industry in the future, and what can be done to prepare for their impact.
Question 4
Holliday’s discussion of how European settlers and natives clashed over gold mining was very interesting and conspicuous for me. The natives’ willingness to defend the “erosion” of their lands, and prospectors’ determination to get gold were really intriguing. Also, the evolution of gold mining equipment inspired a deep appreciation of how far the industry has come, and how much more can be done through innovative and futuristic approaches. Finally, the role of the government in all this provided a very good read, and cultivated an understanding of the dynamics and machinations involved in the gold mining industry since its beginning.
Commentary
1.
Although men led the way in gold mining in California, various studies have been established that there were women involved and that they have not been given the recognition they deserve. The reason, so far, has been because of a lack of supporting evidence to corroborate the claim. However, new evidence shows that women played an active role in the gold mines of California.
2.
I acknowledge that Rice adopts a deeper and darker perspective, while Holliday’s approach is more positive. However, this is not consistent throughout their discussions. For example, as previously mentioned, Rice employed a laid-back approach in discussing the future of the industry (which is very important) compared to Holliday. This is worth noting. Generally, however, Rice’s view is deeper and darker. Read More
Share:
Tags
Cite this document
(“History 4th week Book Report/Review Example | Topics and Well Written Essays - 250 words”, n.d.)
History 4th week Book Report/Review Example | Topics and Well Written Essays - 250 words. Retrieved from https://studentshare.org/history/1633435-history-4th-week

Development of a new product

About Love: An Interpretation of Multi-Dimensional Views of the Topic of Love Using Chekhovs Short Story as a Vehicle of Analysis

...decision. New York on the other hand did not vote because delegates lacked authority to vote, however authority was granted a week later, and therefore on July 2 the declaration for independence was passed however congress debated on the draft changing it and deleting some of its passages. On July 4 congress finished the wording and approved the Declaration of Independence and which is now celebrated as the Independence Day. Meaning of Independence Day: Majority have the view that on 4th July the united states declared its impendence from British rule, there are various meanings attached to this day including a day which the united states declared independence and the day which the congress signed the...
5 Pages(1250 words)Essay

...Stephen Kinzer: OVERTHROW The is very renowned all round the world; he is an in the United s of America and a news paper reporter.He has been working with the New York Times for quite sometime now. He has covered the whole globe as far as reporting is concerned. He has left no place unreported in his reports, which are very interesting to read. “The 1980s saw him focus his attention upon the Central America. In 1990, he was promoted to bureau chief of the Berlin bureau and covered the growth of Eastern and Central Europe as they emerged from Soviet rule. He was also New York Times bureau chief in Istanbul (Turkey) from 1996 to 2000. He currently teaches journalism and United States foreign policy at Northwestern University. Kinzer...
2 Pages(500 words)Essay

...THE 4TH AMENDMENT s) s) number and The 4th Amendment A brief explanation of the 4th amendment is that it shields civilians and servicemen from unreasonable seizures and searches. It is explained that, an unreasonable search is a search undertaken by a government officer without a search warrant, a credible cause, or devoid of the authority to conduct it. Seizure, on the other hand, is obtaining possessions for evidentiary use in a court of law (Callahan, McCart and Mueller 2005). The gathering of my phone records and emails is a violation of the amendment, and it amounts to unreasonable search. Why is this so? Scaros (2011) describes the Katz case where such a violation did occur. In the...
1 Pages(250 words)Essay

History class across the United States

...Teacher My History In the same manner that interact different in also treat cheating differently in aclass. Depending on where they come from and their cultural orientation, some students tend to be very sociable and loose about cheating while others find it unacceptable. Gender also plays a role in one’s view about cheating and acceptable interaction. My History class This paper describes my personal observation of the behavior of students in my History class (put the location here). This paper will further illustrate how student’s behavior from different culture about cheating and interaction in class with recommendation on what strategy to adopt to make students more engaged...
4 Pages(1000 words)Admission/Application Essay
sponsored ads
Save Your Time for More Important Things
Let us write or edit the book report/review on your topic "History 4th week" with a personal 20% discount.
GRAB THE BEST PAPER

Let us find you another Book Report/Review on topic History 4th week for FREE!