Comments (0)
Add to wishlistDelete from wishlist
Cite this document
Summary
It’s when countries are so much involved with maintaining their political power as well as acquiring new powers and territories. Power here refers to the influence i.e. a…
Download full paperFile format: .doc, available for editing
HIDE THIS PAPERGRAB THE BEST PAPER92.2% of users find it useful 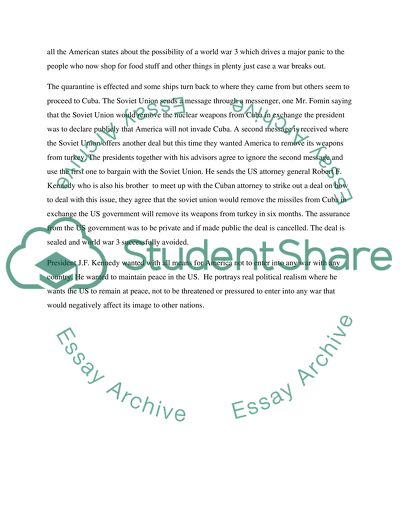 REALISM THEORY. Submitted by: 20th March Definition: Realism theory refers to the international relations between countries in terms of power. It’s when countries are so much involved with maintaining their political power as well as acquiring new powers and territories. Power here refers to the influence i.e. a state is able to influence others as well as resist influence from other states.
In the movie Thirteen days, President John F. Kennedy is faced with a missile threat from the Soviet Union which wants to place medium range ballistic missiles to Cuba. The nuclear weapons as one advisor puts it can wipe the whole of South East and North America killing at least 80 million Americans. He is facing world war 3 in the near future. They have to come up with a quick plan on how to stop the war heads from being operational.
President Kennedy does not want to invade Cuba, though the chiefs of staff really think that invading Cuba would be the best solution at the moment. He says the same course of events led to the break out World War 1. This time the risks were high because nuclear weapons were involved. They settle on blockade as the first measure which technically is an act of war that would help remove the missiles from Cuba as well as avoid war. They agree not to call it a blockade but quarantine. This is where the US navy ships will stop any ships that enter Cuban water for inspection to make sure they are not carrying any lethal weapons into Cuba.
Cuban ambassador to the US at first assures president Kennedy that there are weapons in Cuba but they are only for defensive but not offensive purposes, which the president sees as lies and sends US ambassador to the UN Mr. Aldai Stevenson to a council meeting where he roughs up the Cuban ambassador with questions to categorically state if whether there are nuclear weapons placed in Cuba by the Soviet Union or not. The ambassador avoids the questions and says that the American government was spreading malicious information to incite nations.
Throughout the entire process president Kennedy is pressurized by the chairman of Joint Chiefs of Staffs, General Maxwell Taylor to hasten an invasion before the whole chance of removing the missiles from Cuba become impossible. The president does not wish to subject innocent American citizens to an act world war 3. But all the same information starts spreading fast across all the American states about the possibility of a world war 3 which drives a major panic to the people who now shop for food stuff and other things in plenty just case a war breaks out.
The quarantine is effected and some ships turn back to where they came from but others seem to proceed to Cuba. The Soviet Union sends a message through a messenger, one Mr. Fomin saying that the Soviet Union would remove the nuclear weapons from Cuba in exchange the president was to declare publicly that America will not invade Cuba. A second message is received where the Soviet Union offers another deal but this time they wanted America to remove its weapons from turkey. The presidents together with his advisors agree to ignore the second message and use the first one to bargain with the Soviet Union. He sends the US attorney general Robert F. Kennedy who is also his brother to meet up with the Cuban attorney to strike out a deal on how to deal with this issue, they agree that the soviet union would remove the missiles from Cuba in exchange the US government will remove its weapons from turkey in six months. The assurance from the US government was to be private and if made public the deal is cancelled. The deal is sealed and world war 3 successfully avoided.
President J.F. Kennedy wanted with all means for America not to enter into any war with any country. He wanted to maintain peace in the US. He portrays real political realism where he wants the US to remain at peace, not to be threatened or pressured to enter into any war that would negatively affect its image to other nations.
Citations
Keith L. Shimko (2007) International Relations . Boston. Wadsworth
Political realism versus political idealism. An introduction to political realism. Retrieved from, http://www.faculty.valenciacollege.edu/scrosby/realismidealism.htm
Pearson education (1995) International Relations. Chapter summary. http://wps.pearsonlongman.com/long_goldstein_ir_10_cw/193/49498/12671523.cw/index.html Read More
Share:
Tags
Cite this document
(“Thirteen Days Research Paper Example | Topics and Well Written Essays - 250 words”, n.d.)
Retrieved from https://studentshare.org/history/1618096-thirteen-days

CHECK THESE SAMPLES OF Thirteen Days

...Summary of Thirteen Days by Robert Kennedy ‘Thirteen days’ is a book that was written by Robert F. Kennedy on subsequentevents that happened during the Cuban missile crisis of 1962. He wrote the book just before his death in 1968 and therefore was unable to make necessary revisions and additions to the book but still the book was highly acclaimed and given the way and became historical. Kennedy gives a detailed account and recollection of the unfolding events that took place during that crisis. He provides an in-depth account of how conversations were taking place at the white house and how the president felt the load on his neck given the magnitude of the crisis to the...
3 Pages(750 words)Essay

...? Analysis of Works and Days Introduction The Theogony of Hesiod is a story that illustrates the interconnection between the existence of the gods and humanity. The power of the gods to change the ability of humans is illustrated in the story of Hesiod. The meeting with the gods occurs on the foot of Mount Hellion in Boetia when Hesiod was a shepherd (Hesiod, 2004, p. 218). The meeting with the gods led to the favor of Hesiod. These goddesses impart their knowledge and talent. Hesiod is about the birth of the gods symbolized by the title of the poem. In the poem the gods are synonymous with the universe (cosmos). The poem illustrates the disorderly behavior of the gods. It is the grace of the Muses that enables the choir to sing... and the...
3 Pages(750 words)Assignment

...THIRTEEN DAYS In the film Thirteen Days, the story revolves around the threat of nuclear war because of USSR's military build up in Cuba. The White House and the Pentagon was alarmed by the action of Soviet government prompting them to demand pull out of the nuclear weapons by the USSR in Cuba. Instead of heeding the US call for nuclear pull out, Soviet Union increased military activity creating more tensions on the American side. The US President John F. Kennedy because of this reason, left with three options: one is to call for international pressures against aggressive Soviet military build up; Second, to have nuclear exchange; and third, air strike. The pressures...
4 Pages(1000 words)Movie Review

...Review of Burmese Days by George Orwell Boundaries are important to every person on the planet whether it is physical or implied boundaries. In Orwells Burmese Days, there are many boundaries but the most important one seems to be racism. This novel shows the difficulty that prejudice, racism and misunderstanding can have to a larger population. The challenge for this novel is that it is about racism but it also shows what happens to someone when they are immersed in a situation where at first they are an underdog and then they are accepted. In these types of situations it seems that an individual can change their convictions about themselves in order to be accepted by a group. Some people would call...
5 Pages(1250 words)Book Report/Review

...Thirteen Days The book Thirteen Days: A Memoir of the Cuban Missile Crisis is written by Robert Kennedy. As is clear from the title itself, the book describes the Cuban missile crisis that took place in the year 1962. It gives the account of the meetings by the Executive Committee, a team handpicked by the US President Kennedy. The ExComm’s job was to use their skills to work out the delicate situation between the United States of America and the USSR after they discovered Soviet nuclear missiles in Cuba. They had to solve the problem in a manner which would not spark of another world war. The author writes about the way the President handled the situation quite...
2 Pages(500 words)Book Report/Review

...21 Days October 24th, Today I did not feel any happiness. I found out that there were assignments I was yet to do that I knew nothing about. In addition, the lecturer chose me to give a presentation tomorrow, despite not giving me time to prepare. I also met my academic mentor today about my falling behind in class work. October 25th, 2013 I did my presentation today, and it went well. Although it was successful, I am still glad that I am done with it. However, one of my assignments was late, and the lecturer deducted 15% from my total points. In spite of my attempts to explain having to deal with my sister’s wedding, the lecturer was deaf to me. What to do? October 26th, 2013 Today started well after two of my...
4 Pages(1000 words)Essay

...Thirteen: A Film Analysis Thirteen: A Film Analysis The film is a coming of age exploration of a girl’s life and the struggles related to the different influences and issues around her. Specifically, the main character Tracey Freeland had been faced with the factors that influence a teenager such as the discovery of drugs, sex and other forms of illegal activities.1 This is a representation of the problems of a teenager in the worst kind. The film then can be considered as a way of presenting the scenarios related to the stage wherein a human being is introduced to the complicated way of living, the start of being independent which is a bridge to the life as an adult. The film is a presentation of the...
5 Pages(1250 words)Movie Review

... America’s Happy 50s It is undeniable that 1950’s were arguably happy moments for America. The 50s marked an end to a prolonged war and unrest. Whereas the World War II period was marked by instability, political unrest, economic crisis and familial issues, the 50s brought in a new dispensation of relaxed mood, economic growth, technological advancement, and general peace of mind. Indeed, the Americans began to enjoy better living conditions, better wages, and became the first beneficiaries of new technologies. The 50s benefited many Americans, encouraged family, and societal bonding. Additionally, the improved economic conditions catapulted many Americans from low class to medium income earners. Most families could afford a car... America’s...
1 Pages(250 words)Assignment

...Chapter Thirteen Reading Response My reading of chapter thirteen enlightened me on how art can be used to create emotional experiences in an abstract setting. The entire chapter was interesting; however, two things stood out. Firstly, I got to learn that art can be used in abstraction. Secondly, I got to understand that art can be used in realism as well. The two works of art I responded to most positively were AIDS Memorial Quilt in San Francisco and Le Corbusier’s ‘Notre-Dame-Du-Haut’. Both pieces of art are emotionally driven and capture emotions of the audience. For instance, the AIDS Memorial Quilt depicts a solemn commemoration of AIDS victims; a celebration of their lives. Notre-Dame-Du-Haut is...
1 Pages(250 words)Assignment
sponsored ads
Save Your Time for More Important Things
Let us write or edit the research paper on your topic "Thirteen Days" with a personal 20% discount.
GRAB THE BEST PAPER

Let us find you another Research Paper on topic Thirteen Days for FREE!