Comments (0)
Add to wishlistDelete from wishlist
Cite this document
Summary
A leader among the Serbian Narodna Odbrana nationalist insurgent group, Jevtic (1914), stated that “as every one knows, the old Austrio-Hungarian Empire was built by conquest and intrigues, by sales and treacheries”. Since the Archduke Franz Ferdinand is an heir to the…
Download full paperFile format: .doc, available for editing
HIDE THIS PAPERGRAB THE BEST PAPER99% of users find it useful 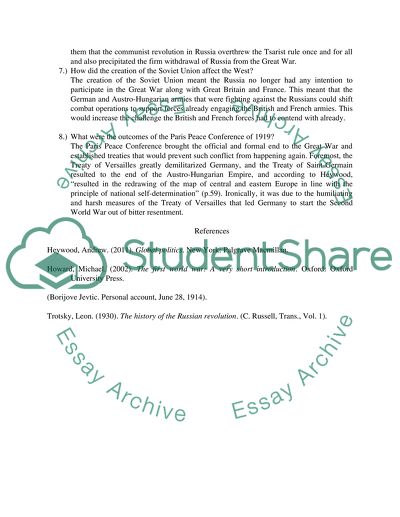 Reflection Questions Why was Archduke Franz Ferdinand assassinated? A leader among the Serbian Narodna Odbrana nationalist insurgent group, Jevtic (1914), stated that “as every one knows, the old Austrio-Hungarian Empire was built by conquest and intrigues, by sales and treacheries”. Since the Archduke Franz Ferdinand is an heir to the Austrian royalty, it would further the Serbian nationalist cause if he would be assassinated during his visit at Sarajevo during the Austrian military exercises there.
2.) How did the new technologies set the Great War apart from previous conflicts?
The new technologies during the Great War introduced the beginnings of modern warfare as steel warships, aircrafts, machine guns, tanks, armored cars, and gas weapons were utilized by the armies at war. These weapons were devastating to soldiers as death tolls during the Great War’s massive battles resulted to horrific loss of life due to these new weapons. Civilian populations were mobilized to many industrial factories as these weapons were needed to be manufactured at both high rate and volume.
3.) How did Russia’s involvement in the Great War lead to the Russian Revolution?
While Russia’s initial involvement in the Great War was seen in a positive light, most Russian soldiers were conscripts who were not close to willing to join in. Coupled by the lack of effective logistics, poor leadership of Russia’s many officers, and the eventual staggering casualties and desertions; it would be no surprise that such news would increase the discontent in the already disillusioned Russian population to the point of revolt. As Trotsky (1930) observed, “the revolutionary elements, scattered at first, were drowned in the army almost without a trace, but with the growth of the general discontent they rose to the surface” (p.15).
4.) How did Russia’s withdrawal change the course of the Great War?
The withdrawal of Russia would lead to military and political changes in Europe afterwards. Howard (2002) posited that “by then the Russians might well be out of the war and the Germans able to concentrate all their forces on breaking the Western allies”, this would add military pressure to the Western Front which France and Great Britain were engaged in. Politically, Russia’s humiliating withdrawal would lead to the downfall of the Tsarist regime and pave way for the rise of the Communist Soviet Russia.
5.) Why did the provisional government of Russia insist on remaining in the Great War?
The Russian Provisional Government under the Kerensky administration insisted on remaining in the Great War in was to adhere to its obligations with Russia’s wartime allies to continue the fight against the German and Austro-Hungarian Empires. This did not make the soldiers feel any better since such an objective showed less concern for the country’s welfare and situation.
6.) What was the significance of Lenin and Trotsky?
Vladimir “Lenin” Ulyanov and Lev Bronshtein, more famously known as Leon Trotsky, were the main leading figures of the Russian Communist Revolution. It was because of them that the communist revolution in Russia overthrew the Tsarist rule once and for all and also precipitated the firm withdrawal of Russia from the Great War.
7.) How did the creation of the Soviet Union affect the West?
The creation of the Soviet Union meant the Russia no longer had any intention to participate in the Great War along with Great Britain and France. This meant that the German and Austro-Hungarian armies that were fighting against the Russians could shift combat operations to support forces already engaging the British and French armies. This would increase the challenge the British and French forces had to contend with already.
8.) What were the outcomes of the Paris Peace Conference of 1919?
The Paris Peace Conference brought the official and formal end to the Great War and established treaties that would prevent such conflict from happening again. Foremost, the Treaty of Versailles greatly demilitarized Germany, and the Treaty of Saint-Germain resulted to the end of the Austro-Hungarian Empire, and according to Heywood, “resulted in the redrawing of the map of central and eastern Europe in line with the principle of national self-determination” (p.59). Ironically, it was due to the humiliating and harsh measures of the Treaty of Versailles that led Germany to start the Second World War out of bitter resentment.
References
Heywood, Andrew. (2011). Global politics. New York: Palgrave Macmillan.
Howard, Michael. (2002). The first world war: A very short introduction. Oxford: Oxford University Press.
(Borijove Jevtic. Personal account, June 28, 1914).
Trotsky, Leon. (1930). The history of the Russian revolution. (C. Russell, Trans., Vol. 1). Read More
Share:
Tags
Cite this document
(“Reflection Questions Assignment Example | Topics and Well Written Essays - 250 words”, n.d.)
Reflection Questions Assignment Example | Topics and Well Written Essays - 250 words. Retrieved from https://studentshare.org/history/1607121-reflection-questions

CHECK THESE SAMPLES OF Reflection Questions

...?Reflection Introduction This assignment aims to reflect on an achievement from the Module 9 outcome, which specifically is on: demonstrating effective communication skills in the delivery of seamless care: making referrals to members of the multi-professional team. This reflection aims to evaluate the importance of learning through experience. It is a reflection of an incident which required a referral to the occupational therapist to secure patient safety in the home and to improve the patient’s quality of life. This essay shall discuss an overview of the reflection and its overall impact on the nursing practice. This paper is based on an actual...
13 Pages(3250 words)Essay

...Section/# Reflection One of the unique aspects of popular culture is the fact that it encompasses so many different aspects life. For instance, music, movies, fashion, politics, video games, YouTube videos, certain word combinations, jokes, news items, and a litany of other factors all contribute to what defines popular culture at any given moment. As a function of this understanding, this brief paper will seek to utilize the example of the recent war in Libya as portrayed in the news media of the United States as a personal reflection piece concentric upon popular culture and the interpretation thereof. Although a groundswell of popular anti-war sentiment had gripped the nation during the recent war...
3 Pages(750 words)Essay

...Reflection Questions The word apology is derived from the Greek word apologia which meant a defense or defense speech. Socrates was taken to court and accused of impiety. The jury had most of the power in the courtroom. It is quite ironical that Socrates was put to death because of the free speech that he practiced and still he could talk freely during his trial. Socrates was accused of corrupting the youths. Socrates also refused to recognize the gods that the state recognized and introduced other divinities. Socrates was to be sentenced to death as a penalty. However, in his apology Socrates told the jurors that his execution will harm them more than it will harm him. Socrates does not seem to be...
4 Pages(1000 words)Essay

...Philosophy: A Reflection Question Time is an important part of our daily life. Regardless of what activity a person is involved in, the factor of time is always present. This is an immaterial, yet omnipresent aspect in life. Different people have varying perceptions about time, and experience time in different ways, because of the differences in the emotional state and make up of different people. For this reason, I believe time is a complex variable, of which it might be impossible to understand it as a whole. From infancy to adulthood, people experience time differently. Since I have learnt that people experience time differently, I will change my attitude toward certain behaviour in people, which is...
2 Pages(500 words)Essay

...3 Reflection Questions How does Ms. Wessling use s as a reflection strategy? Ms. Wessling used s as a reflection strategy by discovering what she saw as she writes. She put a video recorder to be reminded of what she had done for a particular day. She will go over the video, self-reflect, and write notes about what she had learned for the day, what was the interesting part of her lesson, and what was the areas for improvement in the next lessons to come. For Ms. Wessling, using notes permits the teachers to have personal reflection of their teaching strategies, methodologies, and classroom managements. Notes, in some way, allows teachers...
1 Pages(250 words)Assignment

...Reading reflection and questions October 30, Reading reflection and questions Reading Reflection The idea that establishing rules and procedures for preventing indiscipline is significant to class management was interesting to me (Borich, 2013). This is because the idea establishes the teacher’s role as a manager. A manager controls people, and management of class activities involves such control. The term management is therefore not accidental but refers to one of the function of a teacher in ensuring that students operate within established regulations. Such a role is contrary to the imagination that managers only exist in large or commercial...
1 Pages(250 words)Assignment
sponsored ads
Save Your Time for More Important Things
Let us write or edit the assignment on your topic "Reflection Questions" with a personal 20% discount.
GRAB THE BEST PAPER

Let us find you another Assignment on topic Reflection Questions for FREE!