Comments (0)
Add to wishlistDelete from wishlist
Cite this document
Summary
People have been warned that this planet’s resources are not limitless and, as hard as it is for people to believe neither is the stability of the planet itself. Humanities domination…
Download full paperFile format: .doc, available for editing
HIDE THIS PAPERGRAB THE BEST PAPER93.5% of users find it useful 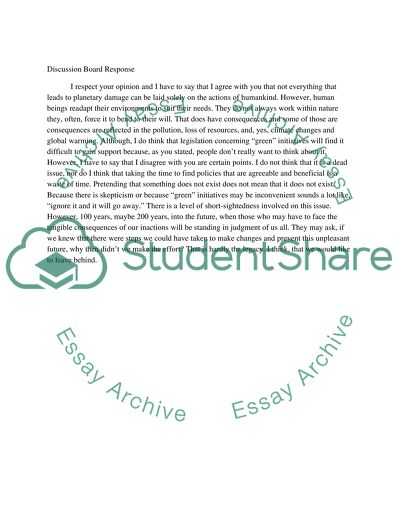 Discussion Board Post Global warming and climate changes and the results of it have been discussed for some time. People have been warned that this planet’s resources are not limitless and, as hard as it is for people to believe neither is the stability of the planet itself. Humanities domination of the planet, the means by which we force our environments to meet our needs and desires, does have consequences. One of those consequences is the climate changes occurring around us. Although not all can be blamed solely on humanity, certain changes may simply be the natural changes that occur naturally. Initiatives to better preserve this planet, adopting a “greener” perspective, and taking steps to research and beneficially slow the damage we contribute to the planet is a good thing.
There are several things that tend to stand in the way of solid government policies and interventions on this issue. Firstly, many people do not take the concern seriously. They often disregard the topic’s discussions to the ramblings of paranoid conservationists and “tree huggers.” Others disregard the concerns, founded or not, because the potential, consequential, repercussions of environmental issues will, likely, not culminate into anything serious enough to affect day to day living for generations to come; which, overall, could be considered rather selfish and definitely short-sighted. Politically, it is harder to get full support on initiatives because different states have a differing level of economic loss and gain when it comes to environmental policies. Both, Democrats and Republicans, representing states that have heavier fossil fuel productions dispute any legislature and are far less likely to support environmental interventions.("New York Times") Several states have taken upon themselves to implement their own policies and initiatives to encourage a more environmentally conscious and beneficial approaches.
Environmental issues are very real, they do matter, and they are worthy of taking seriously in order to preserve this planet that we all live on. In the end, however, it is not an issue simply of states, or individual countries, it is a global issue. But America’s policies, often, set an example for others around the world, perhaps greater action on our part would result in greater responses worldwide.
References
"Climate and Energy Legislation." New York Times 10 Dec. 2010, n. pag. Web. 23 Jul. 2012.
http://topics.nytimes.com/top/news/business/energy-environment/climate-and-energy-legislation/index.html
Discussion Board Response
I respect your opinion and I have to say that I agree with you that not everything that leads to planetary damage can be laid solely on the actions of humankind. However, human beings readapt their environments to suit their needs. They do not always work within nature they, often, force it to bend to their will. That does have consequences and some of those are consequences are reflected in the pollution, loss of resources, and, yes, climate changes and global warming. Although, I do think that legislation concerning “green” initiatives will find it difficult to gain support because, as you stated, people don’t really want to think about it. However, I have to say that I disagree with you are certain points. I do not think that it is a dead issue, nor do I think that taking the time to find policies that are agreeable and beneficial is a waste of time. Pretending that something does not exist does not mean that it does not exist. Because there is skepticism or because “green” initiatives may be inconvenient sounds a lot like, “ignore it and it will go away.” There is a level of short-sightedness involved on this issue. However, 100 years, maybe 200 years, into the future, when those who may have to face the tangible consequences of our inactions will be standing in judgment of us all. They may ask, if we knew that there were steps we could have taken to make changes and prevent this unpleasant future, why then didn’t we make the effort? That is hardly the legacy, I think, that we would like to leave behind. Read More
Share:
Tags
Cite this document
(“Environment policy Assignment Example | Topics and Well Written Essays - 500 words”, n.d.)
Retrieved from https://studentshare.org/history/1600685-environment-policy

...?Economic Policy and Global Environment Introduction Fiscal policy measures are the methods which are applied by the government to adjust the levels of government spending and tax rates that directly influence the growth of an economy. The fiscal policy is used in combination with the monetary policy to control the economic growth (Horton and El-Ganainy, 2012). The monetary and fiscal policies can directly affect the rate of inflation and determine whether the country will face conditions of growth or recession (Kopits and Symansky, 1998). There are various types of rules which must be considered while following the fiscal policy like, Balance Budget Deficit Rules, Borrowing Rules and Debt or Reserve rules. One of the major rules... job cuts...
6 Pages(1500 words)Essay

...Significance of EU Environment policy in terms of impact to its global equivalent Introduction Policymakers in Europe and around the world are realizing the importance of healthy environments for public health. Certain member states of the European Union (EU) have already achieved successes in improving indoor environmental quality, such as controlling certain contaminants (e.g., environmental tobacco smoke) or developing nationwide policies that address air generally. However, a common European approach to achieving healthy indoor environments is desirable for several reasons including providing a broader recognition of the problem of unhealthy indoor...
16 Pages(4000 words)Essay

The Gaia Hypothesis: New Age Myth, or the Future of Environment Policy

...The Gaia Hypothesis: New Age Myth, or the Future of Environment Policy The term 'Gaia,' which is Greek for 'Earth Mother,' often conjures up images related to New Age spirituality or pseudo-scientific thinking. The Gaia hypothesis, however, may be seen as a concept that is teleological in essence and that seeks to explain certain fundamental realities about the nature of the planet's ecosystem. This paper argues that Gaia is not merely a hypothesis that exists at the periphery of scientific thought, but rather a revolutionizing concept that has affected environmental policies and sociological contexts as well. The Gaia hypothesis was proposed by James Lovelock and Lynn Margulis in 1972....
6 Pages(1500 words)Essay

...Business Environment and Public Policy Table of Contents Introduction Industrial growth has been synonymous with the growth of the country and thecivilization of men associated with it. Since the Industrial Revolution and the onset of fossil fuel use, human life has been associated with excessive pollution occurring various forms. Fossil fuels have resulted in large quantities of Carbon monoxide and Carbon dioxide emissions, that are directly harmful for the health of human beings themselves as well as all animals and living organisms associated in the near vicinity of such large emission sources. Apart from these emissions, man's industries also went ahead towards emission of various other gases that...
10 Pages(2500 words)Essay

Guidelines for the Diagnosis and Treatment of Chronic Heart Failure

...International Environment Policy International Environment Policy Economic globalization leads to positive and negative effects in the developing countries. Some of the factors include: (I) increase in standard of living where economic globalization enable the developing nations to access foreign lending. Where countries use the money selectively there will be inequality since not all citizens will participate in the benefits. (II) Access to new markets where globalization can lead to free trade between countries. Access to new markets help companies in innovation. (III) Widening disparity in incomes where globalization will reduce unemployment while increasing a wage gap...
1 Pages(250 words)Assignment

...A Pigovian tax of the al Affiliation A Pigovian tax Economic production can result in negative externalities. These benefits accrued by the investor’s results into negative impacts to the environment and the society as well. For instance, pollution arising from production affects the environment in a significant way. This has been the case especially in the developed countries whereby a trail of environment externality is left to the outside world. An example in point has been Katrina hurricane that resulted from pollution from these processing industries. The damages were much of the result of environmental pollution. To curb, environmental externalities, many laws have been enacted to...
1 Pages(250 words)Assignment
sponsored ads
Save Your Time for More Important Things
Let us write or edit the assignment on your topic "Environment policy" with a personal 20% discount.
GRAB THE BEST PAPER

Let us find you another Assignment on topic Environment policy for FREE!