Comments (0)
Add to wishlistDelete from wishlist
Cite this document
Summary
The turn of the century tended to be full of promise to numerous people. Several people viewed commerce and industry as future waves as agriculture also boomed in the…
Download full paperFile format: .doc, available for editing
HIDE THIS PAPERGRAB THE BEST PAPER97.6% of users find it useful 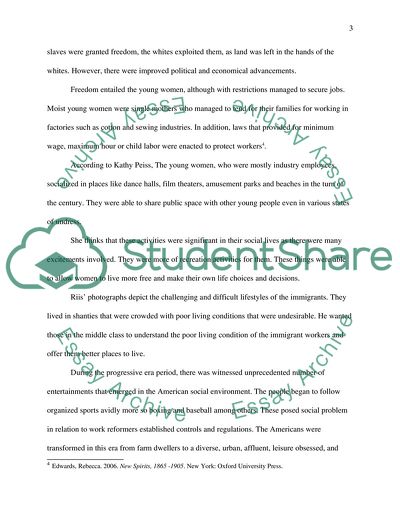 Reaction Journal to American Civil War Introduction It is during the turn of the century period that there were many changes witnessed in the American’s lives. The turn of the century tended to be full of promise to numerous people. Several people viewed commerce and industry as future waves as agriculture also boomed in the US. There were witnessed sexual revolution, women’s liberation movements, as well as the enhancement of large corporations, and extensive labor, which immensely transformed people’s lives. People had freedoms to participate in agriculture and employed technology and heavy irrigation methods and fertilization in regions such as California, which were essential in factory farms1. People also enjoyed the freedom to buy new products, stored in better stores as well as new modes of transportation that tended to change life hastily. However, the class definition also persisted, as it was a rigid one there were the wealthiest and poorest in society. These definitions created a foundation for progressivism2. Education was provided to both male and female in the same schools while the young generations dated openly in public as they interacted in amusement parks such as Coney Island.
Evidently the changes from the reconstruction era were minimal, although there were witnessed alterations in the American race relations; the equal rights among the races were not fully resolved3. The wealth distribution was another issue that did not change as although the slaves were granted freedom, the whites exploited them, as land was left in the hands of the whites. However, there were improved political and economical advancements.
Freedom entailed the young women, although with restrictions managed to secure jobs. Moist young women were single mothers who managed to tend for their families for working in factories such as cotton and sewing industries. In addition, laws that provided for minimum wage, maximum hour or child labor were enacted to protect workers4.
According to Kathy Peiss, The young women, who were mostly industry employees, socialized in places like dance halls, film theaters, amusement parks and beaches in the turn of the century. They were able to share public space with other young people even in various states of undress.
She thinks that these activities were significant in their social lives as there were many excitements involved. They were more of recreation activities for them. These things were able to allow women to live more free and make their own life choices and decisions.
Riis’ photographs depict the challenging and difficult lifestyles of the immigrants. They lived in shanties that were crowded with poor living conditions that were undesirable. He wanted those in the middle class to understand the poor living condition of the immigrant workers and offer them better places to live.
During the progressive era period, there was witnessed unprecedented number of entertainments that emerged in the American social environment. The people began to follow organized sports avidly more so boxing and baseball among others. These posed social problem in relation to work reformers established controls and regulations. The Americans were transformed in this era from farm dwellers to a diverse, urban, affluent, leisure obsessed, and teeming multitude. The reformers of this period, embarked in enacting regulations, to control social life.
According to Florence Kelly,5 the rapid industrialization has negative effects on the working urban class concerning their families, health, and education of the working people as well as the economic morality concerning the control of production means. She suggests changing this, through probable legislation to mitigate the difficulties that were at end passed as federal laws. This is because she wants the modern industrialization in America, which is expanding rapidly to contribute constructively to the nation. Furthermore, the speeches of Theodore Roosevelt6 and William Jennings Bryan, promoted labor liberalism and money regulation in a period when inflation was escalating and heavily affecting the economy.
List of references
Anderson, L. William. 2006. The Progressive Era, Part 2: Progressives and the Economy.
Freedom daily. Accessed at,
< http://www.fff.org/freedom/fd0603d.asp> Barton, Rebekah. 2009. Progressive Era Leisure and Capitalism: Freedom, License,
Reform. Pp 1-25.
< http://www.slcc.edu/history/rebekah.pdf > Edwards, Rebecca. 2006. New Spirits, 1865 -1905. New York: Oxford University
Press.
Kelley, Florence. 2011. Modern industry in relation to the family, health, education, morality.
New York: Longmans, Green, and Co.
McGerr, Michael E. 2003. A fierce discontent: the rise and fall of the Progressive movement in
America, 1870-1920. New York: Oxford University Press.
Tomlins, Christopher L. 2010. Freedom bound law, labor, and civic identity in colonizing
English America, 1580-1865. New York: Cambridge University Press. http://site.ebrary.com/id/10412873. Read More
Share:
Tags
Cite this document
(“Reaction Journal to American Civil War Book Report/Review”, n.d.)
Reaction Journal to American Civil War Book Report/Review. Retrieved from https://studentshare.org/history/1599525-reaction-journal-to-american-civil-war

CHECK THESE SAMPLES OF Reaction Journal to American Civil War

...degree, the “pursuit of happiness? Where in slavery can a slave be found to have “liberty”? Signs of the coming Civil War in the United States were clearly seen decades before the Battle at Fort Sumter began on April 12, 1861. According to the Library of Congress Civil War Desk Reference, page 53, “Long before the Civil War, the terms “North” and “South” had acquired fixed geographic and cultural certainty for Americans. In 1767, two English astronomers, Charles Mason and Jeremiah Dixon, completed a survey that marked what had been a disputed boundary between Pennsylvania and Maryland. By the early nineteenth century,...
8 Pages(2000 words)Essay

...Events Which Led To the American Civil War Introduction The American Civil War which occurred between the years 1861 and 1865 is also referred to as The War Between the States due to the characteristics that it had. The main events which are used as historical explanation to the civil war are laid complex in the problems that rose from slavery, sectionalism, parties and politics that surrounded the antebellum era. It is presumed that issues that were brought about by sectionalism were the main propelling factors that drove the United States into the civil...
8 Pages(2000 words)Essay

...? American Civil War Task The Mexican-American War was between American s and Mexico, where America wanted to annex Texasand some other Mexican states. The war ended after the Treaty of Guadalupe Hidalgo, which required America to pay some money to Mexico. When America won the war, there was a debate between Northern states who were capitalists and the Southern states which supported and practised slavery. The debate was to determine whether the new states acquired from the treaty would be recognized as free states. The southerners wanted to crop their land into the newly acquired states so that they...
6 Pages(1500 words)Assignment

...?Full s Teacher’s s American Civil War The South Abraham Lincoln was the president of the Unites s of America in the period when the Civil War took place; between 1860 and 1865. The American public was subject to several forces of division and rebellion that caused tension to a unified country. The United States was composed of states willing to overcome the rebellious calls by the group of nations referred to as the Confederacy. Secession was the theme of the Civil War where the Confederacy that constituted 11 nations, wanted to bring down the Union through their withdrawal. Certain reasons fueling the rebellion charges by the confederate stood out in the Civil War. Among the most conspicuous charges chanted by the rebellion... was the...
5 Pages(1250 words)Essay

... American civil War Introduction The American civil War was fought between 1861 and 1865 and had both economics and politics as the leading causes. A common notion was that the North was no longer willing to continue with slavery as an essential part of American society. The Northern economy was mainly based on factories and wages while the South economy had large cotton plantations. The south needed slaves to work in the cotton plantations and requested for new territories to be admitted in the Union as slave states in order to prevent the slaves from joining the free territories (Arnold and Wiener 17). On the other part, North states were against slavery. The South wanted the new states to be slavery states, but the North wanted... troops...
3 Pages(750 words)Term Paper

...?Кука number Publish Essay One The period between the American Civil War and the First World War marked American consolidation and expansion in the North American, Latin American and Asian domains. The American socio economic arrangements in this period evolved rapidly to assume differing dimensions. The disappearance of the enslaved American South led to social consolidation as well as territorial gains for the North. In addition, displacement of American Indian settlements from the mid West led to further settlements into the American hinterland. Both...
7 Pages(1750 words)Essay

...Compare and contrast of the values embodied by Grant and Lee The War, and the Men Who Led It The American Civil War - the historical war between theUnited States (called the Union) and eleven Southern states (called the Confederate States of America, or Confederacy) brought to fore two men - two generals in the armies on the either side, who were as different as the causes they supported. While the Confederacy led by General Robert E. Lee embraced the principles of right to succession and slavery in the American society; the Union, led by General Ulysses S. Grant, opposed the expansion of slavery and wrote down any kind of right to...
3 Pages(750 words)Essay

...Reaction Journal The Great Migration and Great Transformations. The ‘Great Migration’ was fuelled by Jim Crow in the South: low wages, abysmal working conditions, lack of education and rigid segregation. Unofficial racism persisted in the North too. “There were – two Americas.” 1 Most African Americans enlisted to prove their patriotism, hoping to ensure racial equality in post-war America. W.E.B. DuBois’ Returning Soldiers and Close Ranks2 echo this hope. Tragically, racial discrimination remained a part of American society for several more decades, and did not end with World War 1. 1919. World War 1 led to paranoia, censorship of books, movies and art, and suppressed freedom of speech and dissent. The arrest of Eugene V. Debs... is...
5 Pages(1250 words)Essay

...The American Civil War The American civil war occurred in 1861-1865 due to slavery. The war was aimed at governing the unification and independence of the Confederacy or the south. Seven undiplomatic Southern states claimed their withdrawal from the United States and thus formed Confederacy States of America. In return, the northern states and the southern states split. This paper analyzes the causes and events leading to the American Civil War. One of the causes of American civil war was the economic and social...
1 Pages(250 words)Essay

...﻿ Abraham Lincoln and the Civil War Introduction The American civil war is a critical landmark in the history of America. The civil war marked an era of conflicts especially between the southern and the northern states. Various historians have postulated different causes of the war and the role played by the civil war leaders. The civil war resolved two issues that the American Revolution failed to solve. Firstly, it addressed the issue of division and recession of other States. Secondly, it settled the issue of slavery...
4 Pages(1000 words)Essay
sponsored ads
Save Your Time for More Important Things
Let us write or edit the book report/review on your topic "Reaction Journal to American Civil War" with a personal 20% discount.
GRAB THE BEST PAPER

Let us find you another Book Report/Review on topic Reaction Journal to American Civil War for FREE!