Comments (0)
Add to wishlistDelete from wishlist
Cite this document
Summary
Any legislative or statutory arrangement like ACTA or PIPA that tends to curb the unbiased flow of goods and services and a free flow of knowledge and information needs to…
Download full paperFile format: .doc, available for editing
HIDE THIS PAPERGRAB THE BEST PAPER96% of users find it useful 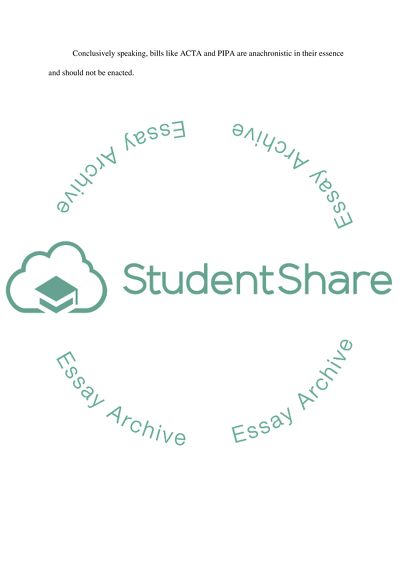 of the of the Concerned History and Political Science 15 May Bills Like ACTA (Anti-Counterfeit Trade Act) and PIPA (Protect IP Act) should not be Enacted
In the current times with the onset of IT revolution, the world has become one global village (Halal 11). Any legislative or statutory arrangement like ACTA or PIPA that tends to curb the unbiased flow of goods and services and a free flow of knowledge and information needs to be curbed and stopped from being enacted (Mehra 12).
Though ACTA discernibly intends to protect the intellectual property rights, in spirit it happens to be preferential and curbs the human rights and the right to free expression of the free citizens (Dames 26). ACTA will encourage and abet a culture of surveillance that will infringe upon the privacy of common people (The Daily Mail 47). ACTA is bound to give way to legal measures and standards that will be totally contrary to the ideals of a democratic exchange of ideas, free markets and the respect for civil liberties (Manila Bulletin 27).
The same stands to be true for the PIPA. Professedly the PIPA intends to extend teeth to the US government and various copy right holders to tame the websites dealing in counterfeit goods (Ponder 3). However, in its practical ramifications, PIPA could well be expected to curb entrepreneurial ingenuity and the freedom of speech (Gattuso B03). This bill is also bad in the sense that it restraints the consumer right to avail the best products and services at the most affordable prices (Sotonoff 11).
Conclusively speaking, bills like ACTA and PIPA are anachronistic in their essence and should not be enacted.
Works Cited
“Curbing the Internet is an Assault on our Freedom”. The Daily Mail 30 January 2012:
47. Print.
Dames, K Matthew. “Occupy Copyright”. Information Today January 2012.:26. Print.
“Draft Trade Agreement Worries Technology Firms”. Manila Bulletin 24 April 2010 :
27. Print.
Gattuso, James. “Mutiny over Online Piracy”. The Washington Times 19 January 2012:
B03. Print.
Halal, William E. “The Information Technology Revolution”. The Futurist 26. 4 (1992).
10-11. Print.
Mehra, Achal. Free Flow of Information. New York: Greenwood Press, 1986. Print.
Ponder, Hal. “Anti-Piracy Legislation Closer to Passage”. International Musician 110. 1
(2012): 3. Print.
Sotonoff, Jamie. “Suburban Bloggers Worry about Piracy Legislation”. Daily Herald 19
January 2012: 11. Print. Read More
Share:
Tags
Cite this document
(“Bills like ACTA (Anti-Counterfeit Trade Act) and PIPA (Protect IP Act) Research Paper”, n.d.)
Bills like ACTA (Anti-Counterfeit Trade Act) and PIPA (Protect IP Act) Research Paper. Retrieved from https://studentshare.org/history/1596849-bills-like-acta-anti-counterfeit-trade-act-and-pipa-protect-ip-act-should-not-be-enacted

The Recent Surge in Counterfeit Bills

...to experience worsening of the economy due to increase counterfeits in either products or money (Haie-Fayle & Wolfgang, 2007). No one can deny that the problem of counterfeiting is an extraordinarily well defined one. Other than causing serious negative impacts on the economy of a nation, counterfeits reduce consumer confidence in respect to the products and money that they handle (August & Hwang, 2009). According to the studies conducted by Alcock, Chen, Hui, and Hodson (2003), rise in counterfeits provides Americans with adequate reasons to come up with effective measures of dealing with the problem. One such measure is the introduction of the Prioritizing Resources...
10 Pages(2500 words)Essay

In Favor of the Protect Life Act

...is that it creates a favorable and just society, while leading to a minimal wastage of the tax payers’ money. After seriously deliberating and pondering on the varied aspects of law, American values and the available statistics, I have decided to emphatically support the Protect Life Act. I strongly and reasonably believe that the American tax payers’ money should not be wasted on facilitating, funding and allowing abortions. It is not only contrary the time tested Western ethics, but also does not make a sound economic sense. Many people are perhaps simply not aware of the fact that abortion currently qualifies to be labeled a gargantuan problem for our society that is undermining its...
3 Pages(750 words)Research Paper

...cars that have doors that open vertically cannot do so without obtaining permission from the one who registered the car under the Design Act. That is the purpose of the Design Act. On the other hand, what the owner calls such a car is protected under the Trade Marks Act. Let us assume the owner decides to call the car VertCar. The name VertCar will be protected by the Trade Mark's Act. So if another person calls any other car or item VertCar or VertKar, the owner can take action and claim that the name is already registered. And the claims will be based on the Trade Marks...
6 Pages(1500 words)Essay

The SOPA and PIPA Act

...of media and those who call the digital world of the World Wide Web as their own. He narrates that it is about time that the media people should stop fighting those illegitimately using their content and should intelligently tackle them by befriending them instead. This is more likely to help the issue of online piracy. The author narrates how SOPA and PIPA are relatively strict acts and they may curb the freedom of expression on the World Wide Web which was initially targeted as its major use. The proposed bills received far reaching opposition from not only internet firms but also from individuals. As a result the...
7 Pages(1750 words)Admission/Application Essay

...Question One The Sherman Antitrust Act 1890 is the first legislation that was passed by the United s congress to prohibit trusts and to curb the power that was associated with the trust that restricted trade and reduced economic competition. The Act was named after Senator John Sherman who proposed it in the congress. Sherman Antitrust Act was enacted amidst the response to the outcry and perception of the public that the economy of United States was dominated by trusts and that the industrial power of the nation was concentrated in too few hands (Koutsoudakis,pg.5). Prior to the enactment of the Sherman Act, large...
4 Pages(1000 words)Essay

...Business History Sherman Anti-Trust Act and other anti-trust laws More considerably, the main function of theanti-trust law was to eliminate the illegal conduct among the dealers in the market as it intended to promote free and fair marketplace competition (Kolko 126). The regulation by the anti-trust law was to curb the upcoming trends in, which several businesses in the US intended to eliminate competition that involved illegal means of businesses fixing prices before assigning specific market domains to different competitors within an industry. Even though, the intent reason behind Sherman Act formulation was to forbid the existence of monopolies, its...
3 Pages(750 words)Essay

Impact of SOPA and PIPA Bills

...the internet service providers and the internet users.   An Overview of SOPA and PIPA These days, we can see the Protect IP Act (PIPA) and the Stop Online Piracy Act (SOPA) in the top headlines. In fact, the Stop Online Piracy Act and the Protect IP Act are getting a great deal more negative response from different organizations. In addition, some of the major web based businesses for instance Wikipedia have responded against these laws by protesting the bills with blackouts. Additionally, Google Corporation has also joined the movement, by placing a...
10 Pages(2500 words)Research Paper

...Yvonne Marie Leyson For: Unidentified VII in the Workplace 10 March, 2006 VII otherwise known as the Anti-Discrimination Act is currently the most valuable tool to combat today's discrimination of employees in the work environment. For several centuries, this imperialistic attitude bordering on cruelty has been the biggest problem besieging the country. History relates how colored people are avoided like the plague. Women are treated as second-rate citizens. Religious and cultural practices are being laughed and shunned. Our journey towards economic stability and social awareness opened our consciousness that we need to interact with others in order to grow. The dream of peace and...
2 Pages(500 words)Essay

...language of the TILA included class rescissions, the KF will like prevail because of the Congressional intent in protecting consumers along with the KF seeking a judgment as a class in order to then individually seek rescission justify class rescissions under the TILA. The KF will also likely prevail because their particular situation can only be remedied by class rescissions. Discussion The TILA was enacted in 1968 to ensure that creditors provide a meaningful disclosure of credit terms giving the consumer the ability to easily compare the various credit terms available to them and avoid uniform uses of credit. Truth and Lending Act, 15 U.S.C. 1601...
10 Pages(2500 words)Essay

Counterfeiting is a big business in the world today. It is so big that the total volume of counterfeit (and pirated) goods in the world exceeds the GDP of certain countries. The International Anti-counterfeiting Coalition (IACC) estimates this figure at around 600billion dollars per year. The sad fact is that the menace is growing and many countries and organizations negatively affected by it are quite helpless to find a solution to the menace. The IACC says that the growth of counterfeiting over the last twenty years has been about ten thousand percent. Astonishingly, one of the reasons behind this growth is the consumer demand for counterfeit goods. This paper is an assessment of the counterfeit auto parts industry in the United...
11 Pages(2750 words)Assignment
sponsored ads
Save Your Time for More Important Things
Let us write or edit the research paper on your topic "Bills like ACTA (Anti-Counterfeit Trade Act) and PIPA (Protect IP Act) should not be enacted" with a personal 20% discount.
GRAB THE BEST PAPER

Let us find you another Research Paper on topic Bills like ACTA (Anti-Counterfeit Trade Act) and PIPA (Protect IP Act) should not be enacted for FREE!