Comments (0)
Add to wishlistDelete from wishlist
Cite this document
Summary
In the year 1812, the United States of America was inexorably headed for war with Britain. The years after the American…
Download full paperFile format: .doc, available for editing
HIDE THIS PAPERGRAB THE BEST PAPER96.5% of users find it useful 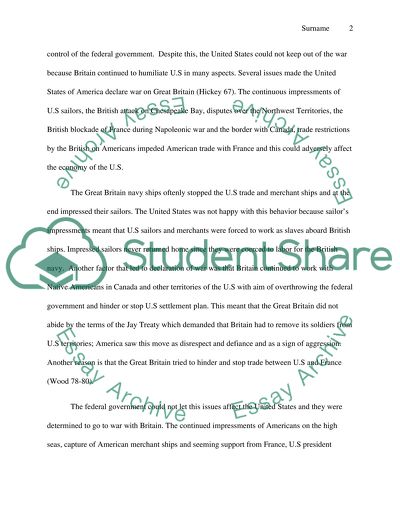 Reasons why U. S Declared War on Great Britain The war of 1812 between the U.S and the Great Britain lasted from 1812 to1815 and was mainly fought on land, coasts and waterways of North America. In the year 1812, the United States of America was inexorably headed for war with Britain. The years after the American Revolution had come to an end, France experienced its own revolution in 1789 and that the French society descended into total horror. Great Britain played a part in planning to overthrow the French revolution by organizing coalitions between 1793 and 1815 which was headed by Napoleon Bonaparte (Borneman 56). The events in France shaped the American society in that during this time, American people thought that it was justifiable and right for United States to go into war on behalf of France in a move that would be seen as returning the favor France had done to them by assisting America during the American Revolution. Most people in America did not know the extent of terror in France believing it to be a revolution.
Most Americans reasoned that the terror in France was a temporary exuberance of the spirit of the revolution and would soon settle down. Under the leadership of George Washington, America was not ready to enter a foreign war. Washington was aware that America had no enough to engage in the war and was still struggling to unite and bring its own citizens under the control of the federal government. Despite this, the United States could not keep out of the war because Britain continued to humiliate U.S in many aspects. Several issues made the United States of America declare war on Great Britain (Hickey 67). The continuous impressments of U.S sailors, the British attack on Chesapeake Bay, disputes over the Northwest Territories, the British blockade of France during Napoleonic war and the border with Canada, trade restrictions by the British on Americans impeded American trade with France and this could adversely affect the economy of the U.S.
The Great Britain navy ships oftenly stopped the U.S trade and merchant ships and at the end impressed their sailors. The United States was not happy with this behavior because sailor’s impressments meant that U.S sailors and merchants were forced to work as slaves aboard British ships. Impressed sailors never returned home since they were coerced to labor for the British navy. Another factor that led to declaration of war was that Britain continued to work with Native Americans in Canada and other territories of the U.S with aim of overthrowing the federal government and hinder or stop U.S settlement plan. This meant that the Great Britain did not abide by the terms of the Jay Treaty which demanded that Britain had to remove its soldiers from U.S territories; America saw this move as disrespect and defiance and as a sign of aggression. Another reason is that the Great Britain tried to hinder and stop trade between U.S and France (Wood 78-80).
The federal government could not let this issues affect the United States and they were determined to go to war with Britain. The continued impressments of Americans on the high seas, capture of American merchant ships and seeming support from France, U.S president Madison bowed to political and public pressure by asking the congress to declare war on Great Britain.
Summarily, it is evident that the issues that pressed the federal government to declare war on Great Britain were weighty since they have undermined an economy of country that was struggling to build her new economy and reorganize her people.
Works Cited
Borneman, Walter. 1812: The War That Forged a Nation. New York: Harper Perennial, 2005.
Print.
Hickey, Donald. The War of 1812: A Forgotten Conflict, Bicentennial Edition. New York:
Prentice Hall, 2012. Print.
Wood, Henry. The war with the United States: A chronicle of 1812. Toronto: University of
Toronto, 2011. Print. Read More
Share:
Tags
Cite this document
(“History Discussion Research Paper Example | Topics and Well Written Essays - 500 words - 5”, n.d.)
History Discussion Research Paper Example | Topics and Well Written Essays - 500 words - 5. Retrieved from https://studentshare.org/history/1593011-history-discussion

CHECK THESE SAMPLES OF History Discussion

... First of all, I do not agree to the assertion of General Leonard Wood that the Cubans fully believed and considered the U.S. as their liberator that time. One reason is that many of the Cubans during that time were doing protest and resistance movement for their real freedom. The U.S. do not really gave independence to the Cubans from the Spaniards that time. Instead, Cuba became a new territory of U.S. by the very systematic manner of annexation. Also, the Cubans might not agree with Wood’s notion of U.S. as a “their faithful friend” for it has a different agenda behind its actions towards Cuba. The U.S. said that the reason for their action towards Cuba is primarily for humanitarian purposes and to help the country improve... First of all, ...
1 Pages(250 words)Assignment

... Great awakening Introduction The great awakening was a spiritual revival and renewal that was witnessed in the American colonies especially New England in 1730s and 1740s. This movement deemphasized the significance of the church doctrines or teachings and instead emphasized on greater significance on the individual and the spiritual status. In addition, Christians began to deemphasize themselves with the set up approach to worship at a time which resulted to a general sense of resonant and complacency among Christians and instead, they adopted a way comprised of great emotion and fervor in prayer. The great awakening was started by the Wesley brothers, Jonathan Edwards and George Whitefield in England and moved to American... Great...
2 Pages(500 words)Research Paper

...Hamilton’s Fiscal Policies Introduction Alexander Hamilton was an intriguing individual, a self-made man who possessed a kind of ambition that fueled incredible success. He was born to a single mother in the West Indies who earned her living as a shopkeeper and she taught Hamilton his first economic principles. He later went on to a big mercantile firm as an apprentice. These modest beginnings paved way for Hamilton’s becoming the principal activist for a contemporary capitalist economy in the early national US (Ushistory.org, 3). This paper discusses Hamilton’s contributions and proposals to the congress on the fiscal and monetary policies. It also looks at how Alexander Hamilton’s policies wanted to use the wealthy,...
2 Pages(500 words)Research Paper

... New England, Chesapeake and Middle Colonies Slavery in Chesapeake took preeminence a century after the slavery statute was legalized by law makers. The enslaved, who comprised of women, men and children, toiled to produce grains and tobacco that ultimately led to elegant lifestyle of the gentry. Culture of the native born with main reference to slaves was mainly inclined on both Anglo and African culture. The people enslaved had a good working knowledge on English and this helped them in laborer negotiations with their masters and also to articulate issues of benefits both for them and the families that they emanated from (Berlin 34-35). Puritans and the Pilgrims were the initial settlers of New England. The economy was majorly... New...
1 Pages(250 words)Research Paper

...History Discussion Compare the Strengths and Weaknesses of the Confederation Government. Was It Doomed to Failure? Why? The initial written plan of government for United States is the Articles of Confederation that lasted from the year 1776 to 1781. The confederation government approved every immunities and constitutional rights to every free citizen belonging to different states. Moreover, the government allowed its citizens to be taxed and also delivered a strong amendment process. In addition, the confederation government generates a stronger national government by introducing taxation reforms along with various amendment systems (Richardson, “Social Studies Item Specifications for the Alabama High...
1 Pages(250 words)Research Paper

..., and the presidential election in the house when none of the candidates receives a majority in the process. Further, the campaigns were more of the candidate’s regional rivalries and personality than divisive national issue and partisan politics. In fact, candidates did not campaign, but the actual campaigning exercise was carried out by surrogates and mangers, with various partisans speaking and writing in candidates’ favor throughout the year. The presidential election involved three key figures in the History of America, and was decided in the House of Representatives. Here, one man won, the other helped him win, yet another one stormed out of Washington criticizing the whole affair as “ a corrupt bargain” The dubious...
2 Pages(500 words)Research Paper

... with as the officials still held their positions in the government thereby covering up any attempt to uncover their actions. This led to starting of a campaign that was aimed at eliminating all officials that had corruption records but this move was unsuccessful (Brinkley, & Dyer 2004, p. 94). Works Cited Brinkley, Alan, and Davis Dyer. The American History. New York: Houghton Miffin Harcourt, 2004. Print.... President Jackson administration President Jackson administration cannot be said to be successful despite his era being characterized with passing of many bills. The bills that were passed during President Jackson era were many than all the previous presidents bills combined (Brinkley, & Dyer 2004). Despite the president making a tremend...
1 Pages(250 words)Research Paper

...﻿ History Discussion The 1924 Immigration Act is one thing that was a very good step by the government of USA. In my opinion limiting the number of people coming to the country was a thoughtful thing as it could help many people from our own country establish themselves in a much better way. It was just after the wartime period and many people were coming back themselves and they did not have jobs. This jobless situation was the worst thing that could have happened. When there is the scarcity of jobs, people steal, kill and commit heinous crimes. The Immigration Act, in my opinion, was one very effective way to curtail the possible hazards that could occur in the society (Murray, 2008). The...
2 Pages(500 words)Essay
sponsored ads
Save Your Time for More Important Things
Let us write or edit the research paper on your topic "History Discussion" with a personal 20% discount.
GRAB THE BEST PAPER

Let us find you another Research Paper on topic History Discussion for FREE!