Comments (0)
Add to wishlistDelete from wishlist
Cite this document
Summary
At present United States occupies number one position in terms of economic and military might. China wants to be there and knocks at…
Download full paperFile format: .doc, available for editing
HIDE THIS PAPERGRAB THE BEST PAPER91% of users find it useful 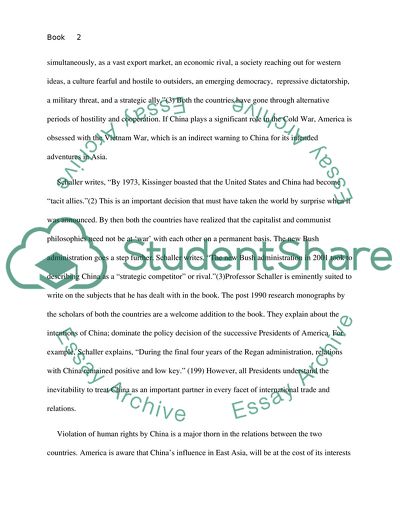 History and Political Science March 9, Topic: Book Report
Introduction
The main problem with United States of America and China is like the proverbial scabbard that cannot accommodate the two swords at the same time. At present United States occupies number one position in terms of economic and military might. China wants to be there and knocks at the portals of that position, threateningly from all ends. The relations between the two countries swing like a pendulum over the years. In this book, Schaller reviews the overall position of the two countries for over a century. The friction point is not only economics and trade. The collision of cultures is an important issue and their societal outlooks are poles apart.
China is an enigmatic communist country. It has given up the path of hardcore communism since the demise of the founder of the communist regime Mao Tse Tung. Michael Schaller has elucidated in the book a good interpretive history of the Sino-American relations, in which he deals with the multi-dimensional issues that confront both the countries in their efforts to steal the march over each other. For USA, the question is to retain its hold on the present position. China will not be satisfied unless USA is relegated to number two. It is a tough task to understand the complexities of China-America relations in the last century and into the next. Describing the enigmatic position of China Schaller argues, “It has been perceived often simultaneously, as a vast export market, an economic rival, a society reaching out for western ideas, a culture fearful and hostile to outsiders, an emerging democracy, repressive dictatorship, a military threat, and a strategic ally.”(3) Both the countries have gone through alternative periods of hostility and cooperation. If China plays a significant role in the Cold War, America is obsessed with the Vietnam War, which is an indirect warning to China for its intended adventures in Asia.
Schaller writes, “By 1973, Kissinger boasted that the United States and China had become “tacit allies.”(2) This is an important decision that must have taken the world by surprise when it was announced. By then both the countries have realized that the capitalist and communist philosophies need not be at ‘war’ with each other on a permanent basis. The new Bush administration goes a step further. Schaller writes, “The new Bush administration in 2001 took to describing China as a “strategic competitor” or rival.”(3)Professor Schaller is eminently suited to write on the subjects that he has dealt with in the book. The post 1990 research monographs by the scholars of both the countries are a welcome addition to the book. They explain about the intentions of China; dominate the policy decision of the successive Presidents of America. For example, Schaller explains, “During the final four years of the Regan administration, relations with China remained positive and low key.” (199) However, all Presidents understand the inevitability to treat China as an important partner in every facet of international trade and relations.
Violation of human rights by China is a major thorn in the relations between the two countries. America is aware that China’s influence in East Asia, will be at the cost of its interests and it is watching with concern the period of transition that is in motion at present. In its enthusiasm to improve the bilateral relations, America should not forget the ground realities as for the deteriorating human rights in China. China’s export goods include the ones produced by prisoners, many of them behind the bars for political offences. The unpaid labor in the prison workshops makes it possible for China to offer cheap rates in the export market. America should not become partner in the system of oppression in vogue in the Chinese labor market.
Conclusion:
Schaller has a good grasp of the agenda of political and economic issues concerning both the countries. China’s manufacturing infrastructure heavily depends on the export market, as its domestic consumption is meager. America is the largest importer of consumer goods from China in the world, which indirectly helps China to maintain its economic supremacy. America should approach with caution for providing technical expertise and investment in China. The concern of America to improve the democratic values and human rights in China can be served through personal interaction between the citizens of the two countries and through business links. Internet revolution works silently, by dissemination of knowledge, to make the concept of ‘the world is one family,’ an attainable reality. America cannot risk alienating China on the economic, political and military fronts nor can it extend the hand of friendship on all counts on an ongoing basis.

CHECK THESE SAMPLES OF Book Report

...Philosophy, Book Report/Review Topic: Book Report: Iraq under Siege: The Deadly Impact of Sanctions and War George Bush leads the country into a global war on terrorism. His current drive to invade Iraq is the part of that policy. To hit back for the tragic events of 9/11, the President thinks that he must strike back on terrorists immediately and he has chosen Iraq as a target for that. The President is discharging his responsibilities to protect America. He has garnished many supporters, both at the national and international levels, for his sanctions against Iraq. This aspiration for political victory through sanctions has taken massive toll in Iraq in many areas like...
3 Pages(750 words)Book Report/Review

...? Book Report/Review, Family and consumer science of the Book Report/Review, Family and Consumer Science Introduction Parenting is themost loved as well as dreaded word. Loved, for it is the unique source of joy to be experienced, and the one who experiences it only knows what an awesome state of activity it is! Dreaded, for it is often an issue of tremendous and nerve-wrecking responsibilities thrown on the parents. The authors of the book “Parenting Teens with Love and Logic: Preparing Adolescents for Responsible adulthood” Foster Cline and Jim Fay (2006) sound the warning bells in the beginning of the introduction to their book. They...
3 Pages(750 words)Book Report/Review

The Healing Power of Music

...Book Report America emerged as strong and triumphant despite the grievous wars it had participated in and which affected numerous global states to the extent of leaving some – Britain, for example – economically unstable. This was due to a colossal funding needed to maintain the country’s power over the colonies it had acquired. However, the awaited freedom among the Americans both interiorly and exteriorly had some serious defects, which rendered equality nonexistent among the country’s population. This was evident during the McCarthyism era, when certain individuals in the American leadership were suspected to be communist traitors. McCarthy observed how some of the state’s top and influential people...
2 Pages(500 words)Assignment

...PSYCHOLOGY Topic: A Field Guide to Boys and Girls Book Review Introduction It is only by guidance and approval based on loveof the parents or carers that a child is able to grow without the influence of gender challenges. In her book A Field guide to boys and girls, Susan Gilbert tries to bring together all possible research done on gender development in order to make up a resource for parents to use in their children’s development. There is a lot that transpires during the transition period of a child right from birth up to the adolescence stage. The role of the parent concerning the child’s education is to ensure that they bring the best out of the child (Gilbert, 2001). It is true that there are natural differences between boys...
6 Pages(1500 words)Book Report/Review

...On Dreams – Sigmund Freud “On Dreams” by Sigmund Freud is the of review for the paper, which aims at exploring various dimensions of the interpretation of our dreams. Sigmund Freud was a neurologist from Austrian origin, and later made striking investigations on Psychoanalysis (Krul & Kulikov 2006). He was a qualified medical doctor, and later carried out various researches on neurology. On treatment of a patient, he developed psychoanalytical techniques based on which he recorded some observations which made huge breakthroughs in the subject of psychology (Freud 1938). The book under consideration, on dreams, is also the product of one of his psychoanalytical investigations. In this book, Freud systematically places the dreams... by the...
8 Pages(2000 words)Essay
sponsored ads
Save Your Time for More Important Things
Let us write or edit the book report/review on your topic "Book Report" with a personal 20% discount.
GRAB THE BEST PAPER

Let us find you another Book Report/Review on topic Book Report for FREE!