Comments (0)
Add to wishlistDelete from wishlist
Cite this document
Summary
Amartya Sen, with his Cambridge scholastic excellence with an ethical angle of scientific evaluation of economics, has clearly visualized his emphatic wisdom for the reform of the world’s financial thoughts. The 1998 Nobel laureate of Indian origin has brought new schools of…
Download full paperFile format: .doc, available for editing
HIDE THIS PAPERGRAB THE BEST PAPER95.4% of users find it useful 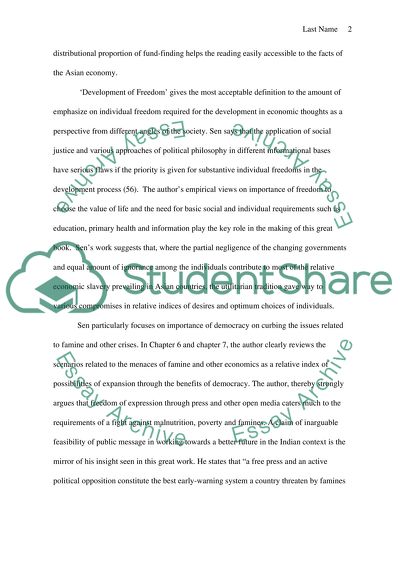 Add (Add (Add ‘Development as Freedom Book Review Amartya Sen, with his Cambridge scholastic excellence with an ethical angle of scientific evaluation of economics, has clearly visualized his emphatic wisdom for the reform of the world’s financial thoughts. The 1998 Nobel laureate of Indian origin has brought new schools of thoughts in the economic development policies as a relationship with liberty of individuals in political and civilian choices while citing examples from various Asian countries. Sen’s work on “Development as Freedom” can only be seen as the encyclopedia of chronological events in the development of many countries after their collateral damages due to coercive social systems as well as authoritarian political administration.
The book was made on the ground of studies required for the renaissance alarms in the events and their aftermath followed by continuous sessions of inflations and capital losses incurred by leading Asian economies like the Middle-East gulf countries and India as against the rise of China from the verge of total poverty. Amartya Sen’s views of the aspect ‘freedom’ have been clearly explored throughout his logical analyses taking the support of various religious perspectives based on stories related to human needs and ends. More preferably, Sen notes that freedoms of different kinds in the social life not only bring development of living conditions, but also act as the means of most the reforms in socio-economic growth (11). The author’s candid style of linking the morals from great episodes of ancient Indian religious beliefs with the present day’s quest for uneven distributional proportion of fund-finding helps the reading easily accessible to the facts of the Asian economy.
‘Development of Freedom’ gives the most acceptable definition to the amount of emphasize on individual freedom required for the development in economic thoughts as a perspective from different angles of the society. Sen says that the application of social justice and various approaches of political philosophy in different informational bases have serious flaws if the priority is given for substantive individual freedoms in the development process (56). The author’s empirical views on importance of freedom to choose the value of life and the need for basic social and individual requirements such as education, primary health and information play the key role in the making of this great book. Sen’s work suggests that, where the partial negligence of the changing governments and equal amount of ignorance among the individuals contribute to most of the relative economic slavery prevailing in Asian countries, the utilitarian tradition gave way to various compromises in relative indices of desires and optimum choices of individuals.
Sen particularly focuses on importance of democracy on curbing the issues related to famine and other crises. In Chapter 6 and chapter 7, the author clearly reviews the scenarios related to the menaces of famine and other economics as a relative index of possibilities of expansion through the benefits of democracy. The author, thereby strongly argues that freedom of expression through press and other open media caters much to the requirements of a fight against malnutrition, poverty and famines. A claim of inarguable feasibility of public message in working towards a better future in the Indian context is the mirror of his insight seen in this great work. He states that “a free press and an active political opposition constitute the best early-warning system a country threaten by famines can have,” (181) and “potential famines have been prevented from occurring in India since independence” (169).
Overall, the book ‘Development as Freedom’ is a looking glass for the economists and research scholars for their exploration of their desired fields with a more spiritually fixed handle of ethics and emotions, rather than norms and notions generally ruled the concept of economics. On the other way, it may be said, that the book is first of its kind to hold a value of emotional and spiritual prominence of choices of individuals as a relationship with the macro-level analysis of the total economy of a region. The book surely serves the worth of the author’s efforts for explaining most of the scenarios; however, the literature and the terminology applied in the description make the reading a real task for common readers.
Works Cited
Sen, Amartya. Development as Freedom. New York: Oxford University Press, 1999. Print. Read More
Share:
Tags
Cite this document
(“Economic Development Book Report/Review Example | Topics and Well Written Essays - 500 words”, n.d.)
Retrieved from https://studentshare.org/history/1590519-economic-development

CHECK THESE SAMPLES OF Economic Development

...?Economic Development Economists’ change of approach Yesterdays were the period of economists who were focused on industrialization and urban development. They were of the view that urban development is the sole driving force of an economy. They proposed for subsidies and tax concessions for companies for setting up business in a particular area or region. In some cases even farm lands were sold to big companies for expanding their presence in the country. All these were done by completely ignoring the rural areas of the country. Development of cities and high rise buildings were considered to be the picture of development. Therefore, in most developing countries, a wide gap can be seen between the rich and the poor unlike... % of the total...
14 Pages(3500 words)Essay

...?Economic Development The International Monetary Fund (IMF) is an organization providing advices and financial supports to the member nations at the time of situations of economic instability. The programs initiated by the organization have led to the growth of many developing as well as the developed countries of the world. The main focus of the organization is on the macroeconomic policies of the country and also helps in correcting discrepancies in the balance of payment of the country. The support provided by IMF through the issue of Special Drawing Rights to the member nations have helped in achieving economic...
10 Pages(2500 words)Research Paper

...? Each question should be only two to three typed pages, times new roman, twelve point font and at one and a half spacing. Part One: Compulsory Question 1. With reference to your team’s group of countries identify and discuss key features of inequality in developing countries. To what extend does the international environment positively or negatively magnify the situation? One remarkable indicator of inequality in North Africa is unemployment, which only enhances the tough condition of poverty, not to mention the inability of the government to supply the actual needs of its people. In this way, the government in North Africa needs to remarkably consider making some ways in order to make both ends meet for its people....
3 Pages(750 words)Essay

... Economic development Economic development refers to a community’s or policy makers’ set of sustained and concerted actions aimed at promoting the economic wellbeing and standard of living of a given area. These actions entail developing environmental sustainability, regional competitiveness, social inclusion, safety, health and literacy. As mentioned above, economic development focuses on improvements of certain indicators such as literacy levels. In short, economic development aims at having a sound local economy that attracts investment, creates employment opportunities for the people, increases the tax base and generates more revenue (Cypher and James, pg. 10). For a country to be termed as developed economically... , and then there are...
1 Pages(250 words)Essay

... Economic Development Reading Productivity Growth in World Agriculture The developments in agricultural production started inthe 20th Century with the introduction of modern scientific methods. However, some countries were not capable of embracing the technological changes and still used the natural resource-based methods. Challenges, such as population rise, increased agricultural production demands and growth in incomes. In this regard, agriculture has helped in the economic development of developing and populous countries. For instance, in the ‘60’s, new perspectives incorporated agricultural science and economics in a bid to transform the sector into capital intensive. Reading 2: The Next Green Revolution This reading focuses... on the...
2 Pages(500 words)Coursework

7 Pages(1750 words)Book Report/Review
sponsored ads
Save Your Time for More Important Things
Let us write or edit the book report/review on your topic "Economic Development" with a personal 20% discount.
GRAB THE BEST PAPER

Let us find you another Book Report/Review on topic Economic Development for FREE!