Comments (0)
Add to wishlistDelete from wishlist
Cite this document
Summary
The author states that every American city has its unique response to change. This paper aims to present the purview of the responses to Progressivism and the fiscal crisis of America’s New York City which shaped the city’s political and economic frameworks.  …
Download full paperFile format: .doc, available for editing
HIDE THIS PAPERGRAB THE BEST PAPER93% of users find it useful 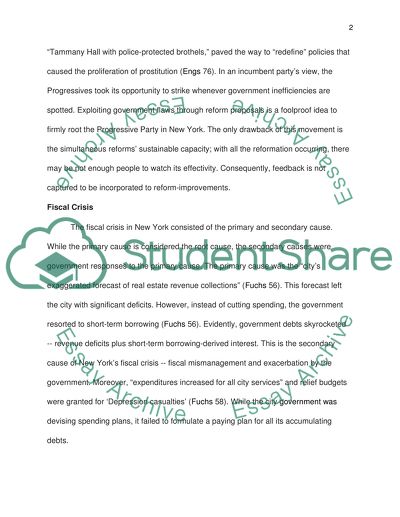 Extract of sample "Progressivism and Fiscal Crisis: A Purview of New Yorks Radical and Fiscal History"

Progressivism and Fiscal Crisis: A Purview of New York’s Radical and Fiscal History Introduction Every American has its unique response to change. Changes, which were spurred by the US country as a whole, cascaded into its cities and gave them the opportunity to respond in accord to its unique composition or demographic profile. This paper aims to present the purview of the responses to Progressivism and fiscal crisis of America’s New York City.
Progressivism
The Progressivism is a political party that existed together with the Republicans, Democrats and Socialists in US. An English political out-pour and American adopted-movement, progressivism targeted the inefficiencies within the governments, as well as introduced reform coalitions and invented “methods of mobilizing public opinion” through “muck racking, celebrity picket line, forcing of an official witness-calling investigation, launching of a referendum campaign,” and poring over the city planner or commission government’s outputs (Rodgers, “Atlantic Crossings” 52; Thelen 1885 qtd. in Rodgers, “In Search of Progressivism” 117). Progressivism caused a lot of civil-focused reforms via the amendment of the Constitution; these reforms covered or created the personal income tax, Federal Reserve, antitrust laws, immigration-restrictions and food regulation (Leonard 207).
A significant highlight of progressivism in New York City is its participation in the reformation of prostitution in the Tammany Hall. A published report, which linked “Tammany Hall with police-protected brothels,” paved the way to “redefine” policies that caused the proliferation of prostitution (Engs 76). In an incumbent party’s view, the Progressives took its opportunity to strike whenever government inefficiencies are spotted. Exploiting government flaws through reform proposals is a foolproof idea to firmly root the Progressive Party in New York. The only drawback of this movement is the simultaneous reforms’ sustainable capacity; with all the reformation occurring, there may be not enough people to watch its effectivity. Consequently, feedback is not captured to be incorporated to reform-improvements.
Fiscal Crisis
The fiscal crisis in New York consisted of the primary and secondary cause. While the primary cause is considered the root cause, the secondary causes were government responses to the primary cause. The primary cause was the “city’s exaggerated forecast of real estate revenue collections” (Fuchs 56). This forecast left the city with significant deficits. However, instead of cutting spending, the government resorted to short-term borrowing (Fuchs 56). Evidently, government debts skyrocketed -- revenue deficits plus short-term borrowing-derived interest. This is the secondary cause of New York’s fiscal crisis -- fiscal mismanagement and exacerbation by the government. Moreover, “expenditures increased for all city services” and relief budgets were granted for ‘Depression casualties’ (Fuchs 58). While the city government was devising spending plans, it failed to formulate a paying plan for all its accumulating debts.
New York City’s fiscal difficulty is explained by the aforementioned events. The Chicago City had a different story to tell. While the causes of fiscal crisis were deemed similar for the two cities, the response of each city was essentially different (Fuchs 41). The city government of New York responded through targeting short-term goals and neglected the long-term goal of achieving fiscal stability. The Chicago government, on the other hand, responded through spotting the holes of the fiscal policies and fixing them, which insulated the city from further fiscal crisis (Fuchs 41). The act of fixing the fiscal policy process of Chicago City enabled them to sustain from any fiscal attacks, while the lack of it in New York City exposed and weaken its fiscal condition.
Conclusion
New York City’s progressivism and fiscal crisis shaped the city’s political, social and economic frameworks. It had invented and laid mechanisms and opportunities to succeed and fail. Most important amongst these two events’ contributions is aiding the government and its citizen to realistically view the sustainable health required to make New York City a prosperous city.

CHECK THESE SAMPLES OF Progressivism and Fiscal Crisis: A Purview of New Yorks Radical and Fiscal History

.... Natural disasters affected government revenue because of the negative impacts on production that led to loses. The government focuses to return the budget surplus in 2012-13. This means that the government will work towards strengthening its resources to support businesses that will ensure that the economy stabilizes. The fiscal consolidation is intended to increase the government’s capacity to monitor economic growth and respond to future anticipated natural disasters. There is a focus to increase the budget surplus in three years, when after the global financial crisis, the fastest fiscal consolidation has occurred (Australian Government 2011). The government has made some...
7 Pages(1750 words)Essay

..., wage suppression on the employees and so on. There has been a problem of inter temporal budget and the huge deficits are actually burdening the current generation as well as the future generation. One of the analysts in New York Times stated that, “taxpayers will end up paying the costs of today’s deficits tomorrow” (Ackerman, 2004). But in this situation tax regime has to be tightened for bringing dynamic stability to the US economy and sacrifice has to be made now. Future Social Security and Medicare users Owing to the huge fiscal deficit, the Patient Protection and Affordable Care Act enacted by the current President Obama directs towards access of equality, affordable health care...
3 Pages(750 words)Essay

...in the US to the sub-prime crisis has used progressive cuts in interest rates in an attempt to influence the real behaviour of the economy, not just the price level, while fiscal policy has been used in an attempt to stimulate expenditure” (Lipsey, 2008). The fiscal stimulus package of the US can be considered as a strategy of ‘Pump Priming’ due to the priming effect intended by the government in the economic process. “The American Recovery and Reinvestment Act of 2009 distribute funds in three ways. Since its enactment in February 2009, $774.7B has been paid out, by way of tax benefits $290.7 B, Contracts, Grants and Loans $ 246 B and Entitlements $ 238 B” (RECOVERY.GOV,...
7 Pages(1750 words)Essay

Explore Populism, Progressivism, the New Deal and the War on Poverty. Compare their goals noting similarities, differences, short term, and long term successes and failures. Draw conclusions from your comparisons

...the ways in which a given government can seek to maintain the optimal balance of freedom, equality and solidarity in order to proceed within such a difficult economic and political environment as the current one our nation is experiencing. With the situation regarding the United States’ “Fiscal Cliff” as it has been called, the situation is with regards to a host of tax cuts and new austerity measures that are due to go into affect the first of this coming year (2013) – if not legislative or executive actions are taken to ally them (Alinsky 2012). The purpose of this piece is not to argue between either fiscally liberal or conservative policies as a panacea to the ills of our current...
5 Pages(1250 words)Essay

...Fiscal Policies In response to the recent financial crisis, the U.S. federal government adopted a fiscal policy that involved tax cuts and increased spending on stimulus packages to revive different sectors of the economy. However, the federal government revised this policy to the extent that in 2013, the government massively cut its spending and raised taxes. The country had to contend with a cut of roughly 85 billion USD to in a bid to sequester the government’s debt. The country also adopted a policy to the effect that wealthy Americans will have to pay even more in taxes. The fiscal policy has been instituted to see the government earn more revenue which is to be...
1 Pages(250 words)Assignment

Let us find you another Assignment on topic Progressivism and Fiscal Crisis: A Purview of New Yorks Radical and Fiscal History for FREE!