Comments (0)
Add to wishlistDelete from wishlist
Cite this document
Summary
The author discusses the background of the research this particularly would include Philippine history and its subjugators. The author also incorporates current information or status of the Philippines in line with its leadership in governance, politics, economy, and culture. …
Download full paperFile format: .doc, available for editing
HIDE THIS PAPERGRAB THE BEST PAPER92.1% of users find it useful 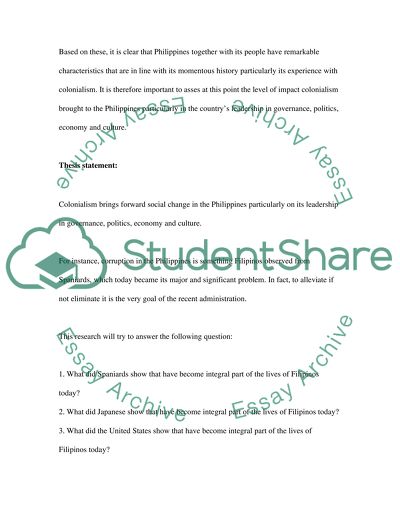 Sustainable Development and its overall impact

...that the southern debts represent Western economic and political control, and has little to do with money and finance. These four cases will be presented logically and with supportive details. This essay shall then be summarized and concluded based on the specific points discussed within the text. This paper is being carried out in order to establish a strong and decisive assessment of the statement, specifically on the issue of southern debts. Body 1. Impact of Colonialism in Africa The African continent is made of a group of countries which are largely considered developing. Years of colonialism and exploitation from the Western countries depleted their natural...
12 Pages(3000 words)Essay

Impact of Colonialism on the Middle East

...is derived from Latin word Imperium which means to command. It is thus a way that one country exercises power over another, whether through settlement, sovereignty or indirect control, without significant settlement. Typical examples include Africa, American domination of Philippines and Puerto Rico. Colonialism in the Middle East: European colonial activity in Africa and Middle East reached the peak in the late 19th and early 20th century. The British became heavily involved in the affairs of Egypt and Sudan. The British annexed Aden in 1839. The British and the French built and operated the Suez Canal in 1869; Britain went to war with Iran in 1856 over night of way to India and China...
8 Pages(2000 words)Term Paper

The Colonialism in the Philippines

...? Assessment of the overall impact of colonialism in the Philippines Naif Alyamani ID# 100261845 Essay Draft The Philippines is a Southeast Asian nation that has been subjugated by the Spanish, the Japanese, and the Americans throughout its history. It is for this reason that the country is a significant subject for an assessment of the overall impact of Colonialism. Colonialism in the Philippines is something that remarkably emphasized Filipinos’ resistance against its subjugators1. In fact, Filipino revolutionaries and anti-imperialists...
8 Pages(2000 words)Essay

...Colonialism The largest colonizers in the history of the world-Britain-built an empire over which the "sun never set". (Wikipedia-British Empire) By1930, a quarter of the world's population lived under the British Imperialist umbrella. Even today, after most of these nations have become independent, the British legacy in the form of language, religion, and political, legal, judicial and educational systems, is evident in her former colonies. In this essay we propose to discuss three pieces relating to the British colonial period in the Indian Subcontinent (the term 'subcontinent' in this context includes-apart from India-the countries of Pakistan, Afghanistan, Nepal, Bhutan, Tibet,...
14 Pages(3500 words)Book Report/Review

...Philippines The Philippines is a group of islands in the tropics in the western edge of the Pacific Ocean and is one of the largest island groups in the world. It is surrounded by the Pacific Ocean and other bodies of water including South China Sea, Philippine Sea, and Celebes Sea. The country is comprised of three major regions – the largest island, Luzon (pronounced as loo-ZONE) in the north; the Visayas (vee-SIGH-uhs), an island group in the center; and Mindanao (MIN-da-now), the second- largest island, and the Sulu (soo-loo) archipelago in the South ( Abinales & Amoroso, 2005: 10). It has a land area of 114, 672 square miles and stretches almost 1, 150 miles. Its capital is Manila...
2 Pages(500 words)Essay

...Causes of Colonialism The colonization of the Western hemisphere by different countries started as early as the 11th century with the influx of Catholic Spain and Portugal into the region. An analysis of the whole colonial process in the region indicates that the two main reasons for the colonization of the Western hemisphere were economic and religious reason. Though there existed other factors like culture in the colonization process, economic and religious reasons pushed the major colonizers to acquire lands in the New World (Mignolo and Ennis, 2001). For example, research states that Spain was one of the first countries to look for colonies and was in it purely for the economic...
2 Pages(500 words)Essay

... Colonialism Question Scripts entail colonialism, democracy, and globalization in the Middle East. Some countries in the Middle East find it difficult in reciting the scripts because of post-colonial practices, which have undermined the civil society’s notion. These practices have created geographical and economic scripts that people in the decolonized countries cannot recite. Some interests that differ from national interests, i.e. the industrialized interest makes it hard to recite the scripts. Three key forces, i.e. direct colonization, defensive modernization and imperialism have adversely affected the sovereignty, as well as, the self-determination amongst people in the Middle East. These forces have prevented the region... from...
1 Pages(250 words)Essay

...Introduction The Catholic Church has a long history of existence. Church services and s such as priesthood are highly respected. To qualify for the Catholic priesthood, one has to go through a thorough training on matters of the Catholic faith and Christian mannerisms. When people go out for studies in other countries, they experience many changes; for instance, in the way they associate with others, speak and the mode of lifestyle. In most cases, some people lose their homegrown lifestyles and culture when they go for studies in other countries. Jose Rizal is among the people who made Philippines history in the intellectual arena. Rizal was gifted in numerous field and participated in hundreds of learning activities...
4 Pages(1000 words)Essay

Contracting Colonialism On The Example Of Philippines

...﻿Contracting Colonialism On The Example Of Philippines Introduction The syncretic religion of the Philippines often finds itself on the wrong end to elucidate the selected aspects of truth. In his book Contracting Colonialism: Translation and Christian Conversion in Tagalog Society under Early Spanish Rule Vincente Rafael clarifies this misapprehension with amalgamation of historical facts combined with powerful perception. In this book, Rafael provides good stuff for thinking and succeeds in giving a strong reason for Spain’s ‘sweeping conversion’ of the Tagalog tribe of the Philippines. The book...
6 Pages(1500 words)Book Report/Review
sponsored ads
Save Your Time for More Important Things
Let us write or edit the research proposal on your topic "Assessment of the Overall Impact of Colonialism in the Philippines" with a personal 20% discount.
GRAB THE BEST PAPER

Let us find you another Research Proposal on topic Assessment of the Overall Impact of Colonialism in the Philippines for FREE!