War is not Beneficial to the World - Term Paper Example

Comments (1)
Add to wishlistDelete from wishlist
Cite this document
Summary
In this paper, the author demonstrates why the war on Afghanistan and Iraq has cost the United States a lot of money which amounts to trillions of dollars. And also the author considers all the losses in terms of lives, money, and destruction of property due to war…
Download full paperFile format: .doc, available for editing
HIDE THIS PAPERGRAB THE BEST PAPER97.4% of users find it useful 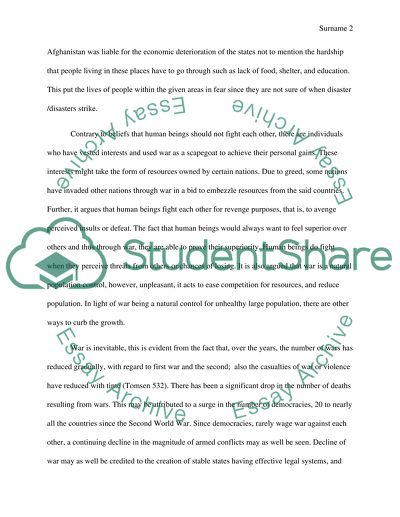 Extract of sample "War is not Beneficial to the World"

Download file to see previous pages Contrary to beliefs that human beings should not fight each other, there are individuals who have vested interests and used war as a scapegoat to achieve their personal gains. These interests might take the form of resources owned by certain nations. Due to greed, some nations have invaded other nations through war in a bid to embezzle resources from the said countries. Further, it argues that human beings fight each other for revenge purposes, that is, to avenge perceived insults or defeat. The fact that human beings would always want to feel superior over others and thus through war, they are able to prove their superiority. Human beings do fight when they perceive threats from others or chances of losing. It is also argued that war is a natural population control, however, unpleasant, it acts to ease competition for resources, and reduce population. In light of war being a natural control for unhealthy large population, there are other ways to curb the growth.
War is inevitable, this is evident from the fact that, over the years, the number of wars has reduced gradually, with regard to first war and the second;  also the casualties of war or violence have reduced with time (Tomsen 532). There has been a significant drop in the number of deaths resulting from wars. This may be attributed to a surge in the number of democracies, 20 to nearly all the countries since the Second World War. Since democracies, rarely wage war against each other, a continuing decline in the magnitude of armed conflicts may as well be seen. Decline of war may as well be credited to the creation of stable states having effective legal systems, and police forces, which eliminates the endless feuding that plagued tribal societies. Increased life expectancy makes people less willing to risk their lives by engaging in violence. Also as a result of globalization and communication, people have ended up being interdependent on each other.
On the other hand, war may not be inevitable this is because human beings have always fought in wars and always will due to the fact that human beings are innately aggressive. ...Download file to see next pagesRead More
Share:
Tags
Cite this document
(“Essay against the Concept of War Example | Topics and Well Written Essays - 2500 words”, n.d.)
Retrieved from https://studentshare.org/history/1402324-essay-against-the-concept-of-war

ge
gerholdjoey added comment 1 year ago
Student rated this paper as
I didn’t know how to start my document. "War is not Beneficial to the World" helped me out a lot! Especially the list of content was valuable.

CHECK THESE SAMPLES OF War is not Beneficial to the World

As it is popularly known in this time, the name Mark Twa...
12 Pages(3000 words)Book Report/Review

On the other hand, these globalization standards are opposed by some critics and argue that globalization does not have to be a requirement for putting up a business in other countries, thus it is just a choice for entering a foreign market. Accordingly, standardization is applicable specifically to high-end markets and with accord to the market segmentation such as the trends that the young people patronize (Mullman, 2006) Regardless of the idea that globalization is mostly based on how the company standardizes the products, the home country still holds the profitability of the business as the economy affects how the foreign investors and other national sources back up the business (Stiglitz, 2006).
Making the world flat mak...
9 Pages(2250 words)Assignment
sponsored ads
Save Your Time for More Important Things
Let us write or edit the term paper on your topic "War is not Beneficial to the World" with a personal 20% discount.
GRAB THE BEST PAPER

Let us find you another Term Paper on topic War is not Beneficial to the World for FREE!