Comments (0)
Add to wishlistDelete from wishlist
Cite this document
Summary
The article that has been chosen for discussion is "Chronic Pain and Its Impact on Quality of Life in Adolescents and Their Families" by Hunfeld, Perkin, Duivenvoorden et al published in Journal of Pediatric Psychology. This particular study evaluated the impact of chronic pain, which is not related to somatic pain, on the quality of life of adolescents and their families…
Download full paperFile format: .doc, available for editing
HIDE THIS PAPERGRAB THE BEST PAPER91% of users find it useful 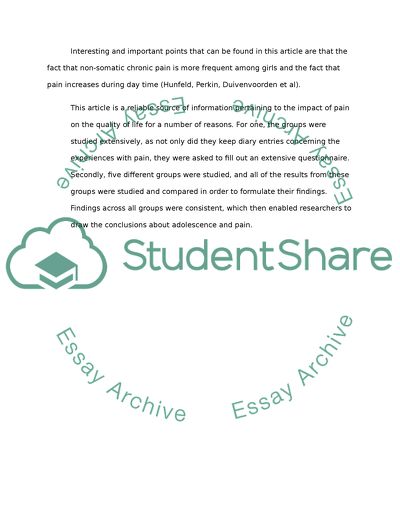 Extract of sample "Pain and its effects on quality of life"

The article that has been chosen for discussion is "Chronic Pain and Its Impact on Quality of Life in Adolescents and Their Families" by Hunfeld, Perkin, Duivenvoorden et al published in Journal of Pediatric Psychology. This particular study evaluated the impact of chronic pain, which is not related to somatic pain, on the quality of life of adolescents and their families. The study was performed on adolescence between 12- 18 years of age who suffered from chronic pain. The method of research that was employed in order to gather the necessary information was an assessment that was done by asking them to maintain a diary and complete a questionnaire on quality of life. According to the article, data was compiled from five major pain clinics, and the pain that these adolescence were contending with was noncancerous in origin. These individuals experienced pain in their backs, muscles, and they had chronic headaches (Hunfeld, Perkin, Duivenvoorden et al, 2001). The information that was gathered from their answers to the questionnaire that was given to them, and from the diary entries that they kept was in line with the main hypothesis that chronic pain has a negative impact on the quality of life in terms of psychological functioning, physical status and functional status. Chronic pain also has an impact on family life and social life.
From this study, it is evident that the most prevalent pains amongst youngsters are limb pain, headache, abdominal, and back pain. The pain mainly increases during day time and subsides after sleep. The highest intensity of pain occurs during night time. When a person has pain and then the pain worsens, this is referred to as breakthrough pain (Hunfeld, Perkin, Duivenvoorden et al, 2001). This is the type of pain experienced by all groups who participated in the study.
Interesting and important points that can be found in this article are that the fact that non-somatic chronic pain is more frequent among girls and the fact that pain increases during day time (Hunfeld, Perkin, Duivenvoorden et al).
This article is a reliable source of information pertaining to the impact of pain on the quality of life for a number of reasons. For one, the groups were studied extensively, as not only did they keep diary entries concerning the experiences with pain, they were asked to fill out an extensive questionnaire. Secondly, five different groups were studied, and all of the results from these groups were studied and compared in order to formulate their findings. Findings across all groups were consistent, which then enabled researchers to draw the conclusions about adolescence and pain.
References
Hunfeld, J.A.M., Perquin, C.W., Duivenvoorden, H.J. et al (2001). Chronic Pain and Its Impact on Quality of Life in Adolescents and Their Families. Journal of Pediatric Psychology, 26(3) 145-153. Read More
Share:
Tags
Cite this document
(“Pain and its effects on quality of life Book Report/Review”, n.d.)
Pain and its effects on quality of life Book Report/Review. Retrieved from https://studentshare.org/health-sciences-medicine/1518820-pain-and-its-effects-on-quality-of-life

“Pain and Its Effects on Quality of Life Book Report/Review”, n.d. https://studentshare.org/health-sciences-medicine/1518820-pain-and-its-effects-on-quality-of-life.
Comments (0)
Click to create a comment or rate a document

... to the right subjects and experience. Thus, it is the secondary and trade school education that will influence the capacity of Morocco to provide the workforce for its hospitality sector. Language remains a major problem, because English and not French or Arabic is the truly international language. Thus, emphasis on English teaching is important for secondary schools that will provide the workers who must effectively interact with tourists from all over the world and not just France or the Arab world, to deliver quality service. 17 17 A shortage of trade schools in the country that will take students who have completed secondary schools to train them for careers in hospitality and tourism was a cause for concern. Although the government...
15 Pages(3750 words)Research Proposal

Given the emergent nature of online commerce, it is a tough task for retailers to develop a website that meets all expectations from consumers. This view is supported by a survey conducted by the UK’s largest e-consultancy Cap Gemini. The survey identified several key disadvantages for online shoppers. Some of these include “’ Availability’, ‘Can’t be in to receive delivery’, ‘Premium charged for delivery’, ‘Can’t see or feel the merchandise’, etc.” (Quader & Quader, 2008) These are not trivial complaints by any means and despite the e-retailing industry setting foot into its third decade in existence, there are no satisfactory solutions found for th...
6 Pages(1500 words)Literature review
sponsored ads
Save Your Time for More Important Things
Let us write or edit the book report/review on your topic "Pain and its effects on quality of life" with a personal 20% discount.
GRAB THE BEST PAPER

Let us find you another Book Report/Review on topic Pain and its effects on quality of life for FREE!