Comments (0)
Add to wishlistDelete from wishlist
Cite this document
Summary
Date Over oxygenation in Emergency Medical Services Oxygen has been a vital component of providing emergency medical services and other health-related treatment. In fact, oxygen is considered as a drug that can ease complications from hypoxia – a life threatening condition; thus, it is necessary that emergency medical providers have knowledge about oxygen administration and treatment…
Download full paperFile format: .doc, available for editing
HIDE THIS PAPERGRAB THE BEST PAPER97% of users find it useful 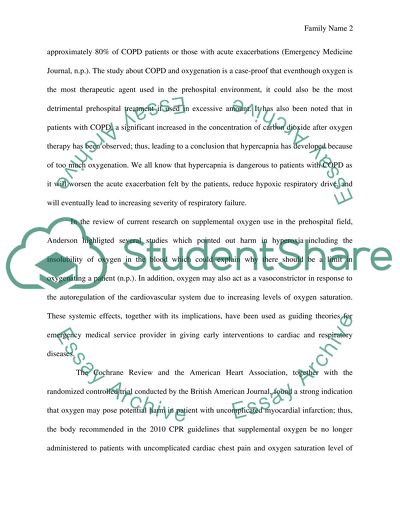 Extract of sample "Over oxygenation in EMS (Emergency Medical Services)"

Download file to see previous pages However, just like any other medications, too much of something is bad for the body; the same goes for oxygen. Even if it ease a number of diseases, studies revealed that too much oxygen might lead to a condition known as hyperoxia. Therefore, this paper hypothesized that there is significant harm in over administration of oxygen in patients receiving emergency medical services. To support the hypothesis, a number of studies involving over oxygenation were noted in this paper; among of which include those from the Emergency Medicine Journal. According to this study, several guidelines and prehospital textbooks advocate and emphasize the use of low oxygen therapy in treating patients with chronic obstructive pulmonary diseases (COPD); however, the study found out the reality that ambulance crews are still over oxygenating approximately 80% of COPD patients or those with acute exacerbations (Emergency Medicine Journal, n.p.). The study about COPD and oxygenation is a case-proof that eventhough oxygen is the most therapeutic agent used in the prehospital environment, it could also be the most detrimental prehospital treatment if used in excessive amount. It has also been noted that in patients with COPD, a significant increased in the concentration of carbon dioxide after oxygen therapy has been observed; thus, leading to a conclusion that hypercapnia has developed because of too much oxygenation. We all know that hypercapnia is dangerous to patients with COPD as it will worsen the acute exacerbation felt by the patients, reduce hypoxic respiratory drive, and will eventually lead to increasing severity of respiratory failure. In the review of current research on supplemental oxygen use in the prehospital field, Anderson highligted several studies which pointed out harm in hyperoxia including the insolubility of oxygen in the blood which could explain why there should be a limit in oxygenating a patient (n.p.). In addition, oxygen may also act as a vasoconstrictor in response to the autoregulation of the cardiovascular system due to increasing levels of oxygen saturation. These systemic effects, together with its implications, have been used as guiding theories for emergency medical service provider in giving early interventions to cardiac and respiratory diseases. The Cochrane Review and the American Heart Association, together with the randomized controlled trial conducted by the British American Journal, found a strong indication that oxygen may pose potential harm in patient with uncomplicated myocardial infarction; thus, the body recommended in the 2010 CPR guidelines that supplemental oxygen be no longer administered to patients with uncomplicated cardiac chest pain and oxygen saturation level of more than 94% (Anderson, n.p.). Likewise, another review pointed out that administration of supplemental oxygen to patients with cardiac arrest could be more detrimental due to the increasing mortality of experiencing cardiac arrest. An alarming findings of the review pointed out the same result from the Emergency Medicine Journal. In the review, it has been found that emergency medical services providers often administered high-flow supplemental oxygen in patients with exacerbation of COPD. A relative risk of death has resulted to this action as evidenced by the ...Download file to see next pagesRead More
Share:
Cite this document
(“Over oxygenation in EMS (Emergency Medical Services) Research Paper”, n.d.)
Retrieved from https://studentshare.org/health-sciences-medicine/1476699-over-oxygenation-in-ems-emergency-medical-services
(Over Oxygenation in EMS (Emergency Medical Services) Research Paper)
https://studentshare.org/health-sciences-medicine/1476699-over-oxygenation-in-ems-emergency-medical-services.
“Over Oxygenation in EMS (Emergency Medical Services) Research Paper”, n.d. https://studentshare.org/health-sciences-medicine/1476699-over-oxygenation-in-ems-emergency-medical-services.
Comments (0)
Click to create a comment or rate a document

CHECK THESE SAMPLES OF Over oxygenation in EMS (Emergency Medical Services)

In a competitive industry inundated with corporate cleaning giants, ITT has managed to capture the attention of the busy London consumer, appealing to human psychology as a means to promote convenience as priority number one.

ITT appears to understand the consumer profile, perhaps drawing on Abraham Maslow’s renowned theory of human motivation, so as to appeal to their physiological needs for stress reduction when attempting to juggle business, family, and the responsibilities of household maintenance. Unlike their competitors, which routinely focus on value-driven strategies and product upgrades through R & D investments, ITT has found a connection by sympathizing with the hectic consumer and providing...
12 Pages(3000 words)Case Study

The Role of Web Services in E-Commerce

Web services share business logic, data, and processes through a programmatic interface across a network (Kaye, 2003).

This becomes a platform for business that takes place across the internet in ways that were previously unimagined. E-commerce is much like regular commerce except that the markets have expanded and the competition has become global instead of local or even regional. Web services allow people from across the world to engage in business and the few barriers which remain for truly global commerce are being removed with automated language translators and website optimization techniques that allow users from different locations to view the web as they prefer to view it. All of these developments are takin...

The federal government, through the 2009’s Controlled Substances Act, makes the use of marijuana a criminal offense. However, various states, such as Arizona, Colorado, and California, have legalized the use of cannabis for therapeutic purposes. This paper presents an argument that marijuana should be made legal for its therapeutic uses.
The legalization of medical cannabis is justified because of the positive therapeutic effects of the drug. Proponents of the legalization of medical cannabis argue that if marijuana is made illegal, patients will not be able to access and use it for the relief of their symptoms (Gwynne 29). Marijuana has been reported to be a safe drug for the treatment of various conditions. The drug a...
6 Pages(1500 words)Case Study
sponsored ads
Save Your Time for More Important Things
Let us write or edit the research paper on your topic "Over oxygenation in EMS (Emergency Medical Services)" with a personal 20% discount.
GRAB THE BEST PAPER

Let us find you another Research Paper on topic Over oxygenation in EMS (Emergency Medical Services) for FREE!