Comments (0)
Add to wishlistDelete from wishlist
Cite this document
Summary
This research paper "Opioid Misuse and Availability in North America" attempts to explore its origin in the US, the use of opioid in pain management, sources of problems, clinical issues and societal costs of treatment. Opioid abuse has assumed a menacing proportion in the US for quite some time…
Download full paperFile format: .doc, available for editing
HIDE THIS PAPERGRAB THE BEST PAPER98.7% of users find it useful 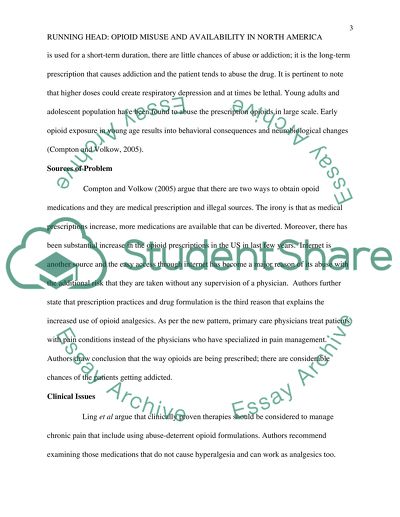 Extract of sample "Opioid Misuse and Availability in North America"

Download file to see previous pages Compton and Volkow (2005) argue that opioids have been the most abused drugs among secondary students. There has been the considerable increase in opioid medications in the US in last few years and that has posed several questions. In a recent epidemiological study, it was reported that in 2002, almost 12 million people in the US were involved in opioid medication abuse. This is quite worrisome because, in 1990, there were only 628,000 cases of opioid abuse indicating a huge upsurge in the opioid abuse cases. Fischer et al (2008) argue that somehow the US is at the forefront of consumption of PO analgesics followed by Belgium and Canada. Between 1997 and 2002, the increase in PO consumption in its varied forms e.g. fentanyl: +214%, oxycodone: +383%, and morphine: +67% were reported. Use in Pain Management Opioids are prescribed in cases of acute pain for brief periods; however, in the treatment of chronic pains, it is prescribed for a longer duration. Usually, in acute pain conditions when it is used for a short-term duration, there are little chances of abuse or addiction; it is the long-term prescription that causes addiction and the patient tends to abuse the drug. It is pertinent to note that higher doses could create respiratory depression and at times be lethal. Young adults and adolescent population have been found to abuse the prescription opioids in large scale. Early opioid exposure in young age results into behavioral consequences and neurobiological changes (Compton and Volkow, 2005). Sources of Problem Compton and Volkow (2005) argue that there are two ways to obtain opioid medications and they are medical prescription and illegal sources. The irony is that as medical prescriptions increase, more medications are available that can be diverted. Moreover, there has been a substantial increase in the opioid prescriptions in the US in last few years. The Internet is another source and the easy access through the internet has become a major reason for its abuse with the additional risk that they are taken without any supervision of a physician. Authors further state that prescription practices and drug formulation is the third reason that explains the increased use of opioid analgesics. As per the new pattern, primary care physicians treat patients with pain conditions instead of the physicians who have specialized in pain management. Authors draw the conclusion that the way opioids are being prescribed; there are considerable chances of the patients getting addicted. Clinical Issues Ling et al argue that clinically proven therapies should be considered to manage chronic pain that includes using abuse-deterrent opioid formulations. Authors recommend examining those medications that do not cause hyperalgesia and can work as analgesics too. Even medications that can reverse opioid-induced hyperalgesia (OIH) can be considered. In this line, partial agonist buprenorphine or similar non-pharmacological treatments with an increased level of clinical supervision can be considered. Buprenorphine also acts as anti-hyperalgesia and that is where it seems to be a promising substitute for the opioids. Genetic disposition is also said to be behind opioid addiction but genetic research is still in its nascent stage to provide a solution to the issue. ...Download file to see next pagesRead More
Share:
Tags
Cite this document
(“Opioid Misuse and Availability in North America Research Paper”, n.d.)
Retrieved from https://studentshare.org/health-sciences-medicine/1462683-opioid-misuse-and-availability-in-north-america
(Opioid Misuse and Availability in North America Research Paper)
https://studentshare.org/health-sciences-medicine/1462683-opioid-misuse-and-availability-in-north-america.
“Opioid Misuse and Availability in North America Research Paper”, n.d. https://studentshare.org/health-sciences-medicine/1462683-opioid-misuse-and-availability-in-north-america.
Comments (0)
Click to create a comment or rate a document

CHECK THESE SAMPLES OF Opioid Misuse and Availability in North America

Smoking is associated to harm secondary smokers than real smokers and this is the reason many nations including America have implemented bans on smoking as a move to protect non-smokers from the associated harms from smokers and also reduce the prevalence of smoking (John, pg35). This has greatly contributed to controlling public smoking. The smoking prevalence decreased to 18.9% up from 24.4% in adults with the age of 18-24 from the year 2005 to the year 2011, in accordance with a research Centre (CDC). The age group is now among the ones with the lowest prevalence in smoking of age below 65. It was six years back; the group was highest in the smoking number. In America, apart from burning smoking in some public places, the moves...
6 Pages(1500 words)Case Study
sponsored ads
Save Your Time for More Important Things
Let us write or edit the research paper on your topic "Opioid Misuse and Availability in North America" with a personal 20% discount.
GRAB THE BEST PAPER

Let us find you another Research Paper on topic Opioid Misuse and Availability in North America for FREE!