Anatomy and phisiology of the circulatory system - Research Paper Example 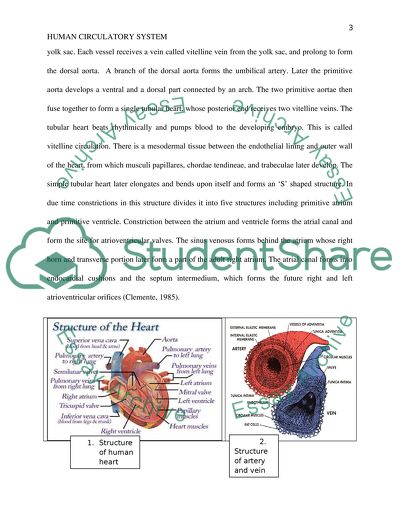 Extract of sample "Anatomy and phisiology of the circulatory system"

Download file to see previous pages The amazing function of the heart is to pump blood though these 60,000 miles; blood which carries essential nutrients, hormones and oxygen to some 3 trillion cells of the body. The exchange of nutrients and wastes between blood and the cells occur at the capillaries. The human cardiovascular system is a closed system, which gets narrower as the vessels reach the cells and finally widens as the vessels reach the heart. Such a system allows a large surface area for exchange of nutrients and gases at the cell-capillary interface. Blood circulation is so important for the body that if the heart stops beating even for a few minutes, it can be fatal. The heart beats for an average 100,000 times a day pumping about 2000 gallons of blood per day throughout the body. It pumps the entire blood volume of an adult body of 5.6 liters for three times in a minute. Anatomically, heart is made up of cardiac muscles and consists of four chambers, separated by valves. The blood vessels are made up elastin membranes and smooth muscle cells (Clemente, 1985). The lymph node is the main functional unit of the lymphatic system. Here the immune system is primed and most of the immune cells are activated to fight the foreign substances in the body. The rudimentary heart is a pair of tubular vessels, the primitive aortae, and develops in the space of the pericardial area. These then develop a direct connection with the vessels of the yolk sac. Each vessel receives a vein called vitelline vein from the yolk sac, and prolong to form the dorsal aorta. A branch of the dorsal aorta forms the umbilical artery. Later the primitive aorta develops a ventral and a dorsal part connected by an arch. The two primitive aortae then fuse together to form a single tubular heart, whose posterior end receives two vitelline veins. The tubular heart beats rhythmically and pumps blood to the developing embryo. This is called vitelline circulation. There is a mesodermal tissue between the endothelial lining and outer wall of the heart, from which musculi papillares, chordae tendineae, and trabeculae later develop. The simple tubular heart later elongates and bends upon itself and forms an ‘S’ shaped structure. In due time constrictions in this structure divides it into five structures including primitive atrium and primitive ventricle. Constriction between the atrium and ventricle forms the atrial canal and form the site for atrioventricular valves. The sinus venosus forms behind the atrium whose right horn and transverse portion later form a part of the adult right atrium. The atrial canal forms into endocardial cushions and the septum intermedium, which forms the future right and left atrioventricular orifices (Clemente, 1985). Figure 1. Structure of human heart, and blood vessels. Sources: 1. http://kardiol.com/?p=4 2. http://www.accessexcellence.org/AE/AEC/CC/heart_anatomy.php The heart and the great vessels are contained in a conical fibro-serous sac, between the lungs. The heart is a hollow and muscular organ. It measures 12 cm in length and 8-9 cm in width, and weighs around 280 grams. It is divided into four chambers, the upper two are called left and right atrium, while the bottom two are called left and right ventricle. The atria are separated from ventricles by the coronary sulcus and the interatrial groove separates the two atria. Anterior longitudinal sulcus and the posterior longitudina ...Download file to see next pagesRead More
Share:
Tags
Cite this document
(“Anatomy and phisiology of the circulatory system Research Paper”, n.d.)
Retrieved from https://studentshare.org/health-sciences-medicine/1459678-anatomy-and-phisiology-of-the-circulatory-system
(Anatomy and Phisiology of the Circulatory System Research Paper)
https://studentshare.org/health-sciences-medicine/1459678-anatomy-and-phisiology-of-the-circulatory-system.
“Anatomy and Phisiology of the Circulatory System Research Paper”, n.d. https://studentshare.org/health-sciences-medicine/1459678-anatomy-and-phisiology-of-the-circulatory-system.
Comments (0)
Click to create a comment or rate a document

CHECK THESE SAMPLES OF Anatomy and phisiology of the circulatory system

In order to compare the welfare system of the three proposed countries, it is important to first develop a comparative method that would guide in comparing the three states. For the purpose of this paper, a binary comparison would be conducted. The implicit comparison would deal with Britain while the explicit comparison would explore the USA and Canada. Thereby a small N’ study would be used, that is, of three countries.
The three countries selected to share a similarity in the form that these countries are a welfare state. This is when welfare is mainly funded by the state. While the USA and Canada focus on the liberal welfare state, the welfare state of the UK is not quite defined.
The comparison of the welfare...
8 Pages(2000 words)Term Paper
sponsored ads
Save Your Time for More Important Things
Let us write or edit the research paper on your topic "Anatomy and phisiology of the circulatory system" with a personal 20% discount.
GRAB THE BEST PAPER

Let us find you another Research Paper on topic Anatomy and phisiology of the circulatory system for FREE!