Comments (0)
Add to wishlistDelete from wishlist
Cite this document
Summary
This essay will analyze factors that makes drug addiction to be more of a medically oriented problem that a psychological problem. The essay will also instigate different aspects of addiction such as signs as addiction and symptoms. …
Download full paperFile format: .doc, available for editing
HIDE THIS PAPERGRAB THE BEST PAPER94.6% of users find it useful 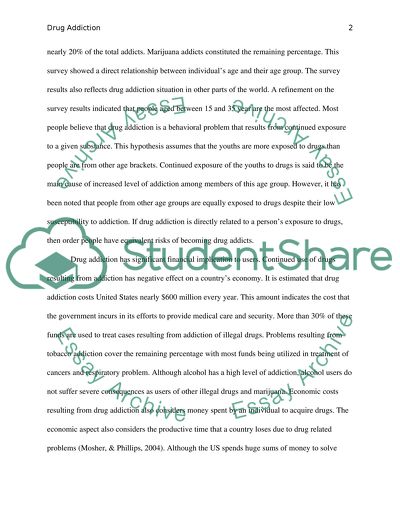 Download file to see previous pages Most people believe that drug addiction is a behavioral problem that results from continued exposure to a given substance. This hypothesis assumes that the youths are more exposed to drugs than people are from other age brackets. Continued exposure of the youths to drugs is said to be the main cause of increased level of addiction among members of this age group. However, it has been noted that people from other age groups are equally exposed to drugs despite their low susceptibility to addiction. If drug addiction is directly related to a person’s exposure to drugs, then order people have equivalent risks of becoming drug addicts. Drug addiction has significant financial implication to users. Continued use of drugs resulting from addiction has negative effect on a country’s economy. It is estimated that drug addiction costs United States nearly $600 million every year. This amount indicates the cost that the government incurs in its efforts to provide medical care and security. More than 30% of these funds are used to treat cases resulting from addiction of illegal drugs. Problems resulting from tobacco addiction cover the remaining percentage with most funds being utilized in treatment of cancers and respiratory problem. Although alcohol has a high level of addiction, alcohol users do not suffer severe consequences as users of other illegal drugs and marijuana. Economic costs resulting from drug addiction also considers money spent by an individual to acquire drugs. The economic aspect also considers the productive time that a country loses due to drug related problems (Mosher, & Phillips, 2004). Although the US spends huge sums of money to solve drug related problems, the amount spent is proportional to the...
This paper shows that drug addiction is a state whereby, drug users become intoxicated due to repeated use of a certain substance. Drug addiction results into substance dependence whereby resisting the desire to take a given drug become irresistible for the users. Addiction also creates the desire to increase dose among users. Drug addicts can even compromise their lives to obtain their drug. Addiction depends on an individual physiology and not exposure to drugs or formation of behavior.
Drug addiction has significant financial implication to users. Continued use of drugs resulting from addiction has negative effect on a country’s economy.
Drug addiction is a long-term problem and, therefore its effects on person’s body are cumulative. Symptoms resulting from drug addiction depend on the type of drug that a person consumes. However, there are general symptoms and signs that are exhibited by users of most drugs. The symptoms also depend on the age and health of an addict. The main symptom of drug addiction is increased craving for the substance. This involves continued and excessive use of the drug. Increasing dosage and frequency of drug addiction are some indicators of increased craving for the substance. Lack of concentration is the second symptoms that most drag addicts show. Drug addicts lack concentration due to their increased desire to consume the substance.
Drug addiction not only causes problems to the users, but also the entire society. Currently most problems affecting the society are related to problem of continued use of drugs or drug addiction.
If drug addiction was a behavioral problem then people are likely to respond to warnings or acquire positive behaviors.
...Download file to see next pagesRead More
Share:
Tags
Cite this document
(“Drug Addiction Research Paper Example | Topics and Well Written Essays - 1750 words”, n.d.)
Retrieved from https://studentshare.org/health-sciences-medicine/1448029-drug-addiction

CHECK THESE SAMPLES OF Drug Addiction

The above equation is a natural exponential equatio...
6 Pages(1500 words)Assignment

One of the problems that prisons face is overcrowding populations hence there is a need to find alternatives. In most cases, it is the petty offenders who constitute a bigger percentage of the overcrowded populations. Thus, this technical report presents some of the alternatives to reduce populations in the US prison. Much attention is drawn on petty drug offenders who may be locked up in prison facilities though there are some places they can be taken to like. Existing data shows that the ratio of serious offenders to petty drug offenders is low thus there is a need to find a solution to these inmates with minor crimes (Carson and Daniela 16). Overcrowding is a real issue since it violates the right of the inmates and has a consi...
6 Pages(1500 words)Term Paper

...is a common problem among abusers of various drugs characterized by a chronic brain disease that makes users constantly crave for drugs and use them despite the harmful effects they pose. An addict cannot stay without using the drugs; whenever the effect is over, they become dysfunctional until they consume the drug or substance. According to the National Institute on Drug Abuse, in 2012, 6.8% of the total population, which is equivalent to 17.7 million Americans were dependent on alcohol. Drug addiction results from taking numerous recreational drugs that induce various feelings of...
6 Pages(1500 words)Essay
sponsored ads
Save Your Time for More Important Things
Let us write or edit the research paper on your topic "Drug Addiction" with a personal 20% discount.
GRAB THE BEST PAPER

Let us find you another Research Paper on topic Drug Addiction for FREE!