Comments (0)
Add to wishlist Delete from wishlist
Cite this document
Summary
The increasing awareness and need to address mental health problems among the aboriginal communities of Canada are quite apparent. A major contributing factor to this increased awareness is the escalating rate of mental illnesses such as anxiety and depression …
Download full paper File format: .doc, available for editing
HIDE THIS PAPERGRAB THE BEST PAPER93.1% of users find it useful 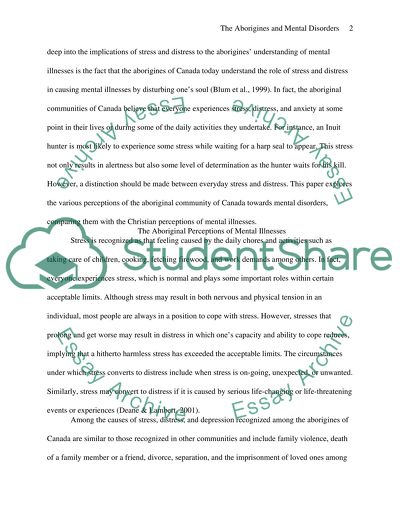 Extract of sample "Aboriginal (Native) Peoples of Canada: there Perspectives on Mental Disorders"

Download file to see previous pages In addition, suicide cases and domestic violence have also been on the rise in the recent past, making the need to address mental health problems an urgent one among the aborigines of Canada. Consequently, they have taken a closer look at and keener considerations of the mental problems facing them, the causes of these problems, and the most appropriate and effective solutions (Blum et al., 1999). In understanding mental health issues among the aborigines of Canada, it is important that the concepts of stress and distress are best understood. The reason for delving deep into the implications of stress and distress to the aborigines’ understanding of mental illnesses is the fact that the aborigines of Canada today understand the role of stress and distress in causing mental illnesses by disturbing one’s soul (Blum et al., 1999). In fact, the aboriginal communities of Canada believe that everyone experiences stress, distress, and anxiety at some point in their lives or during some of the daily activities they undertake. For instance, an Inuit hunter is most likely to experience some stress while waiting for a harp seal to appear. This stress not only results in alertness but also some level of determination as the hunter waits for his kill. However, a distinction should be made between everyday stress and distress. This paper explores the various perceptions of the aboriginal community of Canada towards mental disorders, comparing them with the Christian perceptions of mental illnesses. The Aboriginal Perceptions of Mental Illnesses Stress is recognized as that feeling caused by the daily chores and activities such as taking care of children, cooking, fetching firewood, and work demands among others. In fact, everyone experiences stress, which is normal and plays some important roles within certain acceptable limits. Although stress may result in both nervous and physical tension in an individual, most people are always in a position to cope with stress. However, stresses that prolong and get worse may result in distress in which one’s capacity and ability to cope reduces, implying that a hitherto harmless stress has exceeded the acceptable limits. The circumstances under which stress converts to distress include when stress is on-going, unexpected, or unwanted. Similarly, stress may convert to distress if it is caused by serious life-changing or life-threatening events or experiences (Deane & Lambert, 2001). Among the causes of stress, distress, and depression recognized among the aborigines of Canada are similar to those recognized in other communities and include family violence, death of a family member or a friend, divorce, separation, and the imprisonment of loved ones among others. Therefore, among the aborigines of Canada, the most common problems that are identifiable with mental disorders are family abuse/violence, mental disorders, depression, suicidal tendencies, grief, and lifestyle disruption (Deane & Lambert, 2001). Prior to discussing the Canadian aborigines’ mental health problems, their symptoms, causes, and solutions, it is important that certain questions pertaining to the aborigines’ perceptions of mental illnesses are addressed. The first outstanding feature of the aborigines’ perceptions on mental disorders is that such disorders are not separate from the general aspects and contexts of peoples’ lives. In fact, the aborigines interconnect with mental, physical, psychological, spiritual, and environmental aspects of their ...Download file to see next pages Read More
Share:
Tags
Cite this document
(“Aboriginal (Native) Peoples of Canada: there Perspectives on Mental Research Paper”, n.d.)
Aboriginal (Native) Peoples of Canada: there Perspectives on Mental Research Paper. Retrieved from https://studentshare.org/health-sciences-medicine/1444321-aboriginal-native-peoples-of-canada-there

“Aboriginal (Native) Peoples of Canada: There Perspectives on Mental Research Paper”, n.d. https://studentshare.org/health-sciences-medicine/1444321-aboriginal-native-peoples-of-canada-there.
Comments (0)
Click to create a comment or rate a document

CHECK THESE SAMPLES OF Aboriginal (Native) Peoples of Canada: there Perspectives on Mental Disorders

The study of the comorbidity between disordered eating and substance use in middle and high school samples tended to focus on the association between attitudes toward eating, weight, and shape and tobacco smoking, alcohol drinking, and marijuana use (Field et al., 2002). Nonetheless, several school-based studies have also reported on associations between tobacco smoking, alcohol drinking, and marijuana use in relation to bingeing, purging and dieting behaviors (Lock et al., 2001 and Tomori et al., 2001). However, only a few investigations have included a broader range of substance classes while investigating associations between disordered eating attitudes and behaviors and substance use in school-based studies (Von Ranson et al.,...
10 Pages (2500 words) Assignment

I would first examine whether there is a physical cause for the symptoms by asking the patient the question:
This is relevant, especially in the context of the patient’s schizophrenic history. The paranoid feelings and strange thoughts which the patient describes are characteristic of schizophrenia patients who suffer from delusions and hallucinations. Although the patient states that he has not experienced these particular symptoms before, it must be noted that he is vague about his earlier symptoms for which he was hospitalized; therefore it appears quite likely that he may have experienced the same disorder before. According to Diaz et al (2006), the gene Catechol-O-methyltransferase (COMT) causes the degradation of...
8 Pages (2000 words) Case Study

It seems that nursing care provided in people around the world is not independent of particular socio-economical factors. More specifically, it has been found that the race, the gender, the social class or the age of the patients can influence the perceptions and the behavior of nurses within a specific clinical environment. Regarding this issue it is suggested by Julian (2003) that ‘“ethnicity or culture per se cannot account for inequalities in health; rather, the material disadvantage is the crucial variable; however, it is also clear that eth­nicity and race cannot be reduced to class; as a result, if culture is not taken into account in the formula­tion and implementation of health programs, they are doome...
11 Pages (2750 words) Term Paper

In fact, the word Shawnee comes from the word Shawun which is an Algonquin word that translates to “southerner”. The Shawnee people are known to refer to themselves and their tribe as Shawano or Shawano. This particular language is quite similar to Sank-Fox. The recorded history pertinent to this particular tribe, dos do not begin until around 1670. Anything prior to this is simply not recorded and is unconfirmed by most historians. The Shawnee are thought to have been located originally at the Cumberland basin in Tennessee around this time, with perhaps smaller portions of the tribe living on the Middle Savannah which was located in South Carolina. Interestingly, the tribe was separated into two parts which lived a co...
10 Pages (2500 words) Report

In the current literature, the current criminal justice system has specific ideas of what should be done when an individual commits a crime. As an example, Carvan (1999) poses a question in a case study that is pertinent to the shit study. I...
10 Pages (2500 words) Coursework
sponsored ads
Save Your Time for More Important Things
Let us write or edit the research paper on your topic "Aboriginal (Native) Peoples of Canada: there Perspectives on Mental Disorders" with a personal 20% discount.
GRAB THE BEST PAPER

Let us find you another Research Paper on topic Aboriginal (Native) Peoples of Canada: there Perspectives on Mental Disorders for FREE!