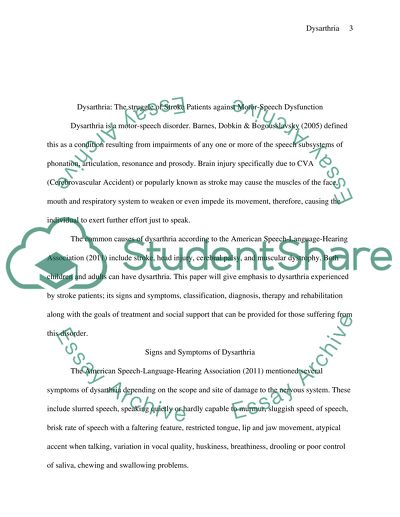 Extract of sample "Dysarthria: the Struggle of Stroke against Motor=Speech Disfunction"

Download file to see previous pages The impact of this disorder to the stroke patient may vary uniquely depending on the extent and severity of the condition along with the modes of rehabilitation and treatment. Dysarthria: The struggle of Stroke Patients against Motor-Speech Dysfunction Dysarthria is a motor-speech disorder. Barnes, Dobkin & Bogousslavsky (2005) defined this as a condition resulting from impairments of any one or more of the speech subsystems of phonation, articulation, resonance and prosody. Brain injury specifically due to CVA (Cerebrovascular Accident) or popularly known as stroke may cause the muscles of the face, mouth and respiratory system to weaken or even impede its movement, therefore, causing the individual to exert further effort just to speak. The common causes of dysarthria according to the American Speech-Language-Hearing Association (2011) include stroke, head injury, cerebral palsy, and muscular dystrophy. Both children and adults can have dysarthria. This paper will give emphasis to dysarthria experienced by stroke patients; its signs and symptoms, classification, diagnosis, therapy and rehabilitation along with the goals of treatment and social support that can be provided for those suffering from this disorder. Signs and Symptoms of Dysarthria The American Speech-Language-Hearing Association (2011) mentioned several symptoms of dysarthria depending on the scope and site of damage to the nervous system. These include slurred speech, speaking quietly or hardly capable to murmur, sluggish speed of speech, brisk rate of speech with a faltering feature, restricted tongue, lip and jaw movement, atypical accent when talking, variation in vocal quality, huskiness, breathiness, drooling or poor control of saliva, chewing and swallowing problems. Classifications of Dysarthria Tanner (2008), along with Barnes, Dobkin & Bogousslavsky (2005) and McNeil (2009) cited several types of dysarthria. These include Spastic, Flaccid, Hypokinetic, Hyperkinetic, Ataxic, Pure or Isolated, Unilateral Upper Motor Neuron and Mixed Dysarthria. Barnes, Dobkin & Bogousslavsky (2005) differentiated the mentioned categories based on speech features and common lesion location. Spastic Dysarthria In this kind of dysarthria, the speech characteristics observed in the patient include vague consonants, monopitch, reduced stress, and harsh vocal quality. Mcneil (2009) also adds that the voice could be weak and unsteady in this type of dysarthria. The usual lesion site illustrates bilateral upper motor neuron pyramidal tract lesions. Flaccid Dysarthria The salient feature of this kind of dysarthria according to Godefroy & Bogousslavsky (2007) is evident hypernasality with nasal emission of air, continuous breathiness during phonation and perceptible inspiration. Lower motor neuron lesions are evident in the brainstem in flaccid dysarthria. Kirshner (2007) mentioned that this type of dysarthria is apparent in any disorders with bilateral lesions involving the corticobulbar tracts; frequently, seen in bilateral stroke. Hypokinetic Dysarthria This variety is typically seen in patients with Parkinson’s disease; however, strokes affecting the basal ganglia may emulate this type. McNeil (2009) stressed that due to imprecise consonant articulation; intelligibility deficits may occur or may be present in this dysarthria type. In addition, Godefroy and ...Download file to see next pagesRead More
Share:
Tags
Cite this document
(“Dysarthria: the Struggle of Stroke against Motor=Speech Disfunction Research Paper”, n.d.)
Retrieved from https://studentshare.org/health-sciences-medicine/1432163-dysarthriaa-motor-speech-disorder-in-stroke
(Dysarthria: The Struggle of Stroke Against Motor=Speech Disfunction Research Paper)
https://studentshare.org/health-sciences-medicine/1432163-dysarthriaa-motor-speech-disorder-in-stroke.
“Dysarthria: The Struggle of Stroke Against Motor=Speech Disfunction Research Paper”, n.d. https://studentshare.org/health-sciences-medicine/1432163-dysarthriaa-motor-speech-disorder-in-stroke.
Comments (0)
Click to create a comment or rate a document

CHECK THESE SAMPLES OF Dysarthria: the Struggle of Stroke against Motor=Speech Disfunction

Initial therapy is without the use of DAF, where the stutterer is trained to use a s...
7 Pages(1750 words)Term Paper

Appealing against the Refusal of the County Court

It is obvious from the stated facts that she was aware at all times during the time of the design, construction and the building process itself and the objections raised by her at the time of invoice are absolutely belated. At this juncture, her refusal to pay for the construction, therefore, seems to be a breach of contract.

However, the regulation covers an important aspect of human values since it is concerned with the safety of wild animals and the risks posed to it by the construction of a pool with unsafe parameters. If the sole criterion of this concern for wildlife safety is considered it becomes difficult to associate it with either the location of the pool within an urban or rural area and Samantha’s con...
6 Pages(1500 words)Assignment

According to the World Health Organization, stroke is a condition that occurs due to the interruption of the supply of blood to the brain. It usually occurs as a result of blood vessels bursting or blocking by a clot. It can be termed as a cerebral vascular disorder as it affects the brain and the blood vessels. Its effects result in the death of the area in the brain tissue (WHO, 2008).
Stroke is one of the leading deaths in developed countries. In Australia, stroke is the most second cause of death. Nearly sixty thousand strokes occur every year. As metabolic and cardiovascular diseases incidence increase with age, older people are likely to experience strokes. Age forms, the most&...
6 Pages(1500 words)Assignment
sponsored ads
Save Your Time for More Important Things
Let us write or edit the research paper on your topic "Dysarthria: the Struggle of Stroke against Motor=Speech Disfunction" with a personal 20% discount.
GRAB THE BEST PAPER

Let us find you another Research Paper on topic Dysarthria: the Struggle of Stroke against Motor=Speech Disfunction for FREE!