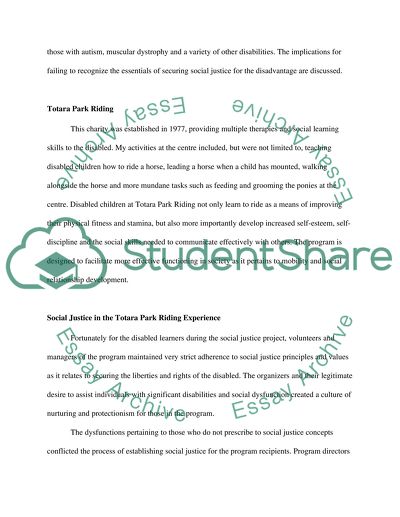 Download file to see previous pages Flynn (1995) supports this viewpoint, offering that social justice ensures political, economic, and social equality; an unalienable promise of civil human morality and ethics. Not all in society, however, prescribe to the social contract, believing that rights guarantees are not necessarily applicable to all members of society in certain scenarios. There are those who argue in favor of utilitarianism, using teleological value systems that counter individualized rights security when the outcome is ensuring utility for the broader social population. Those who do not prescribe to the social contract and securing liberties of all citizens conflict the process of establishing social justice for all members in society. No more apparent is this confliction than with the disadvantaged in society, those who maintain medical and cognitive disabilities and require special consideration. This narrative will describe a personal experience in a social justice project consisting of work at the Totara Park Riding for the Disabled, a charitable program maintaining therapeutic, cognitive, social and physical health imperatives for those with autism, muscular dystrophy and a variety of other disabilities. The implications for failing to recognize the essentials of securing social justice for the disadvantage are discussed. Totara Park Riding This charity was established in 1977, providing multiple therapies and social learning skills to the disabled. My activities at the centre included, but were not limited to, teaching disabled children how to ride a horse, leading a horse when a child has mounted, walking alongside the horse and more mundane tasks such as feeding and grooming the ponies at the centre. Disabled children at Totara Park Riding not only learn to ride as a means of improving their physical fitness and stamina, but also more importantly develop increased self-esteem, self-discipline and the social skills needed to communicate effectively with others. The program is designed to facilitate more effective functioning in society as it pertains to mobility and social relationship development. Social Justice in the Totara Park Riding Experience Fortunately for the disabled learners during the social justice project, volunteers and managers of the program maintained very strict adherence to social justice principles and values as it relates to securing the liberties and rights of the disabled. The organizers and their legitimate desire to assist individuals with significant disabilities and social dysfunction created a culture of nurturing and protectionism for those in the program. The dysfunctions pertaining to those who do not prescribe to social justice concepts conflicted the process of establishing social justice for the program recipients. Program directors and volunteers were greatly concerned about the stereotypes and prejudices in society that exist as it relates to those with severe cognitive and physical disabilities. Because the broad majority of these individuals maintained disabilities that required mentoring or routine clinical assistance, political actors in society and those with more teleological viewpoints considered the disabled to be significant risks to society when attempting to establish independence and non-governance in their lifestyles. Thus, the program maint ...Download file to see next pages Read More
Share:
Tags
Cite this document
(“Social Justice Term Paper Example | Topics and Well Written Essays - 2500 words”, n.d.)
Retrieved from https://studentshare.org/health-sciences-medicine/1401299-social-justice

CHECK THESE SAMPLES OF Social Justice

They are on trial and will be dealt with fairly. These laws ensure that no one, even if he or she has committed a crime is abused or punished cruelly.
Following the history of civilization like in china, we see the traces of systems for Criminal justice in order to provide safety for the citizens. Evolving through the years laws have been modified and changed to form the system that we know today.
From its start, the “U.S. criminal justice system” has advocated the idea of “checks and balances”. To avoid dictatorial rule, the people who founded this system in such a way that one person was not given control or authority completely to punish the criminals. The idea of assigning a ‘jury...
6 Pages (1500 words) Assignment
sponsored ads
Save Your Time for More Important Things
Let us write or edit the term paper on your topic "Social Justice" with a personal 20% discount.
GRAB THE BEST PAPER

Let us find you another Term Paper on topic Social Justice for FREE!