Comments (0)
Add to wishlistDelete from wishlist
Cite this document
Summary
This kind of migration is mainly caused by both pull and push factors. According to the Migration Policy Centre, “An estimated 9 million Syrians have fled their…
Download full paperFile format: .doc, available for editing
HIDE THIS PAPERGRAB THE BEST PAPER93.9% of users find it useful 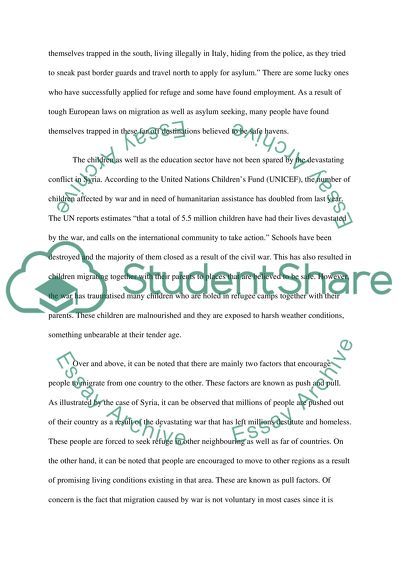 Extract of sample "Push and pull factors in Syrian migration"

Since the outbreak of a civil war in Syria in it has been d that the rate of migration has also escalated. This kind of migration is mainlycaused by both pull and push factors. According to the Migration Policy Centre, “An estimated 9 million Syrians have fled their homes since the outbreak of civil war in March 2011, taking refuge in neighbouring countries or within Syria itself.” The United Nations High Commissioner for Refugees (UNHCR) reports that about 2.5 million Syrians have fled to neighbouring countries such as Turkey, Lebanon, Jordan and Iraq. About 100 000 refugees have also managed to get asylum in European countries. David Williams also concurs with this by stating that “An average of almost 5,000 Syrians are fleeing into neighbouring countries every day.” This has resulted in the officials warning of the need for more humanitarian aid to the support communities.
Many Syrians have been forced out of their homes and ultimately their country as a result of raging war. There is no peace in this country as a result of the war and it is hardly possible to live in such a place. It can also be seen that homes and other necessary infrastructure have been destroyed as a result of this war. As a result, the Syrians are left with no option but to migrate to other areas that are believed to be safe. Many people who have migrated from the war torn Syria have sought refuge in neighbouring countries as well as other European countries. These people are often forced to seek asylum or refuge as a result of the fact that they are left with nowhere to stay after their homes have been destroyed in the raging civil war in their country.
Some people are also encouraged to migrate to other destinations by the favourable conditions thought to exist there. However, not all of them find their lives rosy in these far away destinations such as Europe. Yardly Jim and Planigiani, Gaia aptly state that “Having risked their lives in hopes of settling in prospering Northern Europe, many Syrians found themselves trapped in the south, living illegally in Italy, hiding from the police, as they tried to sneak past border guards and travel north to apply for asylum.” There are some lucky ones who have successfully applied for refuge and some have found employment. As a result of tough European laws on migration as well as asylum seeking, many people have found themselves trapped in these far off destinations believed to be safe havens.
The children as well as the education sector have not been spared by the devastating conflict in Syria. According to the United Nations Children’s Fund (UNICEF), the number of children affected by war and in need of humanitarian assistance has doubled from last year. The UN reports estimates “that a total of 5.5 million children have had their lives devastated by the war, and calls on the international community to take action.” Schools have been destroyed and the majority of them closed as a result of the civil war. This has also resulted in children migrating together with their parents to places that are believed to be safe. However, the war has traumatised many children who are holed in refugee camps together with their parents. These children are malnourished and they are exposed to harsh weather conditions, something unbearable at their tender age.
Over and above, it can be noted that there are mainly two factors that encourage people to migrate from one country to the other. These factors are known as push and pull. As illustrated by the case of Syria, it can be observed that millions of people are pushed out of their country as a result of the devastating war that has left millions destitute and homeless. These people are forced to seek refuge in other neighbouring as well as far of countries. On the other hand, it can be noted that people are encouraged to move to other regions as a result of promising living conditions existing in that area. These are known as pull factors. Of concern is the fact that migration caused by war is not voluntary in most cases since it is beyond the control of many people. People are forced to move to other places not by desire or will but the need to protect their lives.
Works cited
Migration Policy Centre, “Syrian refugees- A snapshot of the crisis- In the Middle East and
Europe.” < http://syrianrefugees.eu/>. February 2014. Web 10 July 2014.
UN News Center. “Number of children affected by conflict in Syria has doubled since last
year – UN. < http://www.un.org/apps/news/story.asp?NewsID=47320#.U75clEDuPMw>. 11 March 2014. Web. 10 July 2014.
Williams David. “The calamity of the century: Syrian civil war prompts worlds biggest
refugee crisis as UN reveals TWO MILLION people have fled fighting.” . 4 September, 2013. Web 10 July 2014.
Yardly Jim and Planigiani, Gaia. “Out of Syria, Into a European Maze: As war rages on,
more refugees are risking a journey to what they hope will be prosperous new lives.”The New York Times. < http://www.nytimes.com/2013/11/30/world/middleeast/out-of-syria-into-a-european-maze.html?pagewanted=all&_r=0>. 29 November 2013. Web. 10 July 2014 Read More
Share:
Tags
Cite this document
(“Push and pull factors in Syrian migration Assignment - 4”, n.d.)
Push and pull factors in Syrian migration Assignment - 4. Retrieved from https://studentshare.org/geography/1652290-push-and-pull-factors-in-syrian-migration

“Push and Pull Factors in Syrian Migration Assignment - 4”, n.d. https://studentshare.org/geography/1652290-push-and-pull-factors-in-syrian-migration.
Comments (0)
Click to create a comment or rate a document

CHECK THESE SAMPLES OF Push and pull factors in Syrian migration

... has a stronger impact than science and technology push on the patterns of innovative activities both over time and across the industry (Pavitt 1984, p365). The motivational genesis of innovation has some importance for success of the company. In a research survey conducted on 43 pairs of technological innovations, 21 percent of them required need-pull to be successful. However, in the remaining 79 percent, there was no association between failure and motivation and success. There was no case where need-pull differentiated in favor of failure or technology-push differentiated in favor of success (Rothwell 1974, p277). Mowery and Rosenberg reviewed major survey researches, which examined the factors associated with the success of industry...
8 Pages(2000 words)Essay

...? Push and Pull Marketing AFFILIATION: Question: Why Push marketing communications is more important than Pull in Business to business marketing? Answer: In marketing world, communication of an organization with its end consumers is mandatory and it needs to be well-integrated with its product or service offering so that consumers can develop an association between them. The mediums of communication that are used by marketers range from simple direct marketing activities to expensive advertisements of Television; the communication method should be decided keeping in mind the target market so that desired results can be achieved. Since consumers’ attention is the main aim of communication mediums, communication strategy can be either pull...
4 Pages(1000 words)Essay

...?How useful are the concepts of enterprise 'push' and 'pull' in explaining the factors that influence the decisions of individuals to become self-employed and/or start up a business. Self-employment or entrepreneurship is an option for the individuals, who are young and can channel their enthusiasm, and energy for problem solving and innovative venture. This study aims at analyzing the factors that motivate an individual to choose entrepreneurship or self-employment, the concept of enterprise push or pull, and the role that it plays in taking decisions for self-employment or entrepreneurship. It has been noticed that the new firms created by entrepreneurs bring in new opportunities. They also involve innovative activities that are why...
8 Pages(2000 words)Essay

... College: Syrian Revolution Syria is located on the east coast of the Mediterranean Sea and boarders Iraq to the east, Turkey in the north, Jordan in the south, Palestine from the South East and in the west Lebanon and the Mediterranean Sea. Syria borders Israel from the northeast. Notably, this border is still in dispute even today. The capital city of Syria is Damascus and Arabic is the official language. Syria’s location is strategic because it bridges three continents namely Asia, Europe and Africa. It also has a complex terrain with a desert, mountains and plain land that caused fragmentation in the socio-cultural diversity. Syria is unique in the history of the world especially due to the inclusion of Lebanon and Palestine in its...
4 Pages(1000 words)Research Paper

...Syrian crisis serve as a global conundrum towards the global peace and the action and inaction of the super powers. American foreign policy is also under question with regard to the inability of taking a decisive action. The element of Al Qaeda and its stance against Bashar Al Asad has made the affair more globally interesting and more globally intertwined in its outlook. Fragmentation within the Al Qaeda ranks may not stand in the favor of United States of America. Some of the Al Qaeda elements involved in this global affair are absconders and demanded for prosecution by United States of America, hence this falls in conflict with the core cause of ousted of Bashar AL Asad and American security internally. In the wake of such tangled...
1 Pages(250 words)Assignment

... that the impact of migration of around twenty percent of the Syrian population is being felt in the individual economies of countries to which they are migrating. Remember, due to negligible education, the refugee Syrians are unable to find the right jobs or opportunities to contribute to the new economy. As a result, the GDP is going down in most of these countries as providing for the food and shelter of refugees is a massive financial load. Also, UN has been active in looking after these families and in the process has been spending a huge amount of money to rehabilitate them. Thus, the Syrian Civil War is a great test for UN to come up with options in managing push and pull factors in economies and accommodating the individual needs...
4 Pages(1000 words)Assignment

... Push and Pull Factors in Syrian Migration Syria has been entangled in a civil war since The war started as a popular uprising against President Bashar al-Assad’s rule. The uprising started as street protests in the southern city of Deraa in March 2011. The authorities had arrested and tortured some youngsters who had painted rebellious slogans on a school wall. The move triggered nationwide protests demanding the resignation of President Assad (Wsj.com). Government security forces responded by opening fire on the demonstrators, killing hundreds of them. The protests culminated into armed conflicts against government security forces and eventually turned into a civil war between the government and rebel forces. Most people left the country...
2 Pages(500 words)Assignment

...Push/Pull System Supply chain processes fall into one of the two categories, push or pull systems. The two categories depend on thetiming of their execution relative to customer demand. Push and pull strategies are considered to be part of the traditional supply chain system popular in the 1980s manufacturing revolution. However, modern companies are now applying a combined strategy approach called the push-pull supply chain paradigm (Levi et. al, 2007). The Push System In this system, processes are executed in anticipation of customer or retailer orders and are speculative in nature (Chopra, 2007). Production and distribution decision rely on long-term forecasting of demands. The demand forecasts used by manufacturers are based...
1 Pages(250 words)Assignment
sponsored ads
Save Your Time for More Important Things
Let us write or edit the assignment on your topic "Push and pull factors in Syrian migration" with a personal 20% discount.
GRAB THE BEST PAPER

Let us find you another Assignment on topic Push and pull factors in Syrian migration for FREE!