Comments (0)
Add to wishlist Delete from wishlist
Cite this document
Summary
The rationale for this literature review is to discuss the emerging changes to the Chinese labor market in response to business globalization. At such, the writer of the review attempts to conduct an extensive analysis of China's economy throughout its modernization period in the late 20th century…
Download full paper File format: .doc, available for editing
HIDE THIS PAPERGRAB THE BEST PAPER94% of users find it useful 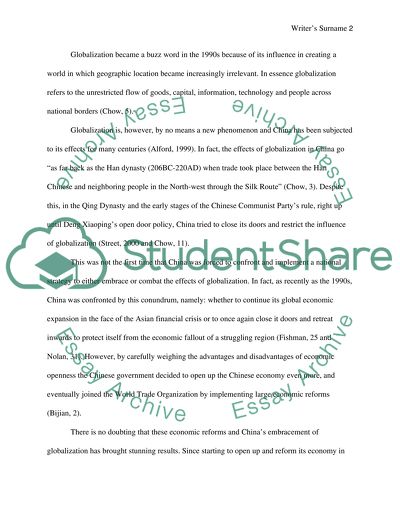 Extract of sample "State and Society in 20th Century China"

Download file to see previous pages Globalization of business can be defined as multi-directional because globalization is at the same time leading to a greater emphasis on national identity and leading to greater cooperation between nations. Globalization is creating a situation where the manager must able to work with people from different cultures, nations, regions, and continents. As China's economy has attracted attention from all over the world, lots of international companies can be found in China (Rodriguez, 2007). Due to globalization, most of the firms are workforce diversity. To be deal smoothly in China, foreigners should have the ability to perform to a great extent when dealing with the Chinese.
Globalization became a buzz word in the 1990s because of its influence in creating a world in which geographic location became increasingly irrelevant. In essence, globalization refers to the unrestricted flow of goods, capital, information, technology, and people across national borders (Chow, 5).
Globalization is, however, by no means a new phenomenon and China has been subjected to its effects for many centuries (Alford, 1999). In fact, the effects of globalization in China go "as far back as the Han dynasty (206BC-220AD) when trade took place between the Han Chinese and neighboring people in the North-west through the Silk Route" (Chow, 3). Despite this, in the Qing Dynasty and the early stages of the Chinese Communist Party's rule, right up until Deng Xiaoping's open-door policy, China tried to close its doors and restrict the influence of globalization (Street, 2000 and Chow, 11).
This was not the first time that China was forced to confront and implement a national strategy to either embrace or combat the effects of globalization. In fact, as recently as the 1990s, China was confronted by this conundrum, namely: whether to continue its global economic expansion in the face of the Asian financial crisis or to once again close its doors and retreat inwards to protect itself from the economic fallout of a struggling region (Fishman, 25 and Nolan, 31). However, by carefully weighing the advantages and disadvantages of economic openness the Chinese government decided to open up the Chinese economy even more, and eventually joined the World Trade Organization by implementing large economic reforms (Bijian, 2).
There is no doubt that these economic reforms and China's embracement of globalization have brought stunning results. Since starting to open up and reform its economy in 1978, China "has averaged 9.4 percent annual GDP growth, one of the highest growth rates in the world" (Bijian, 3). One of the reasons for the huge leaps in growth has come from a direct foreign investment that has been facilitated by China's admission to the WTO. For example, in the space of a few days in 2004, a North Korean Steel Company launched a $500 million steel project in the Dalian development zone; France's St Gobain invested $70 million in one of its presented glass production lines in China; Germany's Siemens inaugurated its 14th office in China for development of software; and Finland's Stora Enso invested $1.6 billion in a paper pulp project in Guandong Province (Hall et al, Press).  ...Download file to see next pages Read More
Share:
Tags
Cite this document
(State and Society in 20th Century China Literature review, n.d.)
State and Society in 20th Century China Literature review. https://studentshare.org/geography/1514171-state-and-society-in-20th-century-china

“State and Society in 20th Century China Literature Review”. https://studentshare.org/geography/1514171-state-and-society-in-20th-century-china.
Comments (0)
Click to create a comment or rate a document

CHECK THESE SAMPLES OF State and Society in 20th Century China

...Running Head: [short [institute of affiliation] a. Refine the analysis of the forces and trends you completed for theWeek Two assignment. The Automobile Industry today is becoming increasingly competitive, with the shift in global economies, the continuously rising fuel prices leading to a simultaneous rise in consumer preferences towards fuel efficient cars, the coming of age of Western economies and the emergence of Asian super powers such as India and China. These external environmental factors along with certain significant global issues such as, growing concern for environmental protection, and the trends towards greener and cleaner cities, governmental initiatives to reduce carbon emissions, and issues concerning protection...
10 Pages (2500 words) Assignment

... thoroughgoing adherence, in rhetoric if not in practice, to the virtues of a market economy, and, by extension, a market-oriented society. While some neo-liberals appear to assume that one can construct any kind of ‘society’ on any kind of economy, the position taken here is that the economy, the state and civil society are, in fact, inextricably interrelated (Coburn 2000). How did neoliberalism, the dominant political and economic ideology of the West since the Reagan years make inroads around the world and into the formerly Communist countries of Eastern Europe? The Second World, consisting of the global Communist community during the Cold War, was severely undermined by economic and political crises which began in the late 1960s...
6 Pages (1500 words) Case Study

... society views climate change and the occurrence of various ailments as a result of modernity. Industries led to environmental pollution and degradation of natural resources that supported life. Noah (2003 p 47) observes that the post-modern society began in the 21st century whereby knowledge was applied for personal development rather than for enlightenment. For example, learners in the post-modern society are less focused on theories that give them knowledge regarding particular issues in nature, from which they can not derive monetary value for their existence. In this view, knowledge has been commoditized to a great extent (Patrick and Nick 2001 p 66). There are many views regarding post-modernity, with some even asserting...
7 Pages (1750 words) Essay

Making its products cheaper in the US and thus encouraging imbalanced trade. It has been universally agreed that the free-floating Yuan would be significantly worth 15 cents.
Chinese economists feel that the impact has been over-exaggerated and particularly to America from Yuan revaluation. In particular, a stronger Yuan will not reduce the US’s trade deficit as there is a very smart segment of overlap between China and America Production and hence the US will not be able to replace Chinese imports. The consumer will end up paying more for imports from china or Vietnam and this would be like imposing a tax on US consumers.
The World Bank chief also disagrees with the US’s suggestion on China's currency rise a...
9 Pages (2250 words) Assignment

...Running Head: Business Sustainability & Society Business Sustainability & Society [Institute’s Business Sustainability & Society Introduction Since centuries, ethics has been a crucial and significant component of the human societies that contributed enormously in the creation of norms and values through religious influences, as well as through contribution of intellectuals and philosophers in the society. Unfortunately, nowadays, it is an observation that individuals, organizations, and even nations have commenced to overlook the phenomenon of ethics in their practices, specifically in the business sector that has become the major stakeholder confronting criticisms related to ethical practices. Critics (Crane, pp. 23-29, 2007) argue...
10 Pages (2500 words) Case Study
sponsored ads
Save Your Time for More Important Things
Let us write or edit the literature review on your topic "State and Society in 20th Century China" with a personal 20% discount.
GRAB THE BEST PAPER

Let us find you another Literature review on topic State and Society in 20th Century China for FREE!