Comments (0)
Add to wishlist Delete from wishlist
Cite this document
Summary
This paper under the headline "SAAB’s Company Cash Flow Problems" focuses on such important fact that when we say that cash is king we mean that ultimately it is the cash flow of a business that is the most important factor in sustaining it and giving it life. …
Download full paper File format: .doc, available for editing
HIDE THIS PAPERGRAB THE BEST PAPER96.3% of users find it useful 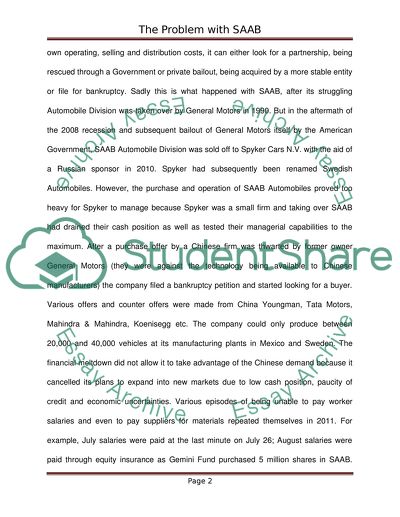 Download file to see previous pages Business failure can occur for various reasons ranging from legal, political and economic factors that are beyond an individual firm’s control, to internal factors like cash flow problems, manufacturing, and selling difficulties and lack of firm orders on which to base production capacity. If a business finds it difficult to even break even and pay its own operating, selling, and distribution costs, it can either look for a partnership, being rescued through a Government or private bailout, being acquired by a more stable entity or file for bankruptcy. Sadly this is what happened with SAAB after its struggling Automobile Division was taken over by General Motors in 1990. But in the aftermath of the 2008 recession and subsequent bailout of General Motors itself by the American Government, SAAB Automobile Division was sold off to Spyker Cars N.V. with the aid of a Russian sponsor in 2010. Spyker had subsequently been renamed Swedish Automobiles. However, the purchase and operation of SAAB Automobiles proved too heavy for Spyker to manage because Spyker was a small firm and taking over SAAB had drained their cash position as well as tested their managerial capabilities to the maximum. After a purchase offer by a Chinese firm was thwarted by former owner General Motors (they were against the technology being available to Chinese manufacturers) the company filed a bankruptcy petition and started looking for a buyer. Various offers and counteroffers were made from China Youngman, Tata Motors, Mahindra & Mahindra, Koenigsegg etc. The company could only produce between 20,000 and 40,000 vehicles at its manufacturing plants in Mexico and Sweden. The financial meltdown did not allow it to take advantage of the Chinese demand because it cancelled its plans to expand into new markets due to low cash position, a paucity of credit and economic uncertainties. Various episodes of being unable to pay worker salaries and even to pay suppliers for materials repeated themselves in 2011. For example, July salaries were paid at the last minute on July 26; August salaries were paid through equity insurance as Gemini Fund purchased 5 million shares in SAAB. September salary payments also seemed to be in jeopardy. The Swedish Enforcement Administration has been monitoring SAAB in case of failure to meet creditor’s claims. The company Union has also threatened to go on strike because of salary payment difficulties that occurred three times in 2011. So we see that even financing from potential buyers had to be resorted to so that the company could be kept afloat (www.swedecar.com). It must be admitted that the lack of cash flow emerged from an apparent lack of attention to the production and marketing mix as well. Everyone knows that when you are trying to put a company or a brand name back on its feet, a sizeable amount of money must be spent on advertising and press relations, creating hype and curiosity so that buyers are attracted to the upcoming offerings (Kotler & Keller, 2012).  ...Download file to see next pages Read More
Share:
Tags
Cite this document
(SAABs Company Cash Flow Problems Assignment Example | Topics and Well Written Essays - 1750 words, n.d.)
SAABs Company Cash Flow Problems Assignment Example | Topics and Well Written Essays - 1750 words. Retrieved from https://studentshare.org/finance-accounting/1447022-cash-flow-problems-are-one-of-the-most-common

...-end Servers for companies and institutions. As a principle HP doesn’t reveal non-public product details, financial information, marketing, R &D, manufacturing and Personnel Data. We will work on whatever information the company discloses and is available in common domain of knowledge to assess our strengths, marketing mix, current strategies, current events and global information and discuss how they can be more streamlined in. In today’s world no amount of market strategising is enough, no amount of competitor’s latest strategies and innovation and we have always to remain in an ever evolving role. HP Pavilion and sister products We have chosen our Personal Computer as the product of our current study. Just for sake of recall, we make...
8 Pages (2000 words) Case Study

..., 2001). From this aspect, business practices of the Coca-Cola Company seems very unethical as it has been causing huge number of problems and issues for the community members of Kala Dera village of India. However, Utilitarianism limits its range by focusing on the majority of people that benefit or confront losses from the actions (Mill, pp. 37-48, 2001). From this specific standpoint, it becomes a complex task to evaluate the business practices ethically, as from the company’s profile, more stakeholders will be affecting by the closure of bottling plant, as compared with the victims of village that will be few thousand. This shows the ineffectiveness of the ethical theory of Utilitarianism (Wellman, pp. 63-74, 2002) that while focusing...
10 Pages (2500 words) Case Study
sponsored ads
Save Your Time for More Important Things
Let us write or edit the assignment on your topic "SAABs Company Cash Flow Problems" with a personal 20% discount.
GRAB THE BEST PAPER

Let us find you another Assignment on topic SAABs Company Cash Flow Problems for FREE!