Things I Would Mostly Miss about US - Assignment Example

Comments (0)
Add to wishlistDelete from wishlist
Cite this document
Summary
This assignment presents the opinion of the author regarding moving abroad. The author tells what things he would most miss about the United States of America like the personal interaction, having advanced technology, efficient transport systems, US civil rights, etc…
Download full paperFile format: .doc, available for editing
HIDE THIS PAPERGRAB THE BEST PAPER96.6% of users find it useful 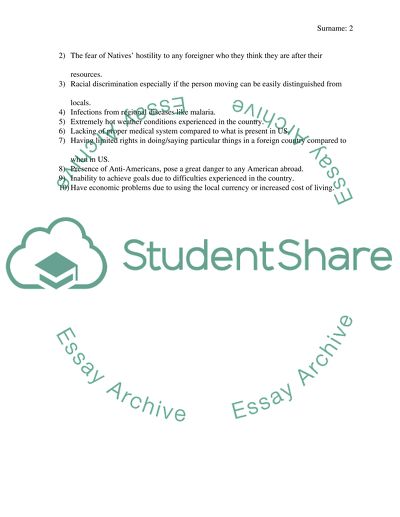 Extract of sample "Things I Would Mostly Miss about US"

Task Moving abroad Things I would mostly miss about US Unlike India, in American culture individuals do not have the urge to know everybody around them to personal level. I would mostly miss the personal interaction in US.
2) I would dearly miss having advanced technology that allows an individual virtually to do everything from a fixed place.
3) America has a state of art public infrastructure including better roads and offices. Therefore, I would mostly miss efficient transport systems that have no congestions.
4) Security with more advanced system that limits crime rate
5) There is crowd civilization in US in cases of demonstration when problems arise.
6) US citizen rights that are lost once you are in a foreign country.
7) General hygiene high standard levels maintained in US compared to India.
8) Weather that does not reach an extreme level as those experienced in India.
9) Living away from family and friends who have always been around will be hard.
10) Have American lifestyle that allows wearing of anything.
Exciting Things to Move to India
1) I would feel highly excited to learn Indians culture for better understanding of the people in the country.
2) Learn a new language from the native community during the assignment period.
3) It would be most interesting to develop international friends to improve personal and work profile.
4) Experience working with people from different cultures.
5) Get a large compensational package that comes with working on overseas.
6) Get promotional opportunities through posts available abroad.
7) Receive cheap medical cover from Indian medical centers compared to US.
8) Have an opportunity to expand business in the new territory.
9) Spend less due to Low cost of living in India.
10) Achieve goals by completing personal assignment (Santos, 2013).
Things to Fear in Moving to India
1) The thought of higher level of Insecurity when in India compared to when in US would scare me the most.
2) The fear of Natives’ hostility to any foreigner who they think they are after their resources.
3) Racial discrimination especially if the person moving can be easily distinguished from locals.
4) Infections from regional diseases like malaria.
5) Extremely hot weather conditions experienced in the country.
6) Lacking of proper medical system compared to what is present in US.
7) Having limited rights in doing/saying particular things in a foreign country compared to when in US.
8) Presence of Anti-Americans, pose a great danger to any American abroad.
9) Inability to achieve goals due to difficulties experienced in the country.
10) Have economic problems due to using the local currency or increased cost of living.
Reference
Santos, R. (2013). Moving Abroad: One Step at a time: real stories and advice to help you succeed. St Albans, Herts: Panoma Press. Read More
Share:
Tags
Cite this document
(“Things I Would Mostly Miss about US Assignment Example | Topics and Well Written Essays - 250 words”, n.d.)
Things I Would Mostly Miss about US Assignment Example | Topics and Well Written Essays - 250 words. Retrieved from https://studentshare.org/english/1676598-things-i-would-mostly-miss-about-us

“Things I Would Mostly Miss about US Assignment Example | Topics and Well Written Essays - 250 Words”, n.d. https://studentshare.org/english/1676598-things-i-would-mostly-miss-about-us.
Comments (0)
Click to create a comment or rate a document

CHECK THESE SAMPLES OF Things I Would Mostly Miss about US

Ten Things I Hate About You Film Review

...?Shakespeare Meets Modern Day High School 10 Things I hate about you. Director:  Gil Junger Karen McCullah Lutz, Kirsten Smith, Stars: Heath Ledger, Julia Stiles and Joseph Gordon-Levitt Good acting performances, mildly witty dialogues and a Shakespearean adaption ( Taming of the Shrew) make this 1999 teen oriented movie “10 Things I hate About You” and interesting watch. Although I am not much into teen movies and stumbled on this one due to entirely unforeseen circumstances, I was surprised to see a non-irritating teen movie. Kat (Julia Stiles future agent Parson in Bourne Identity) and Bianca (Larisa Oleynik) are sisters but despite their blood relation, their personalities are exact polar opposites. Bianca, the younger is one of those...
1 Pages(250 words)Coursework

...?Throughout the progression of this I learned a wide variety of things concerning my writing. While it’s clear that there are endless things Ilearned throughout the course, I believe there are two main things learned: the step by step process, as well as how to properly research for an essay. In terms of the step-by-step process, there were a great many aspects that I learned about and skills I strengthened throughout the course. While I had previously viewed writing essays as a more free-form means of expression, I increasingly came to understand that in following certain steps my writing would improve. In these regards, I now begin my writing be developing a detailed outline of what I am going to write. In brainstorming and developing...
2 Pages(500 words)Essay

When looking at a scene, everything in it may seem more or less sharp, though sometimes in the final shot only a part of the image appears notably sharp. The zone of sharpness is referred to as the depth-of-field. The smaller the size of the aperture, the wider the depth-of-field. Very small apertures may require using a tripod to reduce the camera shake resulting from long shutter speeds. However, if the concentration is on one part, a large aperture should be selected depending on the maximum aperture of the camera lens in use. For general shooting medium aperture is appropriate.
Shutter speed refers to the measurement of that time when the shutter is open. The measurement is in seconds and sometimes fractions of a second. I...
5 Pages(1250 words)Essay

Miss Representation There are many ways artists can convey their message to the world, but the magnitude of effect a good motion picture possesses, other mediums simply don’t match it. ‘Miss Representation’ is an interesting documentary, as it gives the viewers a peak into what goes on behind the cameras. Whether media has an agenda or not? Famous personalities like Condoleezza Rice, Lisa King and Nancy Pelosi have been interviewed in this documentary. Many questions of provocative nature have been posed to these celebrities to leave the conclusion to the viewers.
Overall the message of this documentary is, ‘You can’t be what you can’t see.’, and I completely agree with it. One of the most useful tools for the mainstream (...
1 Pages(250 words)Essay

... Here Here Here Here The Anxiety of Embarrassment When I was asked to write a paper about things I dislike and to present the ideas to the class, I couldnt help but to chuckle. In a rare example of true irony in life as Ive experienced it, I would soon be giving a presentation about my hatred of giving presentations. After recovering from the initial panic and giving the idea some consideration, I realized that this would be the perfect opportunity to learn more about the reaction, instead of ignoring it as usual. Perhaps, by understanding some of the reasons that I despise giving presentations, I can gain some insight on how to overcome it in the future. The dislike of presenting, as far as I can tell from my particular perspective...
2 Pages(500 words)Essay

I Miss My Teacher

...﻿ My junior school teacher was called Miss Gladys. I vividly remember the first day my parents handed me over to her as a new student after my family moved to the city. As a young, timid boy aged nine years, I was scared at the thought of being left in the hands of a towering, deep voiced figure that was Miss Gladys. However, the moment my parents waved goodbye and left, I realized I had to adjust to the new environment. Everything suddenly changed from tense to calm as Miss Gladys smiled, took my hand and led me to class. I was surprised by her kindness. Though her voice was deeper than most females I knew, her words were so polite. She welcomed me and relaxed my nerves. She made sure I had my desk and locker without being bullied...
1 Pages(250 words)Essay

... of human figures. They are posed in groups, as if talking to each other, and this creates a confusion of connections, forcing the viewer to look closely at the faces in order to work out what is going on. The use of perspective and scale is very interesting in this picture. The bottom left corner is the largest, and appears to represent an upper tier of the restaurant. The bottom right of the painting is in a smaller scale, suggesting that this may be a lower level of the restaurant. This means that the brown dividers can be interpreted as beams and supports. Along the top of the painting there is a street scene, complete with sky and trees, and this also has a lot of detail, though the scale suggests that it is in the distance. A very...
4 Pages(1000 words)Essay

... played a big role about women representation. This paper is going to analyze the power of the media. The paper further analyzes the effects of the negative identity created by the media on the female fraternity hence affecting their roles in the society. The media has been used to portray a negative effect about women and this has further influenced their roles and positions in the world. This is because you can’t be what you can’t see. ­Miss Representation ‘The media is the message and the messenger’ these were the opening remarks in this documentary by Pat Mitchell who is the president and CEO of Paley Center for Media. The author of The Macho Paradox Jackson Katz argues that people learn a lot from the media that in any other source...
4 Pages(1000 words)Essay

... Environmental Studies In the first video, Stephen Ritz, a teacher at South Bronx, explains the harsh realities of thetough neighborhood and the things he does to improve his students’ lives and that of the community. Ritz and the students grow lush gardens to get food, greenery and jobs for the students when they finish school. The Bronx classroom has an edible wall that produces adequate vegetables to feed up to 450 students. Ritz expanded this initiative to neighboring schools and communities. The initiative also attracted the attention of many big corporations. These students are from very poor backgrounds, but they were able to install the green walls in various places for their survival. They bring back to life all abandoned...
1 Pages(250 words)Essay
sponsored ads
Save Your Time for More Important Things
Let us write or edit the assignment on your topic "Things I Would Mostly Miss about US" with a personal 20% discount.
GRAB THE BEST PAPER

Let us find you another Assignment on topic Things I Would Mostly Miss about US for FREE!