Comments (0)
Add to wishlistDelete from wishlist
Cite this document
Summary
These men are deliberating the fact that the kingdom is near to be divided by King Lear. King Lear, Britain’s ruler goes to his throne room and reveals his idea of dividing the kingdom among his three daughters. The king…
Download full paperFile format: .doc, available for editing
HIDE THIS PAPERGRAB THE BEST PAPER98.2% of users find it useful 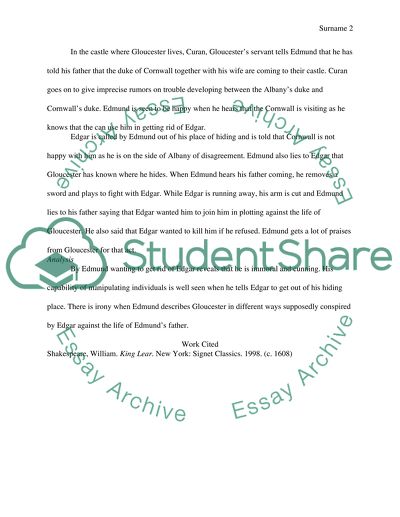 King Lear Act The play starts with two noblemen, Kent and Gloucester. These men are deliberating the fact that the kingdom is near to be divided by King Lear. King Lear, Britain’s ruler goes to his throne room and reveals his idea of dividing the kingdom among his three daughters. The king wants to give up the government responsibilities. The king directs his daughters to state which among the three loved him the most. He promised to offer the largest share to the daughter who loved him most. Regan and Goneril, King Lear’s devious daughters respond to their father with flattery. They tell King Lear that they do love him very much.
King Lear’s favorite and youngest daughter, Cordelia, does not talk about loving his father. When compelled, she asserts that she loves his father the way a daughter is needed to love her father. Cordelia goes on to assert that her other two sisters would not have husbands if they gave their love to the king as they had stated earlier (90-91). King Lear responds with anger and disowns Cordelia. The share of the kingdom is then shared among Regan and Goneril.
Analysis
The demand of King Lear that his daughters show how much they love him is perplexing and suggests the fear and insecurity of the old man who wants to be pleased of his own importance. Regan’s and Goneril’s love is seen to be flattery. Contrary to her sisters, Cordelia is seen not to know how to compliment her father, an instant reflection of her true devotion and honesty to him. When asked what she can say in getting the greatest inheritance, she says, “Nothing my lord” (86). The love of Cordelia and the king’s blindness to its reality cause the tragic events that come later.
Act 2
In the castle where Gloucester lives, Curan, Gloucester’s servant tells Edmund that he has told his father that the duke of Cornwall together with his wife are coming to their castle. Curan goes on to give imprecise rumors on trouble developing between the Albany’s duke and Cornwall’s duke. Edmund is seen to be happy when he hears that the Cornwall is visiting as he knows that the can use him in getting rid of Edgar.
Edgar is called by Edmund out of his place of hiding and is told that Cornwall is not happy with him as he is on the side of Albany of disagreement. Edmund also lies to Edgar that Gloucester has known where he hides. When Edmund hears his father coming, he removes a sword and plays to fight with Edgar. While Edgar is running away, his arm is cut and Edmund lies to his father saying that Edgar wanted him to join him in plotting against the life of Gloucester. He also said that Edgar wanted to kill him if he refused. Edmund gets a lot of praises from Gloucester for that act.
Analysis
By Edmund wanting to get rid of Edgar reveals that he is immoral and cunning. His capability of manipulating individuals is well seen when he tells Edgar to get out of his hiding place. There is irony when Edmund describes Gloucester in different ways supposedly conspired by Edgar against the life of Edmund’s father.
Work Cited
Shakespeare, William. King Lear. New York: Signet Classics. 1998. (c. 1608) Read More
Share:
Tags
Cite this document
(“Shakespeare, William. KING LEAR acts I-II Book Report/Review”, n.d.)
Shakespeare, William. KING LEAR acts I-II Book Report/Review. Retrieved from https://studentshare.org/english/1664153-shakespeare-william-king-lear-acts-i-ii

..., I am Lear.” (The Methuen Book of Shakespeare Anecdotes, 1992: 67). Evil does not triumph in “King Lear”. Instead, it is clear after a study or viewing of the play the desire for power and wealth is self-destructive. Even when good appears to have won, however, evil still waits within all people to undo any of the positive that good may have done. The complexity of Lear’s journey of self-discovery is a lesson to the audience, but not a simple one. It may well be that, as has been claimed, “King Lear” is Shakespeare’s greatest tragedy. Certainly it is so that this is a complex, insightful and devastating view into the human psyche. References (Text) Baldwin, T.W. (1947) William Shakespeare’s Five-Act Structure London...
8 Pages(2000 words)Research Paper

...? King Lear Thesis: Being blind means existence in a sealed space; being aware means existence with no set limits. Spiritual wanderings of King Lear,his thorny path to the revelation of truth presents to the readers a process of the individual’s transformation from an arrogant, selfish, socially dominant person into a loving father. Introduction A great masterpiece by William Shakespeare “King Lear” opens the doors in the inner world of a challenging personality of King Lear. The main character got mad after realizing his own foolishness: he inattentively disposed his assets between his two clever and cunning daughters. Two girls flattered their father in order to get his property: they convinced him that they loved him more than anyone...
5 Pages(1250 words)Thesis

...?True Love in “King Lear” Introduction King Lear is one of the greatest plays by William Shakespeare. A depiction of the interesting and challenging personalities of the main characters make the readers think about a challenging nature of human inner world. The deepest feeling of humanity, love, is correlated with the personal arrogance and superiority of King Lear. True love is reflected by Cordelia and Gloucester’s sons. Lear’s daughter shows her love for her father King Lear, who was misguided by his eldest daughters and got mad finally. Gloucester is misguided by his greedy son, who closes his father’s eyes on a true love of his loving son. Therefore, a concept of love discussed further on in terms of relations between children...
3 Pages(750 words)Term Paper

... of Lecturer 29 October TRICK: William Shakespeare's King Lear The greatness of a man is actually determined by how well he ends and for King Lear; he did not end well in any way. What more can be as tragic as two of one’s supposedly favorite daughters ganging against their own father? King Lear was in such a situation as his two daughters that should be the ones taking care of their fathers ganged up to frustrate his efforts and thwart his plans of running his kingdom effectively. Goneril and Regan pushed their father to the wall and he reacted. Now, it is a terrible thing for a father to be at war with his children and this was the case of King Lear. This was tragedy at its fullness and it was actually due to King Lear’s decision to give...
5 Pages(1250 words)Essay

Thesis Art helps the main characters to find the truth, understanding the meaning of friendship and love, and resist chaos and evil.
In King Lear, the concept of art is based on binary opposition; good - evil, life - death, chaos - order. Using his techniques, Shakespeare 'teaches' the audience about good and bad, virtues and sins, social and immoral behavior. For instance, actions of Duke of Cornwall and Regandepict low morals of people who act in their own interests only forgetting about human virtues and goodness. Regansarcastically comments: "Which the most precious square of sense possesses, / And find I am alone felicitate / In your dear Highness' love" (Shakespeare 1999). Using binary opposition of good and evil, Shake...
5 Pages(1250 words)Essay

Lear inherited and perceived bad and good traits from both of them. The story of King Lear teaches us that the attaching of excessive importance to things in the material world causes passions and suffering.
In the beginning, the bad overwhelms in Lear’s character. We see Lear-despot. On the one hand his despotism origins from the feudal prerogative of a monarch. On the other one, being an outstanding person, surrounded by universal admiration, he gets a false idea that his royal dignity rests upon his personal superiority. Like the rest of the characters, Lear possesses a highly developed individualistic consciousness, which is a feature of the new psychology. Unfortunately, this awareness of personal dignity acquires...
12 Pages(3000 words)Literature review

Fatima Shahid Wang English 170W October 10, King Lear Thesis ment This play explores the tragedy that come across a kingdom dueto monarchies and thrones handovers. This case explores a particular descend of titular character of a king after he disposes his estate among his three daughters basing on their flattery and brining tragic for all.
Introduction
King Lear is a play filled with human cruelty and insincere disasters. Human cruelty is rampant throughout the play giving a perception that human beings are prone to cause hurt and pain to one another. Many successive events are not justified meaning that justice is not normally considered. This raises the question as to whether there is justice in the world. Furthermore, it...
1 Pages(250 words)Essay

... Act 4, scene 2 is full of a range of interesting events. Edmund and Goneril display a desire for intimacy while Albany believes that his wife is evil and has always manifested ulterior motives. Goneril and Albany engage in an intense argument that leads to their separation. This argument is only toned down upon the arrival of a messenger with the sad news of Cornwall’s death. Interestingly, however, Albany shows much concern about Edmunds betrayal of Gloucester. Albany makes a final declaration that he supports the King. The scene is highly interesting due to the degree of emotional exchange happening between the characters. For this scene, a mis-en-scene can be developed on lighting and costuming. Lighting is instrumental in giving...
1 Pages(250 words)Essay

... hard to convince Gloucester that the ground was steep. When they reached the end section of the platform, they stopped and “Edgar” points at the wall that had the image of scenery of the sea. His description of the sea and the corresponding scenery captured the mind of the reader before “Edgar” walks away leaving the old man to fall approximately two feet down to the normal floor of the stage. The acting crew presented the play boldly in a manner that represented the societal themes that Shakespeare establish using language in the famous play King Lear. Work Cited Shakespeare, William, and Stanley Wells. The History of King Lear. Oxford: Oxford University Press, 2008. Print....
1 Pages(250 words)Essay

...﻿ King Lear by William Shakespeare: Sight vs. Blindness The theme of sight vs. blindness is one of the most recurring in Shakespeare’s tragedy King Lear. In fact, the whole play is built around blindness of Lear as well as Glouster and his son Edgar. They become victims of their short sight and inability to face the reality. Their stories are similar in many ways. People around them – Cordelia, Kent, Fool, Edmund – possess insight, which provides them with better opportunity to adopt and survive. Only Edgar just like his father becomes the victim of his naivety and blindness. Edgar, Lear and Glouster become able to understand things only after they lose everything. Edgar pretends to go mad, Lear goes mad and Glouster loses his eyes, all...
7 Pages(1750 words)Book Report/Review
sponsored ads
Save Your Time for More Important Things
Let us write or edit the book report/review on your topic "Shakespeare, William. KING LEAR acts I-II" with a personal 20% discount.
GRAB THE BEST PAPER