Comments (0)
Add to wishlist Delete from wishlist
Cite this document
Summary
Euthanasia that is even regarded as physician assisted suicide has gained ample amount of popularity throughout the world and there has been a debate of whether the act should be legalized in USA or not. Euthanasia should be legalized in USA because majority of the population…
Download full paper File format: .doc, available for editing
HIDE THIS PAPERGRAB THE BEST PAPER94.9% of users find it useful 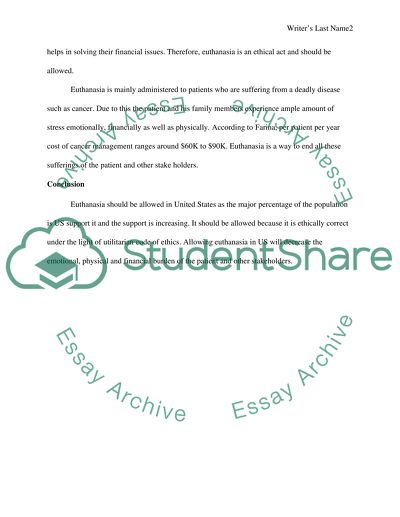 Euthanasia Should Be Allowed In USA Introduction Euthanasia that is even regarded as physician assisted suicide has gained ample amount of popularity throughout the world and there has been a debate of whether the act should be legalized in USA or not. Euthanasia should be legalized in USA because majority of the population supports legalization, it is ethically correct for an individual to decide about their death and it reduces suffering.
Body
The policy makers in the United States are there to serve in the best interest of its citizens. They should make policies that are supported by the majority of the population. In case of legalization of Euthanasia, the act should be legalized because a major chunk of the population is supporting it and the support is increasing. PEW research reports that within a period of eight years the support for legalization of euthanasia has increased from 47% to 49% (PEW 1).
Euthanasia should be allowed in United States because it is an ethically correct decision. According to the ethical decision making system of utilitarianism, only those acts and decisions are correct that result in the heights amount of happiness of the society (Su 65). Euthanasia relieves the patient as well as their family members from severe emotional and physical pain and helps in solving their financial issues. Therefore, euthanasia is an ethical act and should be allowed.
Euthanasia is mainly administered to patients who are suffering from a deadly disease such as cancer. Due to this the patient and his family members experience ample amount of stress emotionally, financially as well as physically. According to Farina, per patient per year cost of cancer management ranges around $60K to $90K. Euthanasia is a way to end all these sufferings of the patient and other stake holders.
Conclusion
Euthanasia should be allowed in United States as the major percentage of the population is US support it and the support is increasing. It should be allowed because it is ethically correct under the light of utilitarian code of ethics. Allowing euthanasia in US will decrease the emotional, physical and financial burden of the patient and other stakeholders.

(Whether or Not Euthanasia Should Be Allowed in the USA Research Paper)
https://studentshare.org/english/1658268-whether-or-not-euthanasia-should-be-allowed-in-the-usa.

“Whether or Not Euthanasia Should Be Allowed in the USA Research Paper”, n.d. https://studentshare.org/english/1658268-whether-or-not-euthanasia-should-be-allowed-in-the-usa.
Comments (0)
Click to create a comment or rate a document

... is less humane than active euthanasia as it is relatively slow hence a painful death. He points out that active euthanasia can be a lethal injection that can be quick and less painful or totally painless in terminating one’s life. On the other hand, opponents of euthanasia are of the view that active and passive euthanasia have a moral distinction that is very clear (Walsh et al., 2009). Letting one die from a terminal illness is viewed by this group as allowing the disease to naturally cause the death of a patient without moral guilt. Walsh et al. (2009) point out that palliative care significantly postpones the death of a patient. Withholding or withdrawing of these interventions means the patient dies of the underlying illness...
6 Pages (1500 words) Research Paper

...FAITH & HOPE CONCLUDING LIFE: ABANDONMENT OF HOPE NONQUANTIFIABLE FAITH & HOPE AGAINST EUTHANASIA SHIRLEY BONGBONG FOR ACADEMIA-RESEARCH Candle, faith and fate are the three things I would want to linger on when something goes wrong in my life. A lighted candle within a dark space symbolizes a flicker of hope amidst life turmoil's and unbearable headache. Faith is an old fashioned hand me down belief and a moment of supernatural power that serves to strengthen body and soul to nourish hope beyond explanation of detail and science. Fate is a complementary feature of faith, a by product of past acts, concluding history of one's worldly breath and values of life at a given time. I believe that everything happens for a reason. Events...
3 Pages (750 words) Essay

Euthanasia Should Be Allowed

...Should Euthanasia be allowed? Euthanasia is deliberate killing of a seriously or terminally ill human being, apparently for his/her benefit. The important word here is “deliberate”, meaning, to act upon a conscious decision. Euthanasia is also referred to as “mercy killing”. Euthanasia can be either voluntary or involuntary. Euthanasia is usually applied for terminal patient cases where there is no or little chance of recovery. Unfortunately, the recent times had seen euthanasia being interpreted in various and confusing ways, not all of which are agreeable to ethical codes of life. Arguments Against: Euthanasia is applicable for “terminally ill” patients, who have no scope of recovery and the rest of their life is bound to be full...
2 Pages (500 words) Essay

... euthanasia, and not passive euthanasia, the morally preferable option’. Hence, allowing the patient to exercise his right to die in dignity is ethical. I seriously believe that for person who is in perpetual pain and where death is the only solution, euthanasia is the morally and legally correct alternative. Indeed, despite the expanding knowledge, the limitation of medical should also be accepted as a fact. The informed choices empower one to decide what is good for one or not, thereby making euthanasia morally right for terminally sick person who wishes to die in peace. (588) Reference Brandt, Richard. (1975). A Moral Principle About Killing: A Moral Principle About Killing. [In Marvin Kohl, ed., 1975, Beneficent Euthanasia, Buffalo, NY...
2 Pages (500 words) Term Paper

...Outline and Bibliography Outline This paper examines the phenomenon of euthanasia, presenting some working definitions of the practice in modern medicine. It takes the point of view that euthanasia is not an acceptable ethical or moral choice, from most particularly the Christian viewpoint presented. This perspective is taken based on Biblical instruction against the acts of both murder and suicide. To present an overview of the arguments against euthanasia, three major world religions’ stances are examined: Christianity, Islam and Judaism. Christianity forms the basis of the argument throughout the discussion; Islam and Judaism are presented in support of this ethical and moral perspective. Thereafter, the attitudes of medical personnel...
11 Pages (2750 words) Research Paper

Whether music is allowed according to the islamic shari'a

It is imperative to be aware of what our religion teaches us about music, acceptance and tolerance of music, and to what extent we are permitted to listen to music. For this we need to refer to the Quran, Hadith and sayings of the Rightly Guided Caliphs and Prophet’s companions. According to these sources, music has been termed as ‘haraam’ in our religion. Interpreters of the Holy Quran have identified the term “lahwal hadith’ as listening and singing songs, buying music and buying instruments for amusement.
Sayyidana Abdullah Ibne Mas`ood, a close companion of the Holy Prophet was inquired the meaning of the phrase “lahwal hadith’ and he answered, “I swear by Him besides whom there is no other God, that it refers to ghinaa (...
9 Pages (2250 words) Essay

There are a plethora of perspectives which must be considered and this paper will shed light upon the most important perspectives.
No religion in the world would vouch for assisted suicides as it is a huge sin to bring your life to an end and it is an even bigger sin to help someone die but in the case of terminally ill people it is a different story. There are several NGOs that have been established to help terminally ill people; Dying with dignity is one such NGO which is located in Canada. The members of the NGO have been trying hard to help terminally ill people, the NGO supports assisted suicide but at the same time they have been trying to ensure that the terminally ill patients die without any pain and they die with...
5 Pages (1250 words) Term Paper

In both cases the death inducing medicine is prescribed by the physician. As far as the patient is concerned both euthanasia and PAS are self-willed; while the latter is self-inflicted euthanasia is administered by another person (Boudreau & Somerville, 2014, p. 2). Today, there is growing societal acceptance of euthanasia while public opinion towards its legalization is steadily increasing in many nations. However, legalized euthanasia, as it is practiced today, raises a number of concerns and this paper seeks to explore the various aspects of the issue.
In United States, Oregons Death with Dignity Act of 1997 marked the legalization of the nation’s first assisted-suicide bill. In Belgium and Netherlands, both euthanasia and...
8 Pages (2000 words) Admission/Application Essay
sponsored ads
Save Your Time for More Important Things
Let us write or edit the research paper on your topic "Whether or not euthanasia should be allowed in the USA" with a personal 20% discount.
GRAB THE BEST PAPER

Let us find you another Research Paper on topic Whether or not euthanasia should be allowed in the USA for FREE!