Comments (0)
Add to wishlistDelete from wishlist
Cite this document
Summary
The author of the poem is Jimmy Santiago Baca who is considered to be an American poet and writer, but with the Mexican origin. He lived in Chicano and Apache descent, brought up without parents and was convinced of drug possession.
2. The ethnic identity of the poet plays…
Download full paperFile format: .doc, available for editing
HIDE THIS PAPERGRAB THE BEST PAPER97.8% of users find it useful 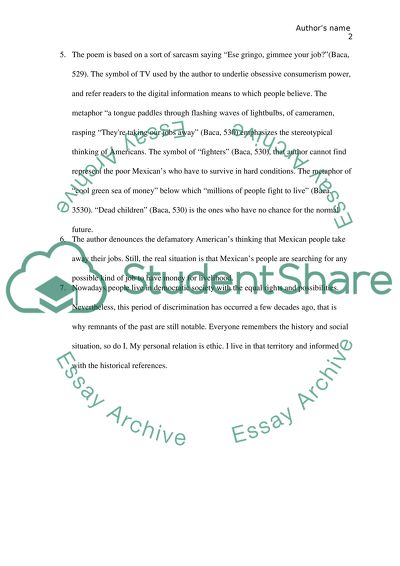 Extract of sample "Analyze a poem"

Jimmy Santiago Baca “So Mexicans Are Taking Jobs from Americans The of the poem is Jimmy Santiago Baca who is considered to be an American poet and writer, but with the Mexican origin. He lived in Chicano and Apache descent, brought up without parents and was convinced of drug possession.
2. The ethnic identity of the poet plays an essential part in our perception and understanding of the creation. As Baca concentrates attention on hard social problem connected with racial preconceptions it is important to recognize that the author is a part of a described life, and he knows what he is writing about. It makes the readers understand that the message of the poem is authentic and reliable.
3. First lines of the poem depict the image of stereotypical Mexican bandit riding up on horse and establishing their rights. Then Baca presents the picture of Mexicans who “sneak into a town at night” (Baca, 530) and deprive jobs from Native Americans. The author suggests the strict and ridiculous stereotypes that are created about Mexican people. Last stanza discloses all reality of the existed situation.
4. The poem is written in the period of racial discrimination in America. Africans and Mexicans have been oppressed in the society and active revolt has been occurred due to such situation. Historical context is straightforwardly connected with the poem as the work introduces social problem relevant in that period.
5. The poem is based on a sort of sarcasm saying “Ese gringo, gimmee your job?”(Baca, 529). The symbol of TV used by the author to underlie obsessive consumerism power, and refer readers to the digital information means to which people believe. The metaphor “a tongue paddles through flashing waves of lightbulbs, of cameramen, rasping “Theyre taking our jobs away” (Baca, 530) emphasizes the stereotypical thinking of Americans. The symbol of “fighters” (Baca, 530), that author cannot find represent the poor Mexican’s who have to survive in hard conditions. The metaphor of “cool green sea of money” below which “millions of people fight to live” (Baca. 3530). “Dead children” (Baca, 530) is the ones who have no chance for the normal future.
6. The author denounces the defamatory American’s thinking that Mexican people take away their jobs. Still, the real situation is that Mexican’s people are searching for any possible kind of job to have money for livelihood.
7. Nowadays people live in democratic society with the equal rights and possibilities. Nevertheless, this period of discrimination has occurred a few decades ago, that is why remnants of the past are still notable. Everyone remembers the history and social situation, so do I. My personal relation is ethic. I live in that territory and informed with the historical references.
Reference List:
Baca, Jimmy Santiago. “So Mexicans Are Taking Jobs from Americans”, 1979, p. 529-530. Print. Read More
Share:
Tags
Cite this document
(“Analyze a poem Assignment Example | Topics and Well Written Essays - 250 words”, n.d.)
Retrieved from https://studentshare.org/english/1651823-analyze-a-poem

CHECK THESE SAMPLES OF Analyze a poem

...?Your Full Your Teacher’s 28 February Poem Review The Crazy Woman by Gwendolyn Brooks is, seemingly, about a woman who goes against the custom of singing in May, a time for happy songs, choosing to sing in November instead. Whether this is because she cannot sing a song of May in tune, or because she wants to go against the grain is open for interpretation. However, upon closer examination, it seems that this is a poem about a rebellious soul; someone who does not want to follow the rules arbitrarily set by the society. The poem can be taken to be a sort of ode to the women’s liberation movement. It is about a woman who does not follow what is expected, but rather marches to the beat of...
2 Pages(500 words)Essay

...) the voice of her mistress is not pleasing compared to music/ and the latter part of the Sonnet, (11) Shakespeare compared his mistress to a goddess that walk on the ground which expresses his admiration to the mistress/ and has considered his mistress to be rare among those that could be given false representation and ridiculous comparison (Hale, J. 2002). In line three, (3) Shakespeare uses the word dun in comparison to his mistress brownish gray breast. In line five, (5) the cheek of his mistress was compared to roses damasked red and white. However, the use of this comparison is absurd and a little bit hard to analyze especially if the reader has no idea or knowledge about the features of the given flower in the...
2 Pages(500 words)Essay

...? Sadness and War in “They Beat Their Drums “ ID: “They Beat Their Drums” is an ancient Chinese poem that speaks both of historical events and of happenings that are of a personal nature to the narrator. The literal meaning of the poem follows a man who was part of a war and who returns home. This can be seen through the strong imagery of war in the first part of the poem, the use of a marriage vow in the fourth stanza, and the narrator’s despair at their bond being broken. However, the literal elements of a poem are only one way of examining the meaning of the words, and meaning can be determined through a deep analysis of different aspects of the poem....
5 Pages(1250 words)Essay

Compare and analyze poems, then answer whcih is more stronger and satisfying poem

...Comparison between "The by Richard Wilbur and "Digging" by Seamus Heaney "The by Richard Wilbur and "Digging" by Seamus Heaney both talk about the writing profession, referring to it as a laborious task very hard to master. "The Writer" is a poem written from the perspective of a writer parent watching his daughter aspiring to become a writer herself. "Digging" describes a writer who watches his father doing their traditional family job of farming. Though both the poems deal with father sibling relationship, Richard Wilbur's "The Writer" is much more satisfying and interesting to read. A writer talks about another budding writer here with empathy and fatherly love. The imagery and language used in the...
5 Pages(1250 words)Essay

Compare and analyze 2 poems, then answer which is more stronger and satisfying poem

Poem: by Canadian author. Desi Di'Nardo- Beautiful Vagabonds Analyze the author and the subject of the poem in relation to the universal themes / issues explored through Canadian literature

...Beautiful Vagabonds Word Count: 783 (3 pages) Have you ever read something that moved you, that grabbed your attention, that broke the ‘frozen sea inside,’ as Kafka mentioned? This is what Desi Di’Nardo does, in the poem Beautiful Vagabonds—in which the following issues will be analyzed: the author, the subject of the poem, and the poem itself—all in relation to the universal themes. The author of the poem is obviously trying to imply something deeper here, using nature as a forum for what the poet wants to get across. This poem is not only about nature’s beauty, but the poet perhaps has a different type of message that the poet is...
3 Pages(750 words)Essay

Analyze a Poem of Your Choice

... When I consider everything that grows (Sonnet 15) “When I consider everything that grows” Is a poem written by William Shakespeare. It is contained in a collection of poems known as Shakespeare’s sonnets. It is one of the poems written in the romantic period. The poem is considered to be among the most well-known poems that are written in English. The poem is about youth and procreation. The poet praises the young man of his youth and urges him to procreate. The poet seems to be uncertain that the man will procreate to a point where he immortalizes the man. Up to this point the speakers goal is to show the man that life is short and if he continues that way, he might leave no bloodline behind The poet uses hyperbola in the poem... . The...
1 Pages(250 words)Essay

...Poem Reading by Vocal delivery of a poem is a complicated task because it requires deep understanding of the text and certain eloquence. While reading for the first time it was difficult to capture the exact meaning of the author and convey it with the help of intonation and voice. I have noticed that making right pauses gives a poem coherency and can reveal author`s message. However, it is not that easy to understand where it is necessary to make all stops after the first reading because logical pauses do not always coincide with punctuation marks. Moreover, it is important to pronounce different words with different loudness to create necessary rhythm, and it is also possible only after...
1 Pages(250 words)Essay
sponsored ads
Save Your Time for More Important Things
Let us write or edit the assignment on your topic "Analyze a poem" with a personal 20% discount.
GRAB THE BEST PAPER

Let us find you another Assignment on topic Analyze a poem for FREE!