The Life and Death of Stars (Astronomy) - PowerPoint Presentation Example

Comments (0)
Add to wishlistDelete from wishlist
Cite this document
Summary
The age, distribution and composition of stars, create a pattern of growth and development of that galaxy. The field of astronomy is based on the birth,…
Download full paperFile format: .doc, available for editing
HIDE THIS PAPERGRAB THE BEST PAPER96.2% of users find it useful 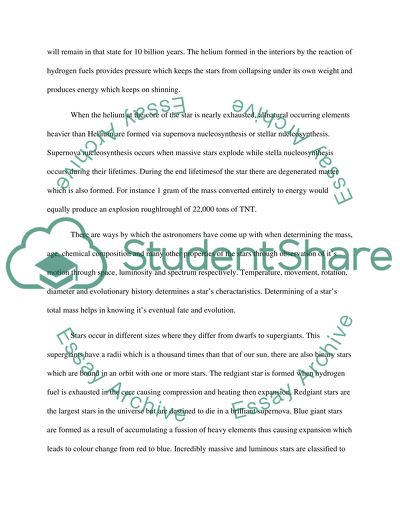 Extract of sample "The Life and Death of Stars (Astronomy)"

Download file to see previous pages Most prominent stars were grouped together and brightest of them all were given names. The grouping of stars also helped the astronomy to track motion and positions of other heavenly bodies .It was by this tracking that an idea came up of creating calendars where their used the motion of sun against the background stars. The widely used calendar in the world, The Gregorian Calendar, Which was based on the angle of earth’s rotational axis and the sun.How was the star formed according to the astronomys? All stars are born from collapsing dust and cloud of gases which are concentrated at temperatures for a period of years. When the protostars settles down at an average temperatures to form a main sequence star. Most of it’s life the stars uses nuclear fusion which is generated through fusion of hydrogen atoms at the core of main sequence star. The reason behind ganging up of stars in pairs or multiple around the milk way maybe because of the spinning dust and clouds of collapsing dust causing a break up of two or three blobs.
During formation of a star not all gas and dust is used up, The remaining materials becomes planets, comets, asteroids or may remain as dust. For a star to be as big as the sun it requires 50 million years from the beginning of the collapse till adulthood,where else our sun will remain in that state for 10 billion years. The helium formed in the interiors by the reaction of hydrogen fuels provides pressure which keeps the stars from collapsing under its own weight and produces energy which keeps on shinning.
When the helium at the core of the star is nearly exhausted, allnatural occurring elements heavier than Hellium are formed via supernova nucleosynthesis or stellar nucleosynthesis. Supernova nucleosynthesis occurs when massive stars explode while stella nucleosynthesis occurs during their lifetimes. During the end lifetimesof the star there ...Download file to see next pagesRead More
Share:
Tags
Cite this document
(“The Life and Death of Stars (Astronomy) PowerPoint Presentation”, n.d.)
The Life and Death of Stars (Astronomy) PowerPoint Presentation. Retrieved from https://studentshare.org/education/1617702-the-life-and-death-of-stars-astronomy

CHECK THESE SAMPLES OF The Life and Death of Stars (Astronomy)

...The Life and Death of Stars (Astronomy) al Affiliation The Life and Death of Stars (Astronomy) Introduction Vividly stars are component that are seen on the sky. These fascinating components have a time when they are born, time to grow and can stay for a very long time and they also have a time to die. The skies contain gases like the hydrogen gas and dust that join together to form nebula, which is believed to be the birth place of the stars. When are stars born? People who study the stars also known as the Astronomers have come up with fascinating facts that molecular clouds which comprises of the thick dust and the gases are the birth place of stars .Once the hydrogen gas burns to helium gas they form a main star. These main stars...
9 Pages(2250 words)PowerPoint Presentation

Community life has its advantages but also has its limitations to the members and the outsiders.
“The good things we secure for ourselves are uncertain and precious until it is secured for everyone and incorporated into our common life.”-Jane Addams. With society moving faster and more detached to technology, busy schedules, and job changes, it becomes harder and harder to feel a sense of community. This can result in a life of solitude and a lose a sense of belonging. Community life helps extract people out of this solitude life and introduce better, challenging and fun tasks such as participation in acts of kindness. It also provides room for volunteering, meeting neighbors, discussing important issues with othe...
7 Pages(1750 words)Case Study
sponsored ads
Save Your Time for More Important Things
Let us write or edit the powerpoint presentation on your topic "The Life and Death of Stars (Astronomy)" with a personal 20% discount.
GRAB THE BEST PAPER

Let us find you another PowerPoint Presentation on topic The Life and Death of Stars (Astronomy) for FREE!