Comments (0)
Add to wishlistDelete from wishlist
Cite this document
Summary
The writer of this essay discusses an application letter to the Duke University School of Medicine. So, the writer analyses information on the most important community service/volunteer activities in which he has been involved and how participation has in these activities impacted his preparation for a career in medicine…
Download full paperFile format: .doc, available for editing
HIDE THIS PAPERGRAB THE BEST PAPER98% of users find it useful 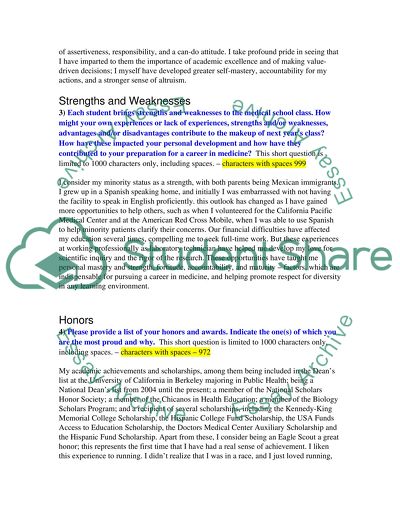 Download file to see previous pages This has entailed preparing activities that would help them deal with critical juvenile issues such as drugs, peer pressure, and violence. Another would be my membership the Chicanos in Health Education, in which I helped organize the annual Raza Health Fair; this allowed me to develop leadership skills and at the same time reinforce my interest in the healthcare profession. My membership to the Center for Science Excellence has given me the opportunity to share my knowledge in Chemistry and microbiology to fellow students through tutoring sessions. My volunteer experience with the American Red Cross Bloodmobile has allowed me to interact with a multicultural community, and to use my proficiency in the Spanish language in helping patients comprehend instructions or clarify their issues. These have helped strengthen my resolve in pursuing a medical degree.
I have worked as a tutor-mentor at the Making Changes Freedom School, which is a completely volunteer-run, grassroots movement of community members who sincerely want to make an authentic, positive difference in lives of elementary and high school students. This opportunity has allowed me to interact with a diverse, multicultural group, and be passionately involved in helping these youths bravely confront the challenges of their day, including drugs, peer pressure, violence and alcohol. Apart from academic excellence, I have independently designed activities that helped instill in them the values of assertiveness, responsibility, and a can-do attitude.   ...Download file to see next pagesRead More
Share:
Tags
Cite this document
(“Medical School for Duke University School of Medicine Admission/Application Essay”, n.d.)
Medical School for Duke University School of Medicine Admission/Application Essay. Retrieved from https://studentshare.org/education/1535078-medical-school-essays

D. Smooth muscle cells: Though smooth muscle cells are recruited by day 3 or 4 of the wound along with fibroblasts, myofibroblasts, pericytes, and smooth muscle cells, their main role is fibroplasia, synthesis of connective tissue matrix, tissue remodeling, wound contraction, and wound strength. They do not produce cytokines and chemoattractants (Sephel, 72). Hence this is not the correct answer.
A 68-year-old man with prostate cancer and bone metastases presents with shaking chills and fever. The peripheral WBC count is 1,000/uL (normal = 4,000-11,000/uL). Which of the following terms best describes this hematologic finding?
A. Leukocytosis: This is not the correct answer because leukocytosis means an increase in WBC co...
14 Pages(3500 words)Case Study

The federal government, through the 2009’s Controlled Substances Act, makes the use of marijuana a criminal offense. However, various states, such as Arizona, Colorado, and California, have legalized the use of cannabis for therapeutic purposes. This paper presents an argument that marijuana should be made legal for its therapeutic uses.
The legalization of medical cannabis is justified because of the positive therapeutic effects of the drug. Proponents of the legalization of medical cannabis argue that if marijuana is made illegal, patients will not be able to access and use it for the relief of their symptoms (Gwynne 29). Marijuana has been reported to be a safe drug for the treatment of various conditions. The drug a...
6 Pages(1500 words)Case Study
sponsored ads
Save Your Time for More Important Things
Let us write or edit the admission/application essay on your topic "Medical School for Duke University School of Medicine" with a personal 20% discount.
GRAB THE BEST PAPER

Let us find you another Admission/Application Essay on topic Medical School for Duke University School of Medicine for FREE!