The Importance of Phonetics & Phonology in English - Assignment Example

Comments (1)
Add to wishlistDelete from wishlist
Cite this document
Summary
This assignment discusses English segments of phonetics and phonology. The assignment considers the elimination of a phonemic distinction in a particular phonological context. Also, the assignment discusses the effects of the biomechanical performance properties of the vocal tract…
Download full paperFile format: .doc, available for editing
HIDE THIS PAPERGRAB THE BEST PAPER96.3% of users find it useful 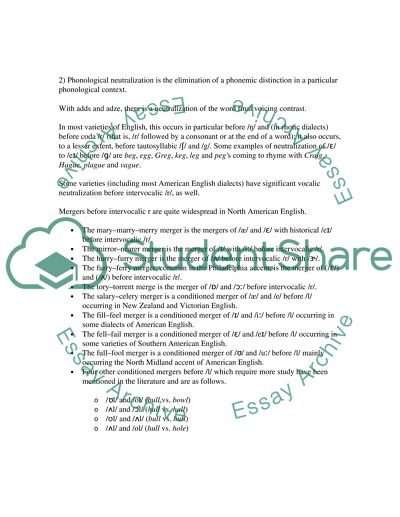 Extract of sample "The Importance of Phonetics & Phonology in English"

1) Context sensitive variation of speech - 2 basic types can be distinguished the effects of the biomechanical performance properties of the vocal tract and 2) the effects of the nature and organization of the neuromuscular control mechanisms which actuate articulator movements.
English does not normally have nasalized sounds - but vowels preceding nasal consonants in English, as in sand or can't or bend, may well be nasalized because of the following consonant. Many English segments may be articulated in certain contexts as sounds from which they are normally distinguished. [s] is distinguished from [sh] in English, but [s] may be articulated as [sh] in an appropriate context, i.e. when [s] precedes [j], as in this year, or tissue. These distinctions usually go unnoticed within the community if they occur regularly, but can attract attention by those of the non-English speaking community, or those learning English.
The effect of delay on articulator movement can be seen in English words such as more and now, where the beginning of the vowel is nasalized, partly because of the delay in raising the velum at the end of the nasal consonant. The nasality of the initial consonant thus overlaps onto the following oral vowel. A similar effect tends to nasalize the voiced fricative following [n] in such words as burns and bronze.
2) Phonological neutralization is the elimination of a phonemic distinction in a particular phonological context.
With adds and adze, there is a neutralization of the word final voicing contrast.
In most varieties of English, this occurs in particular before // and (in rhotic dialects) before coda /r/ (that is, /r/ followed by a consonant or at the end of a word); it also occurs, to a lesser extent, before tautosyllabic // and /g/. Some examples of neutralization of // to /e/ before // are beg, egg, Greg, keg, leg and peg's coming to rhyme with Craig, Hague, plague and vague.
Some varieties (including most American English dialects) have significant vocalic neutralization before intervocalic /r/, as well.
Mergers before intervocalic r are quite widespread in North American English.
The mary-marry-merry merger is the mergers of // and // with historical /e/ before intervocalic /r/.
The mirror-nearer merger is the merger of // with /i/ before intervocalic /r/.
The hurry-furry merger is the merger of // before intervocalic /r/ with //.
The furry-ferry merger, common in the Philadelphia accent, is the merger of (//) and (//) before intervocalic /r/.
The tory-torrent merge is the merger of // and // before intervocalic /r/.
The salary-celery merger is a conditioned merger of // and /e/ before /l/ occurring in New Zealand and Victorian English.
The fill-feel merger is a conditioned merger of // and /i/ before /l/ occurring in some dialects of American English.
The fell-fail merger is a conditioned merger of // and /e/ before /l/ occurring in some varieties of Southern American English.
The full-fool merger is a conditioned merger of // and /u/ before /l/ mainly occurring the North Midland accent of American English.
Four other conditioned mergers before /l/ which require more study have been mentioned in the literature and are as follows.
/l/ and /ol/ (bull vs. bowl)
/l/ and /l/ (hull vs. hall)
/l/ and /l/ (bull vs. hull)
/l/ and /ol/ (hull vs. hole) Read More
Share:
Tags
Cite this document
(“The Importance of Phonetics & Phonology in English Assignment”, n.d.)
The Importance of Phonetics & Phonology in English Assignment. Retrieved from https://studentshare.org/education/1521649-phonology-high-school-essay

“The Importance of Phonetics & Phonology in English Assignment”, n.d. https://studentshare.org/education/1521649-phonology-high-school-essay.
Comments (1)
Click to create a comment or rate a document

oh
oharadan added comment 11 months ago
Student rated this paper as
I had an issue with a assignment types of works. All until I came across this website and this particular document. Even though "The Importance of Phonetics & Phonology in English" is far from my interests, the structure is so great that I use it all the time as an example for my own works.

CHECK THESE SAMPLES OF The Importance of Phonetics & Phonology in English

...? Phonetics Number: Phonetics Phonetics refers to a branch of linguistics, which comprises of the study of the sounds related to human speech, or the corresponding aspects of sign in case of sign languages (Bickford, 2006). Phonetics is concerned with the physical aspects of speech signs or sounds (phones), acoustic properties, their physiological production, auditory awareness, and neurophysiological condition. Phonology, on the other hand, is related to the abstract and grammatical characterization of systems of sounds or signs. Phonics lessons generate the best results for enhancing language. This paper will focus on one aspect of phonetics, Articulatory Phonetics, and create a lesson plan for English Language Learners (ELLs...
4 Pages(1000 words)Essay

...Sonober Abidi Lane Phonetics October 31, 2008 Lesson Plan in Phonetics This lesson plan is intended for Bisun, a Hindu and Dimitry, a Russian. The paper shall present the diagnostic speech and the analysis of the speech problems of Bisun and Dimitry. A one-hour lesson for them is then presented. Below are the transcriptions of the speeches of the two students: Bisun, Hindu This (i) is free speaking homework assignment two. Pause Tickets to see his favorite team play is a good gift (ah) because guys love sports. A tie is a good gift as well because it is romantic (pause) and it also shows that she cares (k) for him. A gift that he can use for his favorite hobby is also a good gift again it shows care (k). Tools is not a good...
8 Pages(2000 words)Essay

Importance Of The Studying English

...﻿Importance Of The Studying English Me fail English? That unpossible! -Ralph Wiggum English is a language that is spoken all over the world today. It has set the precedent for globalization to occur on a far greater scale. I am able to say this more so because coming from a country that does not speak English, I realize the importance placed on this language in my region. Any individual who excels in this language is considered an ambitious and successful person who has learned and exceeded far beyond his own person. It is for this reason that the English language has always held a revered and important position in our household. This essay will continue to explain the value...
2 Pages(500 words)Essay

And when producing pp, the lips will be stretched to produce y. The whole word is uttered in half a second.
Elision: Elision is the loss of a phoneme. I.e. the omission of sounds (vowel/consonant/syllable), so that the speaker can simplify the pronunciation. This usually occurs in a fast speech and is normally unintentional.
Allophone: Allophone is a phonetic variant of a phoneme in a particular language. I.e. it is one of the several speech sounds belonging to the same phoneme. A change in allophone does not alter the meaning, but rather makes the word sound non-native.
Minimal pairs enable the linguists to build up the phoneme inventory for a language or a dialect. Though the words differ by only one segment, ther...
4 Pages(1000 words)Case Study

s new ground in addressing the interrelationship between classic linguistic theory, phonetics and phonological theory to propose a new model of sound patterns, which moves away from some of the assumptions of the previous synchronistic approach. In doing so Blevins’ evolutionary model undertakes a detailed examination of variations in sound patterns and sound changes over a period of 7,000 to 8,000 years and uses this time period to address the similarities between genetically unrelated languages (Blevins 1).
“One of multiple mechanisms leading to regular sound change and regular sound patterns. Within evolutionary phonology, as in traditional neogrammarian models, variability along the hyper-to-hypoarticulation continuum pro...
39 Pages(9750 words)Essay

The Phonology and Semantics of the English Language

This paper examines the nature and purpose of the traditional system of phonetic notation and analysis which is based upon units of analysis called “segments”. It outlines the usefulness of this concept, and also its limitations, especially in the light of modern technologies which provide a wealth of very detailed scientific data on how sounds are produced by the human organs of speech. The concept of “coarticulation” is presented against the background of these traditional and more modern methodologies for analysing human speech, and finally Laver’s (1994) view of coarticulation is evaluated in depth using examples from English and a few other languages.
When a person speaks in any human language the sound emerges in a strea...
12 Pages(3000 words)Essay

Let us find you another Assignment on topic The Importance of Phonetics & Phonology in English for FREE!