Comments (1)
Add to wishlistDelete from wishlist
Cite this document
Summary
Within the last fifty years, more than 9o% of total coral reefs in Indonesia has been destroyed being a product of unsustainable management and destructive activities like over-fishing, terrestrial pollution, sedimentation and coral mining. …
Download full paperFile format: .doc, available for editing
HIDE THIS PAPERGRAB THE BEST PAPER97.8% of users find it useful 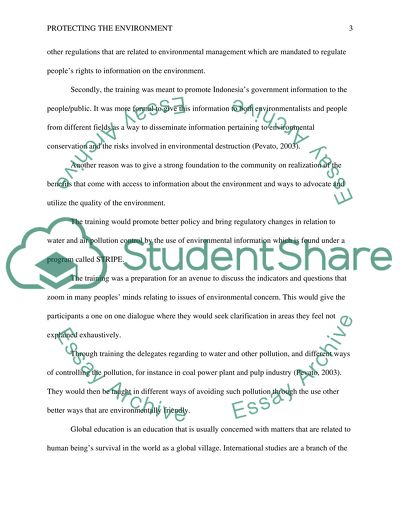 Extract of sample "Protecting the Environment: Training in Environmental Law in Indonesia"

Download file to see previous pages The Indonesian mangrove fore’s, which initially covered more than 3.7 million hectares of land in Indonesia back in 1993, has been reduced to 1.5 million hectares according to a report released in 2005. This shows that there has been a 59% decrease in the total mangrove covered land in duration of less than twelve years.
Reasons for training on Environmental Law
The main reason why the seminar on protecting the environment and training in environmental law was a way of promoting the Public Information Disclosure Act (PIDA) and other regulations that are related to environmental management which are mandated to regulate people’s rights to information on the environment.
Secondly, the training was meant to promote Indonesia’s government information to the people/public. It was more formal to give this information to both environmentalists and people from different fields as a way to disseminate information pertaining to environmental conservation and the risks involved in environmental destruction (Pevato, 2003).
Another reason was to give a strong foundation to the community on realization of the benefits that come with access to information about the environment and ways to advocate and utilize the quality of the environment.
The training would promote better policy and bring regulatory changes in relation to water and air pollution control by the use of environmental information which is found under a program called STRIPE.
The training was a preparation for an avenue to discuss the indicators and questions that zoom in many peoples’ minds relating to issues of environmental concern. This would give the participants a one on one dialogue where they would seek clarification in areas they feel not explained exhaustively. Through training the delegates regarding to water and other pollution, and different ways of controlling the pollution, for instance in coal power plant and pulp industry (Pevato, 2003). They would then be taught in different ways of avoiding such pollution through the use other better ways that are environmentally friendly. Global education is an education that is usually concerned with matters that are related to human being’s survival in the world as a global village. International studies are a branch of the broad global education where global education shows how human beings interdepend and the fate they all share regardless of the nation where they live. Many learners have continuously confused between global education and multicultural studies. Multicultural education specializes in the study of diverse ethnic groups within some geographic boundaries, such as a nation. Each year, individual human issues grow to become global issues as human seek to be employed, use and abuse air, acquire resources, change ...Download file to see next pagesRead More
Share:
Tags
Cite this document
(“Protecting the Environment: Training in Environmental Law in Indonesia Assignment”, n.d.)
Protecting the Environment: Training in Environmental Law in Indonesia Assignment. Retrieved from https://studentshare.org/education/1475795-protecting-the-environment-training-in

“Protecting the Environment: Training in Environmental Law in Indonesia Assignment”, n.d. https://studentshare.org/education/1475795-protecting-the-environment-training-in.
Comments (1)
Click to create a comment or rate a document

fa
favian82 added comment 10 months ago
Student rated this paper as
Excellent paper! Used it to complete an assignment for a education course. It was easy as ABC, for the first time in my life.

CHECK THESE SAMPLES OF Protecting the Environment: Training in Environmental Law in Indonesia

New and complex issues have arisen which demanded fresh understanding and handling of cases involved them. This has resulted in the enhanced development of specialized laws e.g. cyber laws and interpretation of those laws. The same is true with Media Laws. Media has developed much in the last half-century. As it evolved as a profession and more people started to join it, there arose the levels of money involved in it. With this grew the contractual obligations on the parts of parties and concerned laws e.g. patent laws, privacy laws, and copyrights laws, etc. also started to play their parts. With these issues, the role of law in the media industry also reached a new height.
Mathew Fisher, the appellant, joined a band with Mr...
6 Pages(1500 words)Assignment
sponsored ads
Save Your Time for More Important Things
Let us write or edit the assignment on your topic "Protecting the Environment: Training in Environmental Law in Indonesia" with a personal 20% discount.
GRAB THE BEST PAPER

Let us find you another Assignment on topic Protecting the Environment: Training in Environmental Law in Indonesia for FREE!