Comments (0)
Add to wishlistDelete from wishlist
Cite this document
Summary
The author of the following document "A Review of Personal Progress" seeks to design a self-assessment program aimed to facilitate the process of conducting a critical analysis of the progress of academic performance and personal development overall…
Download full paperFile format: .doc, available for editing
HIDE THIS PAPERGRAB THE BEST PAPER98.5% of users find it useful 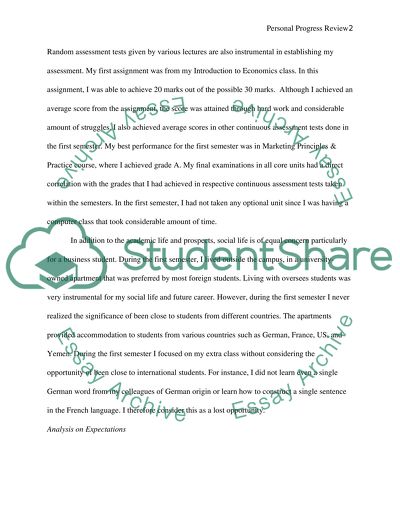 Extract of sample "A Review of Progress"

Download file to see previous pages The goals and objectives remain constant despite fluctuations in priorities. The course objectives given by the lecturers at the beginning of every course were also instrumental in measuring my progress and current position. The main objective of enrolling in UEL business school was the need of been above the bottom line (UEL, 2000). However, it is evident that academic performance is not the only, measure of personal progress for any student in any learning institution. This essay will, therefore, analyze my personal progress based on the first semester results and future expectations. Current Position The current position is instrumental in establishing future progress and measuring my past performances. From a general perspective, it is evident that I am in a fair position in both academic and extracurricular activities. However, these performances do not comply with UEL School of Business maxim of been above the bottom line or been above average. In addition, having a fair performance indicates lack of consistence of performance in different courses. This requires a specialized analysis of performance at each of the key areas. In addition to the final exams, I have done several assignments as part of the school’s continuous assessment program. Random assessment tests given by various lectures are also instrumental in establishing my assessment. My first assignment was from my Introduction to Economics class. In this assignment, I was able to achieve 20 marks out of the possible 30 marks. Although I achieved an average score from the assignment, the score was attained through hard work and a considerable amount of struggles. I also achieved average scores in other continuous assessment tests done in the first semester.
My best performance for the first semester was in Marketing Principles & Practice course, where I achieved grade A. My final examinations in all core units had a direct correlation with the grades that I had achieved in respective continuous assessment tests taken within the semesters. In the first semester, I had not taken any optional unit since I was having a computer class that took a considerable amount of time. In addition to the academic life and prospects, social life is of equal concern, particularly for a business student. During the first semester, I lived outside the campus, in a university-owned apartment that was preferred by most foreign students. Living with oversees students was very instrumental in my social life and future career. However, during the first semester, I never realized the significance of been close to students from different countries. The apartments provided accommodation to students from various countries such as German, France, the US, and Yemen. During the first semester, I focused on my extra class without considering the opportunity of been close to international students. For instance, I did not learn even a single German word from my colleagues of German origin or learn how to construct a single sentence in the French language. I, therefore, consider this as a lost opportunity.  ...Download file to see next pagesRead More
Share:
Tags
Cite this document
(A Review of Personal Progress Statement Example | Topics and Well Written Essays - 1500 words, n.d.)
A Review of Personal Progress Statement Example | Topics and Well Written Essays - 1500 words. Retrieved from https://studentshare.org/education/1452567-prepare-an-essay-of-no-more-than

CHECK THESE SAMPLES OF A Review of Personal Progress

Many channels mean many programs and talk shows; this leads to an infinite number of programs one can see in his life. These programs on air a tremendous knowledge as well as a series of propaganda and rumors against some specific community, society, country or culture. In fact, today’s generation blindly believes and is completely driven by the fact given by the television.
No invention of science is all good or all bad, but the use totally depends on the user. Some watch TV as a source of their everyday knowledge while others watch for the sake of entertainment. Both uses hold a significant position in one’s life.
Scientists and specialists can definitely argue over the positive and negative influences of T...
7 Pages(1750 words)Case Study
sponsored ads
Save Your Time for More Important Things
Let us write or edit the personal statement on your topic "A Review of Personal Progress" with a personal 20% discount.
GRAB THE BEST PAPER

Let us find you another Personal Statement on topic A Review of Personal Progress for FREE!