Comments (0)
Add to wishlistDelete from wishlist
Cite this document
Summary
The Social Studies Curriculum in Alberta, Canada Introduction Social study is a branch of academics related to inter-human interactions. According to a definition by Wesley “social study is the social science simplified for pedagogical purposes” a second definition is given as “unitary field comprised of materials from various disciplines, regardless of discipline boundaries, which is centered on the needs of students and society.” (Alahwiti 2007) .In Alberta Province of Canada it was considered that social studies curriculum in schools was not written and taught on modern basis, in line with requirements of twentyfirst century…
Download full paperFile format: .doc, available for editing
HIDE THIS PAPERGRAB THE BEST PAPER92.5% of users find it useful 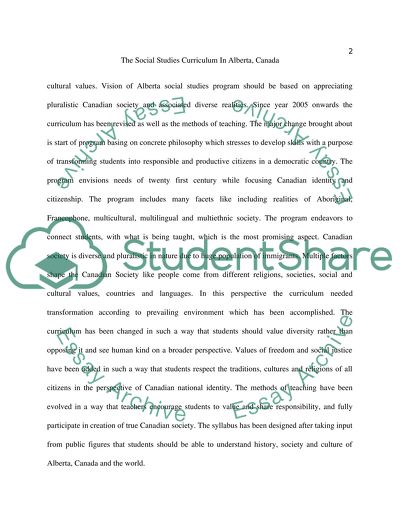 Extract of sample "The Social Studies Curriculum in Alberta, Canada"

Download file to see previous pages Dramatic Change In The Social Studies Curriculum Of Alberta With respect to Canadian – Alberta framework of citizenship a social studies program or curriculum should explore, quantify and strengthen Canadian identity of students. Within Alberta citizenship framework a social study program should reflect translate Aboriginal and Francophone perspective as well which is close to ground realities. In a nutshell the program or curriculum should promote multicultural, multiethnic, democratic and truly Canadian social and cultural values. Vision of Alberta social studies program should be based on appreciating pluralistic Canadian society and associated diverse realities. Since year 2005 onwards the curriculum has been revised as well as the methods of teaching. The major change brought about is start of program basing on concrete philosophy which stresses to develop skills with a purpose of transforming students into responsible and productive citizens in a democratic country. The program envisions needs of twenty first century while focusing Canadian identity and citizenship. The program includes many facets like including realities of Aboriginal, Francophone, multicultural, multilingual and multiethnic society. The program endeavors to connect students, with what is being taught, which is the most promising aspect. Canadian society is diverse and pluralistic in nature due to huge population of immigrants. Multiple factors shape the Canadian Society like people come from different religions, societies, social and cultural values, countries and languages. In this perspective the curriculum needed transformation according to prevailing environment which has been accomplished. The curriculum has been changed in such a way that students should value diversity rather than opposing it and see human kind on a broader perspective. Values of freedom and social justice have been added in such a way that students respect the traditions, cultures and religions of all citizens in the perspective of Canadian national identity. The methods of teaching have been evolved in a way that teachers encourage students to value and share responsibility, and fully participate in creation of true Canadian society. The syllabus has been designed after taking input from public figures that students should be able to understand history, society and culture of Alberta, Canada and the world. Now the curriculum aims at understanding dynamics of a pluralistic society and conflict resolution in such a unique society. The program encourages the students in thinking about issues related to society in Alberta and problem solving. Students are guided to translate complex social issues, draw meanings and arrive at genuine conclusions. The program lays stress on cognitive skills and effective learning while connecting them to real issues, own history and land of Canada. The relationship between citizenship and Canadian identity is the basic ingredient of program. The social studies program in Alberta stresses a lot on citizenship, respect for rights and identity of all citizens. A citizen ...Download file to see next pagesRead More
Share:
Tags
Cite this document
(“The Social Studies Curriculum in Alberta, Canada Research Paper”, n.d.)
The Social Studies Curriculum in Alberta, Canada Research Paper. Retrieved from https://studentshare.org/education/1444684-the-social-studies-curriculum-in-alberta-canada
(The Social Studies Curriculum in Alberta, Canada Research Paper)
The Social Studies Curriculum in Alberta, Canada Research Paper. https://studentshare.org/education/1444684-the-social-studies-curriculum-in-alberta-canada.
“The Social Studies Curriculum in Alberta, Canada Research Paper”, n.d. https://studentshare.org/education/1444684-the-social-studies-curriculum-in-alberta-canada.
Comments (0)
Click to create a comment or rate a document

CHECK THESE SAMPLES OF The Social Studies Curriculum in Alberta, Canada

Erving Goffman was an astute observer of society, who immersed himself in the social environment which he was studying. He carefully observed and recorded the ways in which people’s behavior and interpersonal interactions are carried out in everyday life. He notes that “people perform their social roles and, as they do so, they produce social order through their actions and the regu...
6 Pages(1500 words)Article
sponsored ads
Save Your Time for More Important Things
Let us write or edit the research paper on your topic "The Social Studies Curriculum in Alberta, Canada" with a personal 20% discount.
GRAB THE BEST PAPER

Let us find you another Research Paper on topic The Social Studies Curriculum in Alberta, Canada for FREE!