Why I Need to Study Law - Scholarship Essay Example

Comments (0)
Add to wishlistDelete from wishlist
Cite this document
Summary
The paper "Why I Need to Study Law" discusses that the life of the law has not been logic; it has been the reason. Studying Law will enhance the author's critical thinking and good reasoning ability. It can also make him an informed citizen and help understand society’s justice system better…
Download full paperFile format: .doc, available for editing
HIDE THIS PAPERGRAB THE BEST PAPER94.3% of users find it useful 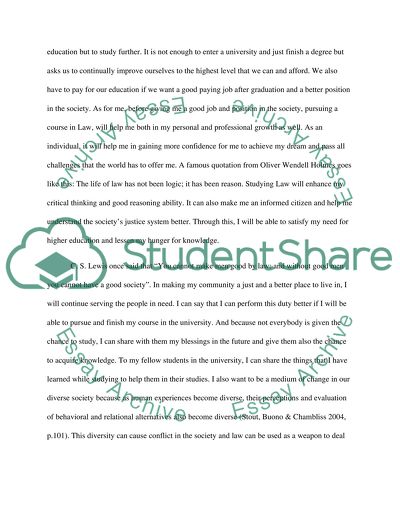 Extract of sample "Why I Need to Study Law"

Download file to see previous pages Education was once a basic necessity provided by the government to its people; it is given a large portion of the national budget. But in our ever-changing world, the government has to withdraw its support for higher education and tuition fees have to be increased. We have to accept the fact that not everyone in our society is given the chance to have the education they need and deserve.
I am lucky to have enough education to be the kind of man I am now. I was able to finish a degree in Business and the opportunity to take my chance in taking up Law. The awards and experiences that I had during my earlier years in school will be very helpful in my future days at the university. Being a member of the debates team has taught me to see and analyze situations clearly. I had to think critically before arriving at a conclusion and express my opinions in the best way I can. Challenges are also part of my everyday life at school. To be a committee member of the English Language Society has challenged me to be good at something I am not used to. But the courage to pursue something has become my weapon in order to win the battle. I became a good speaker of the language and now I can communicate and express myself better.
Our world now is becoming demanding. And over time, society’s needs and wants change and tend to multiply (McConnell & Brue 2005, p.23). It now requires more knowledge and skills for us to continue our existence. ...Download file to see next pagesRead More
Share:
Tags
Cite this document
(“Why I Need to Study Law Scholarship Essay Example | Topics and Well Written Essays - 500 words”, n.d.)
Why I Need to Study Law Scholarship Essay Example | Topics and Well Written Essays - 500 words. Retrieved from https://studentshare.org/education/1407759-scholarship-essay

CHECK THESE SAMPLES OF Why I Need to Study Law

In th...
8 Pages(2000 words)Case Study
sponsored ads
Save Your Time for More Important Things
Let us write or edit the scholarship essay on your topic "Why I Need to Study Law" with a personal 20% discount.
GRAB THE BEST PAPER

Let us find you another Scholarship Essay on topic Why I Need to Study Law for FREE!