Comments (0)
Add to wishlistDelete from wishlist
Cite this document
Summary
The aspect or notion of bullying has been measured to be an extensive problem that exists in the communities and especially in the schools. It needs to be stated in this context that bullying is considered to create an adverse impact on the environment prevailing in the schools and on the individual students as well…
Download full paperFile format: .doc, available for editing
HIDE THIS PAPERGRAB THE BEST PAPER91.3% of users find it useful 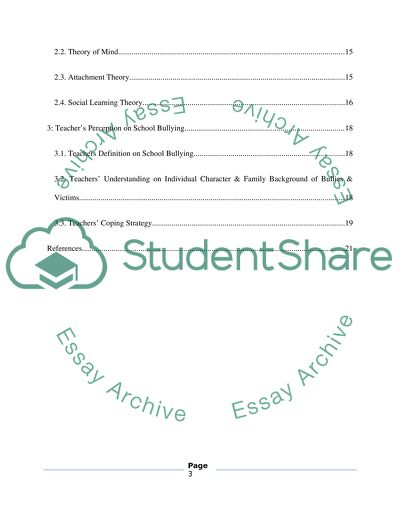 Download file to see previous pages The concept of bullying was perceived at a certain point of time to be a ritual in relation to passage or rather a harmless form of conduct that aided in forming characters in the young age. However, presently this particular idea of bullying is considered to pose long-term physical, emotional and academic consequences on the bully as well as on the victim (Blazer, 2005).
The increasing rate of bullying activities is gradually emerging to be a grave matter for numerous elementary students. Bullying is identified to be amongst the triggering factors of violence which calls for the immediate correction for this kind of a behaviour. The conduct of bullying is often regarded to be a form of personal conducts which is acquired from the surroundings. Therefore, it implies that bullying, being a learning behaviour, makes it competent of being assessed and altered according to the needed requirements that get deciphered from the evaluation (Blazer, 2005).

According to Olweus (1996), a student is found to fall a victim to bullying behaviour when that specific individual constantly remains open to the elements related to abusive activities or nuisances and irritations caused by the other students. The main intention behind such kind of bullying activities is believed to be the foremost concern of gaining dominance and power over the other students or the individuals. Majorly, three different forms of bullying behaviour has been identified which entails physical form, verbal form and psychological form. The physical outward appearance of bullying behaviour is known to encompass kicking, pushing, property destruction, hitting, spitting and stealing. In the similar context, the verbal kind of bullying behaviour has been learnt to engage various activities such as depicting malevolent wit, making coercion, screening hurtful behaviour and name calling. Furthermore, the psychological form of bullying activities is found to entail influencing social relationships, extortion, spreading rumors, intimidation and segregation from a certain peer group (Blazer, 2005; Cohn & Canter, 2003). The aspect of this particular kind of behaviour, i.e. bullying, is learnt to engage two vital constituents that have been recognised as the psychological or the physical form of threats often found to take place frequently with time along with the factor of power imbalance. It becomes quite imperative to be mentioned in this respect that there are certain kinds of behaviours ...Download file to see next pagesRead More
Share:
Tags
Cite this document
(“Middle School Teachers' Understanding of School Bullying in Mainland Literature review”, n.d.)
Middle School Teachers' Understanding of School Bullying in Mainland Literature review. Retrieved from https://studentshare.org/education/1399810-middle-school-teachers-understanding-of-school-bullying-in-mainland-china

Approximately one-half of school social workers are found to be practicing with elementary school children. School social workers support and help to prevent future problems by intervening with at-risk children during elementary schoo...
11 Pages(2750 words)Case Study
sponsored ads
Save Your Time for More Important Things
Let us write or edit the literature review on your topic "Middle School Teachers' Understanding of School Bullying in Mainland China" with a personal 20% discount.
GRAB THE BEST PAPER

Let us find you another Literature review on topic Middle School Teachers' Understanding of School Bullying in Mainland China for FREE!