Comments (0)
Add to wishlistDelete from wishlist
Cite this document
Summary
The Development of Islamic Law and its Role in Contemporary Pakistan Michael Cox Class: Culture and Society of South Asia Word Count: 2,521 Outline Introduction 3 The Development of Islamic Pakistan 3 Pakistan’s Turbulent Leadership 5 Realigning Pakistani Law 7 Conclusion 10 Bibliography 10 Introduction Contemporary Pakistan has been a state of much international interest, close to both Russia and China, despite the fact that it has a small area, roughly twice that of California (Talbot, 1998, p…
Download full paperFile format: .doc, available for editing
HIDE THIS PAPERGRAB THE BEST PAPER97.1% of users find it useful 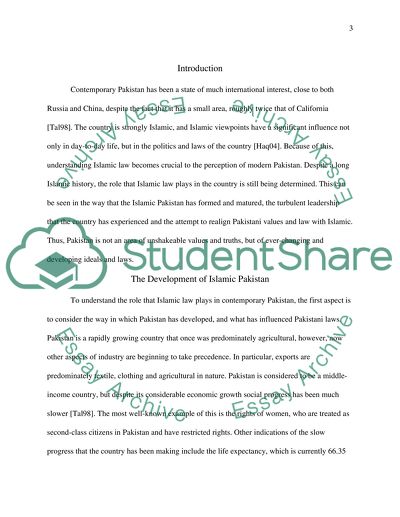 Download file to see previous pages Despite a long Islamic history, the role that Islamic law plays in the country is still being determined. This can be seen in the way that the Islamic Pakistan has formed and matured, the turbulent leadership that the country has experienced and the attempt to realign Pakistani values and law with Islamic. Thus, Pakistan is not an area of unshakeable values and truths, but of ever-changing and developing ideals and laws. The Development of Islamic Pakistan To understand the role that Islamic law plays in contemporary Pakistan, the first aspect is to consider the way in which Pakistan has developed, and what has influenced Pakistani laws. Pakistan is a rapidly growing country that once was predominately agricultural, however, now other aspects of industry are beginning to take precedence. In particular, exports are predominately textile, clothing and agricultural in nature. Pakistan is considered to be a middle-income country, but despite its considerable economic growth social progress has been much slower (Talbot, 1998, p. 23). The most well-known example of this is the rights of women, who are treated as second-class citizens in Pakistan and have restricted rights. Other indications of the slow progress that the country has been making include the life expectancy, which is currently 66.35 years and the fact that less than three percent of the country’s gross domestic product is spent on healthcare (Central Intelligence Agency, 2012). It is thought that part of the driving force behind this slow civil growth is the strong focus on religion and tendency to get involved in religious politics. This can be seen by a strong focus on spending in defense, despite the clear inadequacies in health and education spending (Talbot, 1998, p. 23). Pakistan achieved independence from Britain in the early years after the Second World War. From this point onwards, the nation called itself The Islamic Republic of Pakistan (Korson, 1974, p. 1). Pakistan presents an interesting case in the eastern world, as the nation was initially developed in the name of religion, despite the concept that such nationalism was un-Islamic and represented a betrayal to the ideas and ideas of Islam (Talbot, 1998, p. 12). Thus, Islamic religion has always played an important role in the development of the country, although the exact role has varied as different governments have come into power. In fact, the development of Islam as the ideology for the state was not initially undertaken because of a desire to follow Islamic teaching. Instead, Pakistan’s leaders used this as a method of developing and growing the identity of the country following its independence (Haqqani, 2004). Because of this, Islam was not a strong focus of the laws of the country in its early development. Nevertheless, Islamic perceptions have become strongly embedded in the history of Pakistan and in its current identity, particularly in recent times. The values of Pakistan, which have influenced the development of the country as a whole as well as its laws, are strongly based in the Islamic religion (Talbot, 1998, p. 24). Islam is more than a religion that the country abides by, its language and rhetoric has been strongly incorporated into the law. This incorporation has been so strong ...Download file to see next pagesRead More
Share:
Tags
Cite this document
(“The Development of Islamic Law and its Role in Contemporary Pakistan Research Paper”, n.d.)
Retrieved from https://studentshare.org/education/1399429-south-asia-topic
(The Development of Islamic Law and Its Role in Contemporary Pakistan Research Paper)
https://studentshare.org/education/1399429-south-asia-topic.
“The Development of Islamic Law and Its Role in Contemporary Pakistan Research Paper”, n.d. https://studentshare.org/education/1399429-south-asia-topic.
Comments (0)
Click to create a comment or rate a document

In th...
8 Pages(2000 words)Case Study
sponsored ads
Save Your Time for More Important Things
Let us write or edit the research paper on your topic "The Development of Islamic Law and its Role in Contemporary Pakistan" with a personal 20% discount.
GRAB THE BEST PAPER

Let us find you another Research Paper on topic The Development of Islamic Law and its Role in Contemporary Pakistan for FREE!