Comments (1)
Add to wishlistDelete from wishlist
Cite this document
Summary
Approaches to Second Language Acquisition. Error Analysis and English Language Writing.
The need and urge to communicate with others in the society is the most dominating factor that influences and accelerates the learning process of first language. …
Download full paperFile format: .doc, available for editing
HIDE THIS PAPERGRAB THE BEST PAPER92% of users find it useful 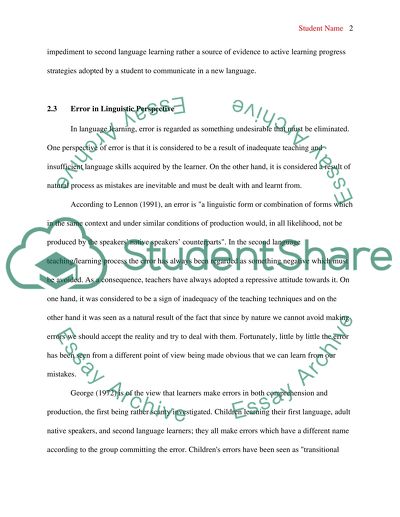 Download file to see previous pages Formal class room learning of a second language presents many barriers to the learner because learner had already acquired his first language and uses it most effectively to communicate in the class room. This gives a psychological disadvantage to the learner clinching to and always ready to fall back on first language in case complex scenarios occur (Yule, 1985). Thus Steinberg (1982) argues that it is quite possible that second language learning process is accelerated if the learner is provided with an environment presenting stimuli through socialization with speakers of target language.
Yule (1985) and Brown (1994) identified age as another barrier to second language acquisition (SLA), which they referred to as critical period. According to them, there is a certain age limit that allows a learner to demonstrate optimal language acquisition skill, beyond what is very difficult to learn another language.
Approaches to Second Language Acquisition
Different models and analytical approaches are employed by researchers in second language acquisition. This included the grammar translation method, the direct method, the audio-lingual approach and the communicative approach. Yule (1985) gives more importance to communicative approach due to its error tolerances. ...
According to Lennon (1991), an error is "a linguistic form or combination of forms which in the same context and under similar conditions of production would, in all likelihood, not be produced by the speakers' native speakers’ counterparts". In the second language teaching/learning process the error has always been regarded as something negative which must be avoided. As a consequence, teachers have always adopted a repressive attitude towards it. On one hand, it was considered to be a sign of inadequacy of the teaching techniques and on the other hand it was seen as a natural result of the fact that since by nature we cannot avoid making errors we should accept the reality and try to deal with them. Fortunately, little by little the error has been seen from a different point of view being made obvious that we can learn from our mistakes. George (1972) is of the view that learners make errors in both comprehension and production, the first being rather scanty investigated. Children learning their first language, adult native speakers, and second language learners; they all make errors which have a different name according to the group committing the error. Children's errors have been seen as "transitional forms", the errors by native speaker are called "slips of the tongue" and the second language errors are considered unwanted forms. 2.4 Background of Error Analysis Earlier in 1960’s, behaviorist theory formed the basis of second language acquisition, which weighed language acquisition not more than just acquiring set of new language skills. For a considerable period, linguistic research focused on interference of learner’s first language with acquisition of second language. Thus researchers used contrastive analysis to predict the areas that need attention ...Download file to see next pagesRead More
Share:
Tags
Cite this document
(“Approaches to Second Language Acquisition. Error Analysis and English Research Paper”, n.d.)
Retrieved from https://studentshare.org/education/1393742-approaches-to-second-language-acquisition-error-analysis-and-english-language-writing

he
herbert28 added comment 1 year ago
Student rated this paper as
I never thought 5500 words essay could be written in such a free manner. I loved the style of this essay. Will definitely use it for my own work!

While I have been learning French for years, yet, only basic concepts like the meanings, pronunciations, and basic grammar rules are concerned, I want to understand more about the linguistic aspect, especially the morphological one, of the language. This includes the formation processes of French words and how the French internet languages are different from the traditional word-formation processes. I as well want to discover new information on the computer-mediated languages to improve my informal understanding of both English and French. I am also eager to learn more about the morphological word formation so that I can become a better language teacher.
Linguists categorize words as the small units of syntax within a given l...
12 Pages(3000 words)Assignment
sponsored ads
Save Your Time for More Important Things
Let us write or edit the research paper on your topic "Approaches to Second Language Acquisition. Error Analysis and English Language Writing" with a personal 20% discount.
GRAB THE BEST PAPER

Let us find you another Research Paper on topic Approaches to Second Language Acquisition. Error Analysis and English Language Writing for FREE!