Comments (1)
Add to wishlistDelete from wishlist
Cite this document
Summary
In the paper “A Training Program for Persons with Mental Retardation Program” the author examines the Location Learning Test (LLT) is a Mental Status Exam which was published in 2000 and is listed in the Mental Measurements Yearbook…
Download full paperFile format: .doc, available for editing
HIDE THIS PAPERGRAB THE BEST PAPER95.9% of users find it useful 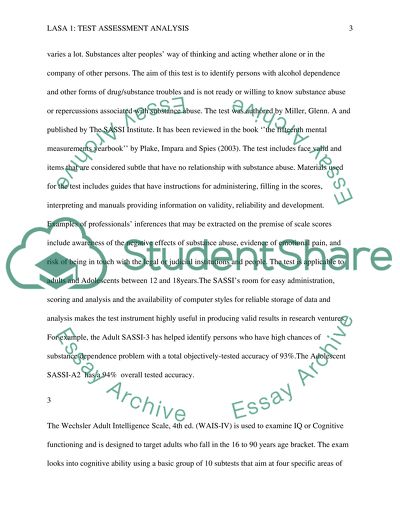 Download file to see previous pages The test development can be traced back to the 1980s. In 1986, there was a trial version of it created by a student pursuing Masters Degree under one of the authors. The test operates on samples of the elderly population. In its first test, normative data was provided differently in groups of respondent ages, (50-69 and 70+ years) and the National Adult Reading Test Estimated IQ (NART-IQ) group (85-89,100-114,115 and above). This test was conducted on 186 men and women (50 to 96) inhabiting England, and the majority of those tested came from Bristol Area. Unfortunately, there is little validity evidence to underscore conclusions made from the LLT experimentation on the elderly people. As said before, the exam is purely conducted on the elderly people though not in groups but as solo individuals. The exam, however, faces criticism due to its minimal levels of validity in evidence purported to have been gathered and therefore not appropriate for clinical applications. (Coughlan. A Hollows, S.p.22) 2 The Substance Abuse Subtle Screening Inventory (SASSI) is developed with the aim to identify people who are most probable to have substance dependence malady (is). The test can be of use in a forensic setting if one wants to know whether an individual’s behavior is dependent on substance dependence. It has been noted that behavioral traits of people dependent on substances vary a lot.
The test was authored by Miller, Glenn. A and published by The SASSI Institute. It has been reviewed in the book ‘’the fifteenth mental measurements yearbook’’ by Plake, Impara, and Spies (2003). The test includes face valid and items that are considered subtle that have no relationship with substance abuse. Materials used for the test includes guides that have instructions for administering, filling in the scores, interpreting and manuals providing information on validity, reliability and development. Examples of professionals’ inferences that may be extracted on the premise of scale scores include awareness of the negative effects of substance abuse, evidence of emotional pain, and risk of being in touch with the legal or judicial institutions and people. The test is applicable to adults and Adolescents between 12 and 18years.The SASSI’s room for easy administration, scoring and analysis and the availability of computer styles for reliable storage of data and analysis makes the test instrument highly useful in producing valid results in research ventures. For example, the Adult SASSI-3 has helped identify persons who have high chances of substance dependence problem with a total objectively-tested accuracy of 93%.The Adolescent SASSI-A2 has a 94% overall tested accuracy. 3 The Wechsler Adult Intelligence Scale, 4th ed. (WAIS-IV) is used to examine IQ or Cognitive functioning and is designed to target adults who fall in the 16 to 90 years age bracket. The exam looks into cognitive ability using a basic group of 10 subtests that aim at four specific areas of intelligence: perceptual reasoning, verbal comprehension, working memory and speed of processing. ...Download file to see next pagesRead More
Share:
Tags
Cite this document
(“A Training Program for Persons with Mental Retardation Program Assignment”, n.d.)
Retrieved de https://studentshare.org/education/1391883-lasa

ki
kiarra23 added comment 1 year ago
Student rated this paper as
This assignment was always my weak point. I could never finish it well. Still, after I found this precise essay, I understood how it should be completed. So, I performed my research afterward and completed the assignment in several hours, instead of months as it was previously.

CF&F has been undertaking a revamp of its entire management set-up to bring back its competitive advantage in the market place. It has changed the top and middle managers by inducting experienced talent from the industry. Internal promotions have been stopped and, even at the supervisory level, fresh engineering graduates have been recruited to boost production and lower costs.

As a result of these changes, the Frontline Supervisors and the regular hourly wage workers are feeling unsecured about their future. The supervisors’ grouse is that the middle management is not interested in decision making and this leaves them vulnerable to the indifference shown by middle managers in their technical and managerial fu...
7 Pages(1750 words)Case Study

Continued physical activities have been demonstrated through medical research to possess massive benefits to people as it assists in the attainment healthy cardio and the elimination of health threats associated with lifestyles. Mental health is the normal state of the mind which facilitates normal thinking and reasoning irrespective of the normal life pressures. Several factors influence the mental health of an individual including consistent physical activity and exercise. In this paper, the impacts of physical exercise on mental health and overall wellbeing will be examined (Dunn, Trivedi & O’Neal, 2001).
In the recent past, the relationship between increased physical activity and the mental health of individuals...
10 Pages(2500 words)Assignment
sponsored ads
Save Your Time for More Important Things
Let us write or edit the assignment on your topic "A Training Program for Persons with Mental Retardation Program" with a personal 20% discount.
GRAB THE BEST PAPER

Let us find you another Assignment on topic A Training Program for Persons with Mental Retardation Program for FREE!