The Business of Beer - Coursework Example

Comments (0)
Add to wishlistDelete from wishlist
Cite this document
Summary
"The Business of Beer" paperstates that the success of light beer is a major example. America’s fascination with weight loss caused beer drinkers to search for alcoholic drinks that have fewer calories and carbs. Because of this, the beer industries promptly acted to cater to its consumer’s needs. …
Download full paperFile format: .doc, available for editing
HIDE THIS PAPERGRAB THE BEST PAPER98.1% of users find it useful 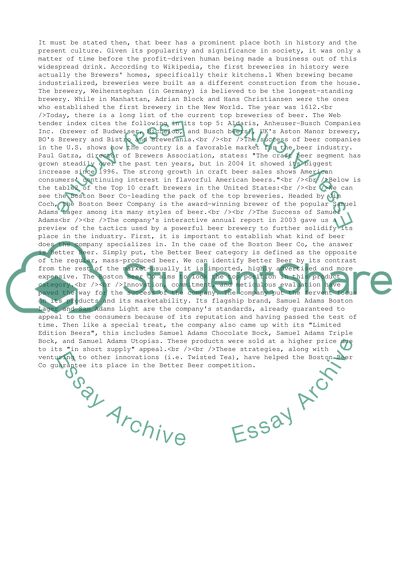 Extract of sample "The Business of Beer"

Download file to see previous pages It must be stated then, that beer has a prominent place both in history and the present culture. Given its popularity and significance in society, it was only a matter of time before the profit-driven human being made a business out of this widespread drink. According to Wikipedia, the first breweries in history were actually the Brewers' homes, specifically their kitchens.1 When brewing became industrialized, breweries were built as a different construction from the house. The brewery, Weihenstephan (in Germany) is believed to be the longest-standing brewery. While in Manhattan, Adrian Block and Hans Christiansen were the ones who established the first brewery in the New World. The year was 1612.
Today, there is a long list of the current top breweries of beer. The Web tender index cites the following in its top 5: Aldaris, Anheuser-Busch Companies Inc. (brewer of Budweiser, Michelob, and Busch beers), UK's Aston Manor brewery, BO's Brewery and Bistro and Brewerania.

The success of beer companies in the U.S. shows how the country is a favorable market for the beer industry. Paul Gatza, director of Brewers Association, states: "The craft beer segment has grown steadily over the past ten years, but in 2004 it showed its biggest increase since 1996. The strong growth in craft beer sales shows American consumers' continuing interest in flavorful American beers."

Below is the table2 of the Top 10 craft brewers in the United States:

The Success of Samuel Adams

The company's interactive annual report in 2003 gave us a preview of the tactics used by a powerful beer brewery to further solidify its place in the industry. First, it is important to establish what kind of beer does the company specializes in. In the case of the Boston Beer Co, the answer is Better Beer. Simply put, the Better Beer category is defined as the opposite of the regular, mass-produced beer. We can identify Better Beer by its contrast from the rest of the market-usually it is imported, highly advertised and more expensive. The Boston Beer Co aims to lock the top position in this product category.

Innovation, commitment, and meticulous evaluation have paved the way for the success of the company. The company put the fervent focus on its products and its marketability. Its flagship brand, Samuel Adams Boston Lager and Sam Adams Light are the company's standards, already guaranteed to appeal to the consumers because of its reputation and having passed the test of time. Then like a special treat, the company also came up with its "Limited Edition Beers", this includes Samuel Adams Chocolate Bock, Samuel Adams Triple Bock, and Samuel Adams Utopias. These products were sold at a higher price due to its "in short supply" appeal.

CHECK THESE SAMPLES OF The Business of Beer

...?Running head: SUPPLY CHAIN MANAGEMENT Beer Game Analysis: Supply Chain Management SUPPLY CHAIN MANAGEMENT 2 Beer Game Analysis: Supply Chain Management 1. There were product shortages and increases in inventory and production costs. In the supply chain world, this is called the “bullwhip effect.” This caused increased variability of demand as orders flow from retailers to factories (upstream). To explain its association to the bullwhip effect, the movements of orders from retailers to factories experience magnification in discrepancy in every step of the upstream ladder. This increased variability of demand resembles the wave amplitude of a cracked whip. The main probable causes of this phenomenon as seen in the graphs are inefficient...
2 Pages(500 words)Essay

...? BEER GAME Contents Contents 2 Introduction 3 Discussion: Logistic challenges in the supply of stationary paper/pen and computers 3 Bullwhip effect 4 Conclusion 5 Reference 6 Introduction The understanding of the web-based beer game could be applied in situations of logistic challenges and the outcome of the decisions taken in order to solve the logistic challenges which could be analyzed. The beer game involves four different components in the distribution system mainly the factory, wholesaler, distributor and retailer. The delay in the distribution of the goods varies in accordance with the change in demand for the goods. The pattern of demand influences the supply of goods that could be expressed by the delay in each of the four stages...
3 Pages(750 words)Essay

The cause for unequal demand for alcohol is simply due to recessionary trails in the global economy. The soaring oil prices have caused a price rise for almost all the final goods and services. Though the money income has increased for buyers, the rising consumption expenses are putting downward pressure in the real income level. The beer and alcohol industry not only generates a significant share of many economies national product, but also spawns large employment opportunities. Thus, analysts and researchers are scared that the fall in production capacities of firms due to recession should not render more individuals jobless. At this juncture, it becomes rational to analyze the business of potential alcohol producing firms like...
9 Pages(2250 words)Case Study

...Introduction Globalization, one of the most hotly debated issues means global capitalism to some while others consider it to be the continuation of modernism with the forces of wealth, progress, democracy and happiness at play (Kellner, 2002). Globalization is considered to be beneficial which promotes economic prosperity, cultural diversity and technological advancement. According to the critical social theory, technology and capital work together to create a new globalized and interconnected world. While each force of globalization is important, technological revolution has impacted the business models, value creation and differentiation (Spelman, 2010). The cloud computing technologies that have made the popular social networking...
7 Pages(1750 words)Coursework
sponsored ads
Save Your Time for More Important Things
Let us write or edit the coursework on your topic "The Business of Beer" with a personal 20% discount.
GRAB THE BEST PAPER

Let us find you another Coursework on topic The Business of Beer for FREE!