Comments (0)
Add to wishlistDelete from wishlist
Cite this document
Summary
The paper "Trade Agreement - USA and the Dominican Republic" deals with the protection of the domestic industry from foreign competition. It explores the Dominican Republic-Central the America-United States free trade agreement and Dominican Republic's trade advantages…
Download full paperFile format: .doc, available for editing
HIDE THIS PAPERGRAB THE BEST PAPER93.6% of users find it useful 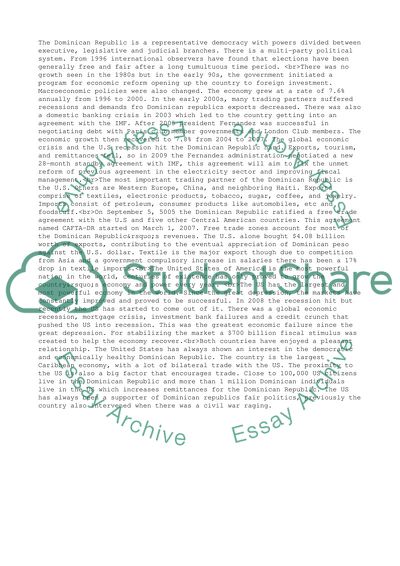 Download file to see previous pages The Dominican Republic is a representative democracy with powers divided between executive, legislative and judicial branches. There is a multi-party political system. From 1996 international observers have found that elections have been generally free and fair after a long tumultuous time period.
There was no growth seen in the 1980s but in the early 90s, the government initiated a program for economic reform opening up the country to foreign investment. Macroeconomic policies were also changed. The economy grew at a rate of 7.6% annually from 1996 to 2000. In the early 2000s, many trading partners suffered recessions and demands fro Dominican republics exports decreased. There was also a domestic banking crisis in 2003 which led to the country getting into an agreement with the IMF. After 2005 president Fernandez was successful in negotiating debt with Paris club member governments and London Club members. The economic growth then recovered to 7.8% from 2004 to 2007. The global economic crisis and the U.S recession hit the Dominican Republic hard. Exports, tourism, and remittances fell, so in 2009 the Fernandez administration negotiated a new 28-month standby agreement with IMF, this agreement will aim to fix the unmet reform of previous agreement in the electricity sector and improving fiscal management.
The most important trading partner of the Dominican Republic is the U.S. Others are Western Europe, China, and neighboring Haiti. Exports comprise of textiles, electronic products, tobacco, sugar, coffee, and jewelry. Imports consist of petroleum, consumer products like automobiles, etc and foodstuff.
On September 5, 5005 the Dominican Republic ratified a free trade agreement with the U.S and five other Central American countries. This agreement named CAFTA-DR started on March 1, 2007. Free trade zones account for most of the Dominican Republic’s revenues. The U.S. alone bought $4.08 billion worth of exports, contributing to the eventual appreciation of Dominican peso against the U.S. dollar. Textile is the major export though due to competition from Asia and a government compulsory increase in salaries there has been a 17% drop in textile imports.
The United States of America is the most powerful nation in the world, centuries of existence has only proved to grow the country’s economy and power every year.
The US has the largest and most powerful economy in the world. Since the great depression, the markets have constantly improved and proved to be successful. In 2008 the recession hit but recently the US has started to come out of it. There was a global economic recession, mortgage crisis, investment bank failures and a credit crunch that pushed the US into recession. This was the greatest economic failure since the great depression. For stabilizing the market a $700 billion fiscal stimulus was created to help the economy recover.
Both countries have enjoyed a pleasant relationship. The United States has always shown an interest in the democratic and economically healthy Dominican Republic. The country is the largest Caribbean economy, with a lot of bilateral trade with the US. The proximity to the US is also a big factor that encourages trade. Close to 100,000 US citizens live in the Dominican Republic and more than 1 million Dominican individuals live in the US which increases remittances for the Dominican Republic. The US has always been a supporter of Dominican republics fair politics, previously the country also intervened when there was a civil war raging. ...Download file to see next pagesRead More
Share:
Tags
Cite this document
(“Trade Agreement: USA and Dominican Republic Term Paper”, n.d.)
Trade Agreement: USA and Dominican Republic Term Paper. Retrieved from https://studentshare.org/business/1437824-trade-agreement

CHECK THESE SAMPLES OF Trade Agreement - USA and Dominican Republic

... of some region compared to other and consumer tastes and preferences. Developing economies are experiencing lower costs of production of various commodities. Korea, China, Indonesia and India, for example produce services and goods at very low costs compared to EU and USA’s. This has led to the developed regions placing high levels of restrictions to the Asian countries. A major product component that’s very common in the current world’s international trade is oil and petroleum products. For instance in 2005 alone, USA utilised about 26 barrels of oil per single day. American usually imports natural gas liquids, refined commodities and crude oil. Very big amounts are brought into the world market by a group of nations under the umbrella...
6 Pages(1500 words)Coursework

CAR is known to be one of the poorest nations in the African continent, apart from its frequent dependence on international donations in terms of food, clothing and medicinal supplies, CAR has also been a war zone for decades. The essay will relay more information on the various plights that children born in the Central African Republic go through while growing up.
Apart from most of the children being orphaned at a tender age due to maternal related problems or diseases such as HIV/AIDS, which is rampant in the nation, most of these children are victims of child trafficking, which is big business in the CAR (Lindborg). Lots of children from as little as 4 years normally go missing without a trace and the fact that the govern...
7 Pages(1750 words)Term Paper
sponsored ads
Save Your Time for More Important Things
Let us write or edit the coursework on your topic "Trade Agreement - USA and Dominican Republic" with a personal 20% discount.
GRAB THE BEST PAPER

Let us find you another Coursework on topic Trade Agreement - USA and Dominican Republic for FREE!