Comments (1)
Add to wishlistDelete from wishlist
Cite this document
Summary
In the paper “The Business Cycle & Policy Response in France” the author analyzes the economy of France, the GDP of France in the past 20 years and the data to determine the economic state of the country. The analysis will also cover a considerable government response to the economic problem…
Download full paperFile format: .doc, available for editing
HIDE THIS PAPERGRAB THE BEST PAPER91% of users find it useful 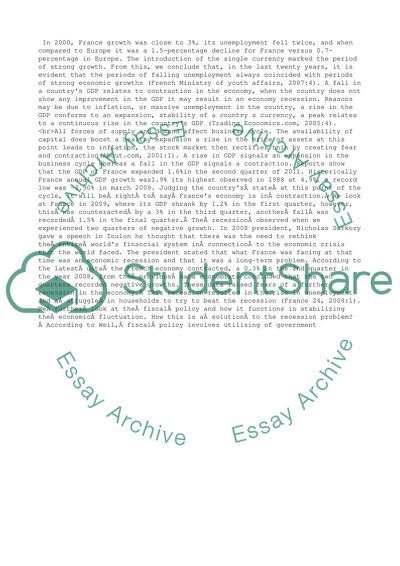 Extract of sample "The Business Cycle & Policy Response in France"

Download file to see previous pages In 2000, France growth was close to 3%, its unemployment fell twice, and when compared to Europe it was a 1.5-percentage decline for France versus 0.7-percentage in Europe. The introduction of the single currency marked the period of strong growth. From this, we conclude that, in the last twenty years, it is evident that the periods of falling unemployment always coincided with periods of strong economic growths (French Ministry of youth affairs, 2007:4). A fall in a country's GDP relates to contraction in the economy, when the country does not show any improvement in the GDP it may result in an economy recession. Reasons may be due to inflation, or massive unemployment in the country, a rise in the GDP conforms to an expansion, stability of a country s currency, a peak relates to a continuous rise in the country’s GDP (Trading Economics.com, 2005:4).
All forces of supply and demand affect business cycle. The availability of capital does boost a healthy expansion a rise in the price of assets at this point leads to inflation, the stock market then rectifies this by creating fear and contraction(About.com, 2001:1). A rise in GDP signals an expansion in the business cycle whereas a fall in the GDP signals a contraction. Reports show that the GDP of France expanded 1.6%in the second quarter of 2011. Historically France annual GDP growth was1.9% its highest observed in 1988 at 4.9%, a record low was -3.90% in march 2009. Judging the country's state at this point of the cycle, it will be right to say France’s economy is in contraction. We look at France in 2009, where its GDP shrank by 1.2% in the first quarter, however, this was counteracted by a 3% in the third quarter, another fall was recorded 1.5% in the final quarter. The recession observed when we experienced two quarters of negative growth. In 2008 president, Nicholas Sarkozy gave a speech in Toulon he thought that there was the need to rethink the entire world’s financial system in connection to the economic crisis that the world faced. The president stated that what France was facing at that time was an economic recession and that it was a long-term problem. According to the latest data the French economy contracted, a 0.3% in the 2nd quarter in the year 2008, from the previous data economists concluded that the two quarters recorded negative growths. These data raised fears of a further recession in the economy. This recession resulted in the rise in unemployment and a struggle in households to try to beat the recession (France 24, 2008:1). We further look at the fiscal policy and how it functions in stabilizing the economic fluctuation. How this is a solution to the recession problem? According to Weil, fiscal policy involves utilising of government ...Download file to see next pagesRead More
Share:
Tags
Cite this document
(“The Business Cycle & Policy Response in France Coursework”, n.d.)
Retrieved from https://studentshare.org/business/1434211-the-business-cycle-and-policy-response-in-france

ub
ublick added comment 1 year ago
Student rated this paper as
This coursework was always my weak point. I could never complete it well. Still, after I found this particular essay, I understood how it should be done. So, I performed my research afterward and completed the coursework in several hours, instead of days as it was previously.

CHECK THESE SAMPLES OF The Business Cycle & Policy Response in France

... that business ethics has now become a component limited to theoretical policies and frameworks of business organizations, and such principles and ideologies although enable an organization to acquire income in a fair manner, however, it is now fading gradually from the business sectors. Brief analysis (Chadwick & Schroeder, pp. 11-18, 2002) has indicated that a set of ethical principles exist in almost every business organization globally; however, executives are not ensuring its implementation on ground reality level. For such reason, a number of researchers (Crane, pp. 43-48, 2007) are putting efforts to analyze different practices of business organizations in light of ethical theories and frameworks that has become a major concern...
10 Pages(2500 words)Case Study

...Introduction Globalization, one of the most hotly debated issues means global capitalism to some while others consider it to be the continuation of modernism with the forces of wealth, progress, democracy and happiness at play (Kellner, 2002). Globalization is considered to be beneficial which promotes economic prosperity, cultural diversity and technological advancement. According to the critical social theory, technology and capital work together to create a new globalized and interconnected world. While each force of globalization is important, technological revolution has impacted the business models, value creation and differentiation (Spelman, 2010). The cloud computing technologies that have made the popular social networking...
7 Pages(1750 words)Coursework
sponsored ads
Save Your Time for More Important Things
Let us write or edit the coursework on your topic "The Business Cycle & Policy Response in France" with a personal 20% discount.
GRAB THE BEST PAPER

Let us find you another Coursework on topic The Business Cycle & Policy Response in France for FREE!