Comments (0)
Add to wishlist Delete from wishlist
Cite this document
Summary
The paper is devoted to the investigation of the Apple Incorporated’s Performance. Different perspectives of the applicable strategies and business models to deliver results achieved at the company today are discussed in the paper. …
Download full paper File format: .doc, available for editing
HIDE THIS PAPERGRAB THE BEST PAPER96.5% of users find it useful 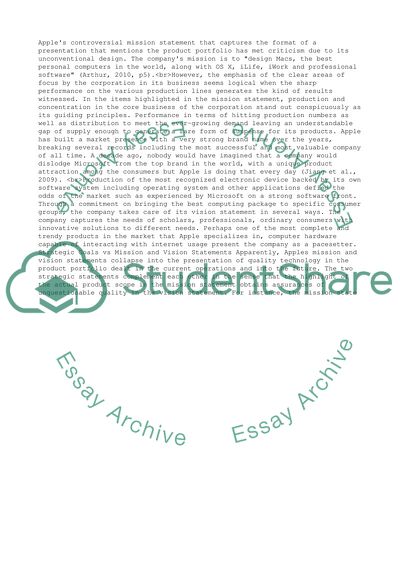 Download file to see previous pages Apple’s controversial mission statement that captures the format of a presentation that mentions the product portfolio has met criticism due to its unconventional design. The company’s mission is to “design Macs, the best personal computers in the world, along with OS X, iLife, iWork and professional software” (Arthur, 2010, p5).
However, the emphasis of the clear areas of focus by the corporation in its business seems logical when the sharp performance on the various production lines generates the kind of results witnessed. In the items highlighted in the mission statement, production and concentration in the core business of the corporation stand out conspicuously as its guiding principles. Performance in terms of hitting production numbers as well as distribution to meet the ever-growing demand leaving an understandable gap of supply enough to generate a rare form of suspense for its products. Apple has built a market presence with a very strong brand name over the years, breaking several records including the most successful and most valuable company of all time. A decade ago, nobody would have imagined that a company would dislodge Microsoft from the top brand in the world, with a unique product attraction among the consumers but Apple is doing that every day (Jiang et al., 2009).
Production of the most recognized electronic device backed by its own software system including operating system and other applications defied the odds of the market such as experienced by Microsoft on a strong software front. Through a commitment on bringing the best computing package to specific consumer groups, the company takes care of its vision statement in several ways. The company captures the needs of scholars, professionals, ordinary consumers with innovative solutions to different needs. Perhaps one of the most complete and trendy products in the market that Apple specializes in, computer hardware capable of interacting with internet usage present the company as a pacesetter. Strategic Goals vs Mission and Vision Statements Apparently, Apples mission and vision statements collapse into the presentation of quality technology in the product portfolio dealt in the current operations and into the future. The two strategic statements complement each other in the sense that the highlight of the actual product scope in the mission statement obtains assurances of unquestionable quality in the vision statement. For instance, the mission state ...Download file to see next pages Read More
Share:
Tags
Cite this document
(“Analysis of Apple Incorporateds Performance Research Paper”, n.d.)
Analysis of Apple Incorporateds Performance Research Paper. Retrieved from https://studentshare.org/business/1401098-analysis-of-apple-incorporateds-performance

CHECK THESE SAMPLES OF Analysis of Apple Incorporateds Performance

Social capital has an important role in the goal-attainment of actors through the support of relationships. Actors could either be individual people or groups such as firms and other organizations. In groups, the social relations matter most between, and not within, the groups (ibid). Apparently, it cannot be discounted that within the group and individual has social capital in associations between people, yet then the significant actors are the members of an organization, not the organization as a whole. Like physical and human capital, social capital also demands investment to construct.
Entrepreneurs and managers nowadays are venturing into the realm of social capital because of two important elements that trail with it, w...
10 Pages (2500 words) Assignment

iPhone became one of the most discussed new technology products, surpassing the wider coverage of other very well-known mobile phones that have been playing the best roles in the market. When Apple CEO Steve Jobs stood on the stage at the Macworld Expo in San Francisco and announced “We’re going to make some history together; Today Apple is going to reinvent the phone” (Jobs 2007), it could really influence...
8 Pages (2000 words) Case Study

In th...
8 Pages (2000 words) Case Study
sponsored ads
Save Your Time for More Important Things
Let us write or edit the research paper on your topic "Analysis of Apple Incorporateds Performance" with a personal 20% discount.
GRAB THE BEST PAPER

Let us find you another Research Paper on topic Analysis of Apple Incorporateds Performance for FREE!