Comments (0)
Add to wishlistDelete from wishlist
Cite this document
Summary
As the paper outlines, the Company International Commitments Ltd. in the year 2011 had net sales of € 13,193,000, which seems to show that the company is a large scale company. The cost of goods sold represents 30.7% of the net sales and other expenses comprise around the same of 30.6% of the net sales…
Download full paperFile format: .doc, available for editing
HIDE THIS PAPERGRAB THE BEST PAPER95.8% of users find it useful 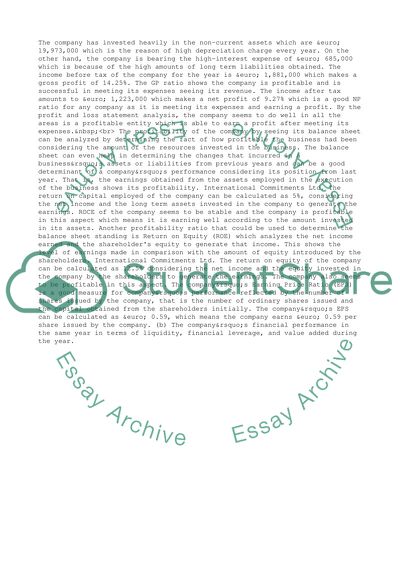 Extract of sample "Profitability of the Company International Commitments Ltd"

Download file to see previous pages The company has invested heavily in the non-current assets which are € 19,973,000 which is the reason of high depreciation charge every year. On the other hand, the company is bearing the high-interest expense of € 685,000 which is because of the high amounts of long term liabilities obtained. The income before tax of the company for the year is € 1,881,000 which makes a gross profit of 14.25%. The GP ratio shows the company is profitable and is successful in meeting its expenses seeing its revenue. The income after tax amounts to € 1,223,000 which makes a net profit of 9.27% which is a good NP ratio for any company as it is meeting its expenses and earning a profit. By the profit and loss statement analysis, the company seems to do well in all the areas is a profitable entity which is able to earn a profit after meeting its expenses.
The profitability of the company by seeing its balance sheet can be analyzed by determining the fact of how profitable the business had been considering the amount of the resources invested in the business. The balance sheet can even help in determining the changes that incurred in a business’s assets or liabilities from previous years and can be a good determinant of a company’s performance considering its position from last year. That is, the earnings obtained from the assets employed in the execution of the business shows its profitability. International Commitments Ltd. The return on capital employed of the company can be calculated as 5%, considering the net income and the long term assets invested in the company to generate the earnings. ROCE of the company seems to be stable and the company is profitable in this aspect which means it is earning well according to the amount invested in its assets. Another profitability ratio that could be used to determine the balance sheet standing is Return on Equity (ROE) which analyzes the net income earned and the shareholder's equity to generate that income. This shows the level of earnings made in comparison with the amount of equity introduced by the shareholders. International Commitments Ltd. The return on equity of the company can be calculated as 12.5% considering the net income and the equity invested in the company by the shareholders to generate the earnings. The company also seems to be profitable in this aspect. The company’s Earning Price Ratio (EPS) is a good measure for company’s performance reflected by the number of shares issued by the company, that is the number of ordinary shares issued and the capital obtained from the shareholders initially. The company’s EPS can be calculated as € 0.59, which means the company earns € 0.59 per share issued by the company. (b) The company’s financial performance in the same year in terms of liquidity, financial leverage, and value added during the year. ...Download file to see next pagesRead More
Share:
Tags
Cite this document
(“Corporate Finance Assignment: Financial Analysis Assignment”, n.d.)
Corporate Finance Assignment: Financial Analysis Assignment. Retrieved from https://studentshare.org/business/1400360-corporate-finance

CHECK THESE SAMPLES OF Profitability of the Company International Commitments Ltd

Efficiency and Profitability of Exxon Mobil

As a matter of fact, Hoffman’s statement that “international affairs is the nemesis of liberalism” has a grain of truth in it and this is especially so after the 9/11 incident.
There are two schools of thought or perspectives that are used to view international affairs: liberalism and realism. The study of these two perspectives is significant to the idea posed by Stanley Hoffman because they determine the reasons why international affairs, according to him, does not only see eye-to-eye with liberalism but seems to stand on the opposing side of it.
Liberalism can be defined as having four elements: citizens; the legislature; property rights, and; a market-driven economy (Dunne 186). Realism, on the othe...
6 Pages(1500 words)Assignment
sponsored ads
Save Your Time for More Important Things
Let us write or edit the assignment on your topic "Profitability of the Company International Commitments Ltd" with a personal 20% discount.
GRAB THE BEST PAPER

Let us find you another Assignment on topic Profitability of the Company International Commitments Ltd for FREE!