Comments (0)
Add to wishlistDelete from wishlist
Cite this document
Summary
This paper analyzes International Business Machines Corporation. This is the third-largest publicly traded technology American Multi-national Corporation, with it’s headquartered in New York, USA (Benjamin, 2010). The company is based in the IT industry…
Download full paperFile format: .doc, available for editing
HIDE THIS PAPERGRAB THE BEST PAPER97.6% of users find it useful 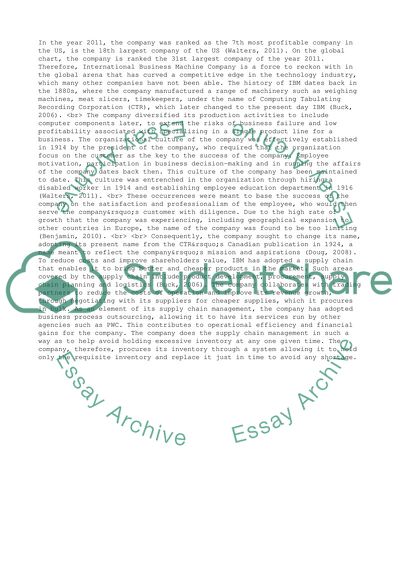 Download file to see previous pages In the year 2011, the company was ranked as the 7th most profitable company in the US, is the 18th largest company of the US (Walters, 2011). On the global chart, the company is ranked the 31st largest company of the year 2011. Therefore, International Business Machine Company is a force to reckon with in the global arena that has curved a competitive edge in the technology industry, which many other companies have not been able. The history of IBM dates back in the 1880s, where the company manufactured a range of machinery such as weighing machines, meat slicers, timekeepers, under the name of Computing Tabulating Recording Corporation (CTR), which later changed to the present day IBM (Buck, 2006).
The company diversified its production activities to include computer components later, to extend the risks of business failure and low profitability associated with specializing in a single product line for a business. The organizational culture of the company was effectively established in 1914 by the president of the company, who required that the organization focus on the customer as the key to the success of the company. Employee motivation, participation in business decision-making and in running the affairs of the company dates back then. This culture of the company has been maintained to date. This culture was entrenched in the organization through hiring a disabled worker in 1914 and establishing employee education department in 1916 (Walters, 2011).
These occurrences were meant to base the success of the company on the satisfaction and professionalism of the employee, who would then serve the company’s customer with diligence. Due to the high rate of growth that the company was experiencing, including geographical expansion to other countries in Europe, the name of the company was found to be too limiting (Benjamin, 2010).

Consequently, the company sought to change its name, adopting its present name from the CTR’s Canadian publication in 1924, a name meant to reflect the company’s mission and aspirations (Doug, 2008). To reduce costs and improve shareholders value, IBM has adopted a supply chain that enables it to bring better and cheaper products in the market. Such areas covered by the supply chain include product development, procurement, supply chain planning and logistics (Buck, 2006). The company collaborates with trading partners to reduce the costs of operation and improve its revenue growth, through negotiating with its suppliers for cheaper supplies, which it procures in bulk. As an element of its supply chain management, the company has adopted business process outsourcing, allowing it to have its services run by other agencies such as PWC. This contributes to operational efficiency and financial gains for the company. The company does the supply chain management in such a way as to help avoid holding excessive inventory at any one given time. The company, therefore, procures its inventory through a system allowing it to hold only the requisite inventory and replace it just in time to avoid any shortage. ...Download file to see next pagesRead More
Share:
Tags
Cite this document
(“Operations Management Term Paper Example | Topics and Well Written Essays - 2500 words”, n.d.)
Retrieved from https://studentshare.org/business/1396720-operations-management

As a matter of fact, Hoffman’s statement that “international affairs is the nemesis of liberalism” has a grain of truth in it and this is especially so after the 9/11 incident.
There are two schools of thought or perspectives that are used to view international affairs: liberalism and realism. The study of these two perspectives is significant to the idea posed by Stanley Hoffman because they determine the reasons why international affairs, according to him, does not only see eye-to-eye with liberalism but seems to stand on the opposing side of it.
Liberalism can be defined as having four elements: citizens; the legislature; property rights, and; a market-driven economy (Dunne 186). Realism, on the othe...
6 Pages(1500 words)Assignment
sponsored ads
Save Your Time for More Important Things
Let us write or edit the term paper on your topic "International Business Machines Corporation" with a personal 20% discount.
GRAB THE BEST PAPER

Let us find you another Term Paper on topic International Business Machines Corporation for FREE!